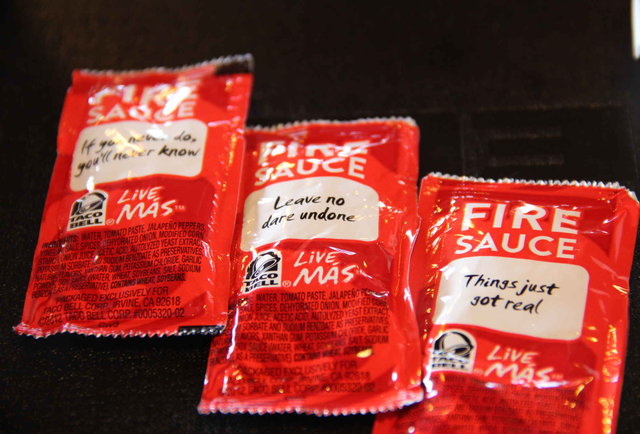 After reading the Huffington Post article "Surviving Whole Foods," the author realized he doesn't really have those kinds of problems because he doesn't go to Whole Foods. So he decided to write about one of the places he did go to, last Saturday, after the college football games, and also a bunch of times before that.

Taco Bell is like Vegas. You go there to feel good and you leave with tons of dollars in your pockets, not to mention tons of Dollar Menu in your stomach. It's so good!

Taco Bell's clientele are all about mindfulness and compassion all the time, because the line moves really fast, and there are plenty of tacos for everybody. In fact they've probably never run out of tacos ever. So even when you're standing next to a bunch of teenagers whose boisterousness would normally intimidate you, you're like, "it's cool, we're all here for one thing: tacos."

As you pull the glass door open you are immediately smacked in the face by a wall of things that smell like tacos or other things that have taco components in them. And also pizza and fried chicken if you're in a Taco Bell-Pizza Hut-KFC. You leave behind everything that doesn't smell like tacos, and pizza and fried chicken if they're present. Seriously, think about Taco Bell and Heaven: it is easier for a camel to pass through the eye of a needle than for a rich man to spend more than $12 here. Okay one time $16.32.

The first thing you see are people eating tacos, and Mexican Pizzas, and a few quesadillas, which are great and totally under-appreciated. Did you know quesadilla is Spanish for pressed taco? Anyone who's ever seen how flat one is knows exactly what I'm talking about.

Next you see people waiting in line for tacos, etc. No, actually you see a condiment island with mild, hot, and fire sauces, which used to be next to the area where you wait for your order, but that got a little crowded, so they smartly moved it about ¾ of the way towards the ordering stations, in the middle of the restaurant. It's a nice way to separate the people who are eating tacos from the people who are waiting to eat tacos, so there's no jealousy.

Next you're in the line, which is roped off to keep things orderly, but again, everybody's pretty cool -- even the stooped over geriatric lady who you can't believe is even awake at 2am much less preparing to get her Gordita on remains unmolested by the exuberant NYU youths with their strange theater major jargon and man-earrings. 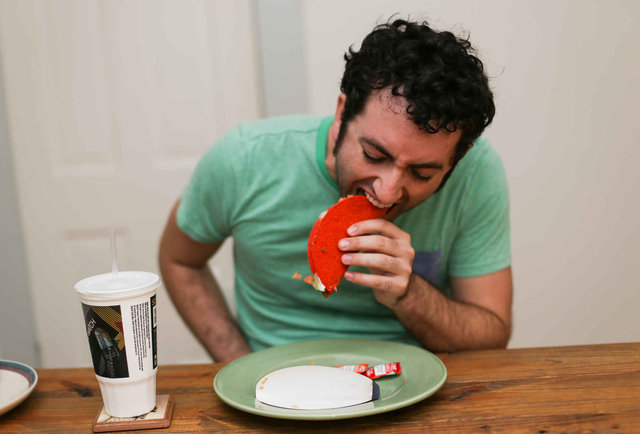 Pretty much nobody judges your beauty in here. 100 percent of the patrons are 100 percent less attracted to each other than they are to the prospect of Doritos Locos, which on the popular hotness scale of 1-10 are 100 percent. For $108, you could buy like 50 of them and hand them out to people and then everyone would think you were almost as beautiful as Doritos Locos.

Okay, counter time! Sometimes you really want the guys at the counter to judge you because you're having one of those $16.32 nights (well, the $16.32 night because that only happened once), but they never do, because hey, we've all been there. Once. These dudes are generally just super-chill and efficient. You halfway expect them to greet you with a totally non-smug "Namaste," which means "Greetings," with the implied message of "Be Bell."

Other things going on: Definitely no group cleanses. Why would you want to cleanse this? Keep it inside you forever! And the music is pretty solid. The first time I heard that Flo Rida song "Good Feeling" all the way through and not just a snippet at the end of Peyton Manning's Buick commercial was when I was waiting to try the Smothered Burrito for the first time. Both the song and the burrito were worth the wait!

But the wait's never long -- usually not much longer than a Flo Rida song, even if your order number is 274, or 152,000. Once you get your food you can't wait to get out of there, not because you don't like eating around other people who like Taco Bell (i.e., everybody but crazy people), but because you just got weirdly into Orange is the New Black and now you can't wait to watch as many episodes as you'll eat tacos. Six. No three.

For more of this author's musings, check out the complete writings of David Blend. And for more food news than you can shake a stick of butter at, there's Thrillist.com.