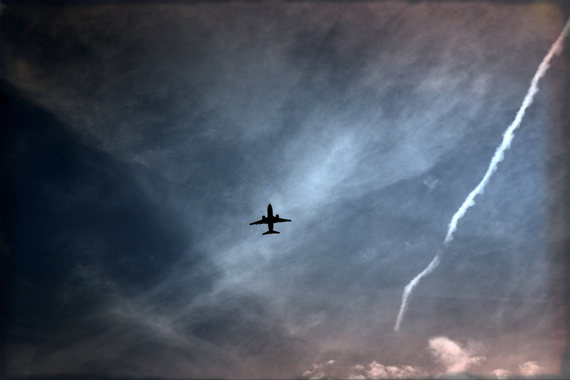 Face it, recent days were not a good time to be flying Delta Airlines. Bless its corporate heart, Delta was not really at fault when lightning struck the mothership computer - or whatever the heck happened that grounded flights all over the globe August 8th. But those of us hoping to get from Point A to Point B in the ensuing days had an adventuresome time of it.

It was an adventure of spontaneity and low expectations. That is, if you can live in the moment, and not expect too much of it, the next moment might see you advancing toward the goal. Sort of like trying to go from Mediterranean Avenue to Boardwalk with a couple of wild rolls of the dice, but without a Get Out of Jail Free card.

In my case, the goal was San Francisco, and I was rolling the dice in Atlanta. Initially, all seemed well. Repeated assurances that my 10:44 AM flight would be leaving on time plus receipt of my Confirmation Number and boarding pass led me to pack my bag and go to sleep with a happy heart. At 2:59 AM though - I learned a little later; I was not watching my phone for text messages at 2:59 AM - the digital gremlins who ruled the world for a while there decided to cancel my nonstop flight and re-book me on a 7:30 PM flight to Detroit with an eventual connection that would get me home to San Francisco around, oh, 3 AM with any luck. Not really great news. 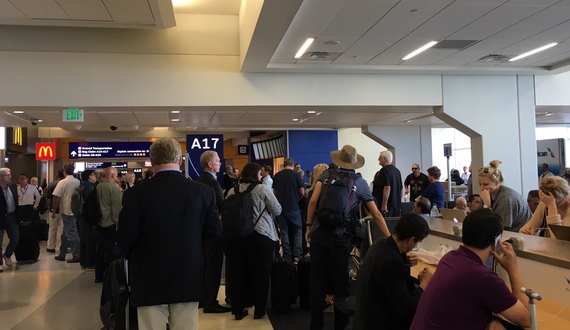 Unlike the probable majority of discombobulated Delta passengers, I had an ace in the hole: an American Airlines pilot son. In the midst of the Delta chaos, this was better than two hotels on Boardwalk. Although he was somewhere between Miami and San Juan, Puerto Rico on another plane himself, he was able to get me onto a flight to Dallas and subsequently thence to San Francisco in time for dinner.

The stories swirling around all those terminals, in all those airports throughout all that time could fill a bunch of books.

There was the woman in a tan polka-dot dress who spoke an unrecognizable language - something not quite Spanish - and no English. In the time she and I shared a waiting area at Gate A-17 at least three different passengers responded to her bewilderment in mysterious tongues, in attempts to help or understand. Yours truly tried pointing to our respective boarding passes (for cancelled flights) but was of zero help. An agent, one hopes and believes, eventually materialized and got her onto a plane flying in the right direction.

There was a mother with two small children and a baby in an over-the-shoulder baby-carrier who said, into her phone, "I couldn't have left it at the hotel! It has to be in the car!" Oh please, I thought, let it be in the car where presumably her husband can find it and all will be well.

And there were more than a few snippets of conversation, as I was passing by: "yesterday... I know, but I couldn't get there..." or "we need to postpone it to tomorrow, or Friday..." Postponement was the order of the day.

What was missing, in the stories of frustration and anxiety I overheard, was this: anger. Anger was probably very much present in the first chaotic day or two. But as the global chaos settled down I was reminded of another time of airport chaos.

It was a flight from San Francisco to Portland on September 14, 2001, on either the first or second day that commercial flights were back in the air after 9/11. Lines waiting to go through security stretched the length of the terminal, and moved at a snail's pace. But the mood was all kindness and tolerance. We shared stories about friends lost or stranded, or about our own fortunes. We held places in line for people who needed a bathroom break, we brought each other lattes.

Delta's momentary blip is in no way comparable to the tragedy of 9/11, and this writer saw only a tiny blip of the aftermath. But it is somehow reassuring to believe that the human spirit can survive small inconvenience as well as major chaos - with a little patience, grace and kindness. Considering the major chaos of these days, especially between now and election day, we're going to need a lot of all three.