WASHINGTON, DC -- A shocking report by Amnesty International found not a single state in the U.S. has laws that meet international human rights standards for "use of force" by police officers.

So it should come as no surprise that watchdog groups estimate an unfathomable 1000+ Americans are killed every year by American police officers without any real consequences whatsoever.

If we are to take the daily uploads of citizen taken videos and watchdog reports as evidence -- we can see we now have a culture in law enforcement where demanding total obedience has become a priority over public safety. Comply or face death. We see it in the deaths of individuals like Michael Brown, Eric Garner, Kelly Thomas, Rekia Boyd, Ezell Ford, Tamir Rice and so many others.

The Amnesty report provides much needed context after it was announced there will no charges for a Michigan police officer who escalated a disagreement with an unarmed teenager into violence which ended when the officer shot 17-year-old Deven Guilford seven times after a questionable traffic stop.

Yesterday I released a short (emotional) commentary including the raw footage of 17-year-old Deven Guilford's death at the hands of what was in my opinion, a law enforcement officer with his motives and priorities completely upside down.

WARNING: what you are about to watch is disturbing -- viewer discretion advised. 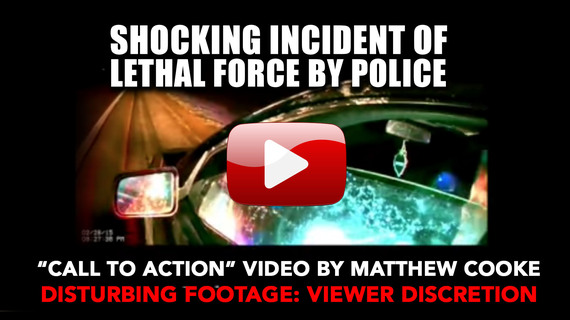 You can sign Amnesty's petition to support police and citizens by creating guidelines and "deadly force" laws by CLICKING HERE.

This is the first of my SURVIVORS GUIDE TO EARTH series on HuffPo... pressing calls to action, satirical news and best practices to make our short visit to this tiny blue planet worthwhile.