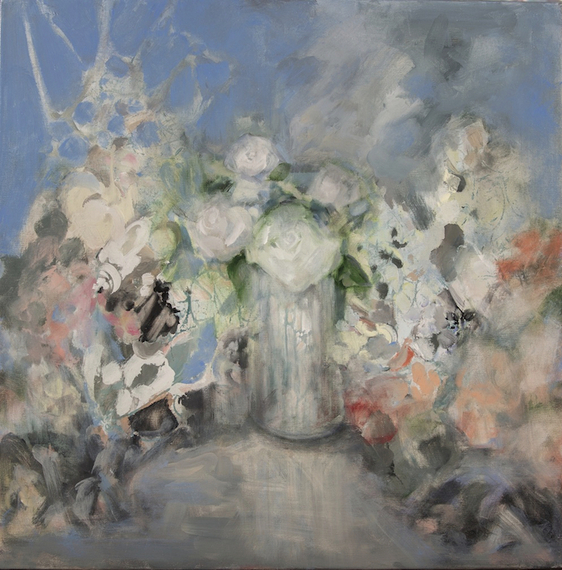 In recent times, few painters have made substantive strides in the field of floral and still life painting. One such artist is Susan Breen. At first glance, viewers are often drawn in by the mood of the work, which can be anything from somber or heavy-hearted to spiritually uplifting and enlightening. Breen accomplishes this wide array of effects with various types of paint applications, a unique approach to color and a desire to capture the essence of the forms without going too far past the recognizable.

The following is a series of questions that I hope will clarify her approach and intentions.

DDL: I've noticed in a good portion of your later works that the floral areas are mapped out with a series of rhythmic dark lines. Aside from suggesting contours, these gestures in line have something of a retro feel - a near 1970s illustrative technique that is both celebratory and edgy. Is there a source of this inspiration? 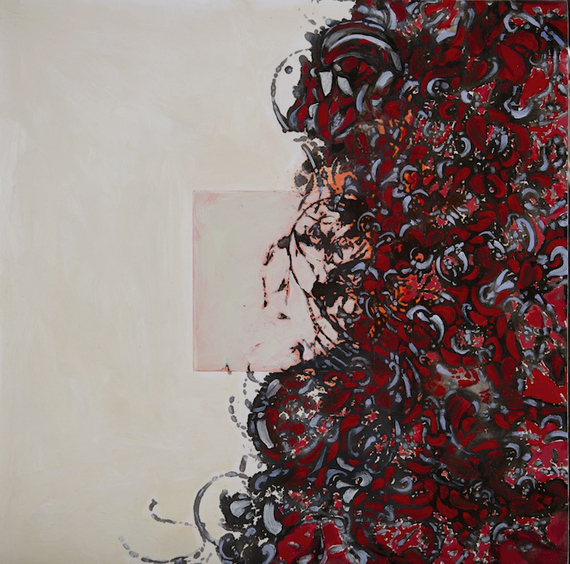 SB: It's interesting you bring up the 1970s - and thinking about it now, I might find some visual cues further back to the late 1960s. I started these paintings several years ago, though the finished pieces are quite different from where they began. In 2010 I was working on a collaborative project to later be exhibited at The Andy Warhol Museum. I'd prepped 20 pieces of paper and began working on them simultaneously, then honed in on the ones that felt most promising. My goal was to select three good paintings from the 20. Because of the specifications of the project they were all sized 12 inches square to represent the size of an LP, and because they were ultimately intended to be screen prints, they had a certain graphic quality to them. That, and the idea behind the project, was a nod to Warhol's work.

When I chose the final image for the show, I still had all of these other paintings in varied states of completion, and since I was excited to start a new series I set the paper pieces aside and quickly forgot about them. When I did pull them out again a couple of years later, I realized that a few were only the very beginnings of paintings - nothing fully realized, very little paint, some only had a square painted in the center - pure geometric abstraction. I was in a completely different head space by then and my first impulse, which I acted on, was to destroy the square in some way, to deconstruct it, because it represented a sense of order I wasn't experiencing - the dark lines you mention served that purpose. 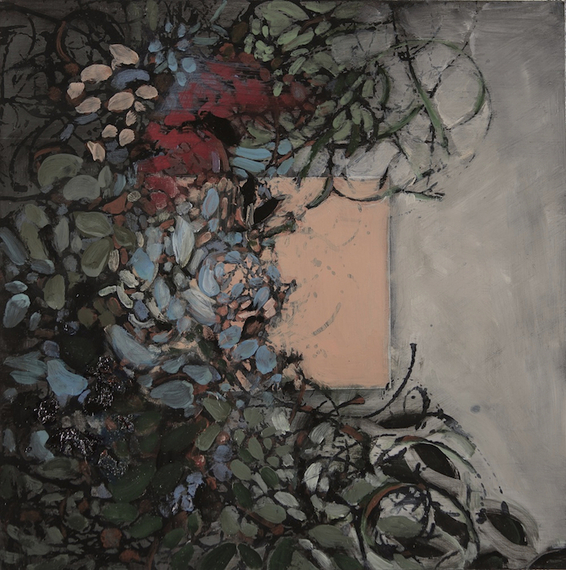 I was also actively thinking about those lines as circuitry, a web of unseen connections between all things. Structurally, the lines set up an architecture for the painting, an armature on which to hang other organic forms, but painted in a way that involved chance, tried to mimic organic growth patterns, movement and hint at some phenomena taking place. The lines symbolically represent struggle, or support, or division, or some force of ruin. Each piece determines the utility of the line, and tries to retain that organic sense of chance. But maybe there is also some latent tie in to a certain aesthetic of that time, to postminimalism - Eva Hesse. I can see that.

DDL: I do see the link to Warhol's 'blotted line' drawing technique he developed around 1950 for his commercial art career. I was thinking of that and how similar aesthetics developed over time right up through the seventies. He was and still is an incredible influence on both commercial and fine art. The fact that you are using the dark lines to their optimum effect in terms of the emotive beat in the narrative is key. I can also see the postminimal tie in. Eva Hesse - she died so young - I often wonder how much she would have changed the face of the art world had she lived past 1970.

Another artist I think of when I see your work is Odilon Redon. Your still life and tree-based paintings have a lot of that same magical realism. It's almost as if we are seeing these sights for the first time through the eyes of flying insect. All of the senses are mixed in and through color, light and form. 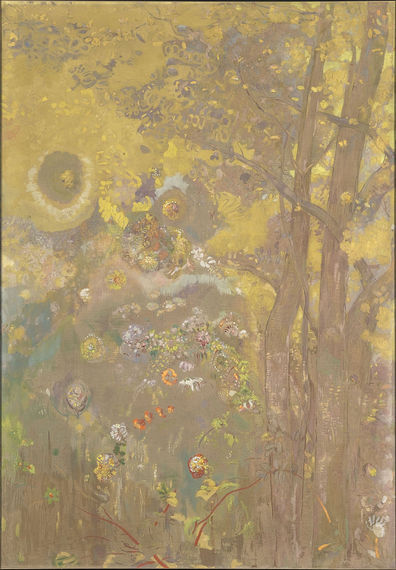 Odilon Redon, Arbres sur un fond jaune, one of the panels painted in 1901 for the dining room of the Château de Domecy-sur-le-Vault, Wikipedia

SB: Yes, Redon! The Symbolists, mysticism, alchemy, synesthesia, all intrigue me. And flight. Redon's an artist whose work lodged in my brain very early on; he delved so far into the human psyche. And I only just very recently began thinking about him again - that fantastic assertion that his "...originality consists of putting the logic of the visible to the service of the invisible." Right? 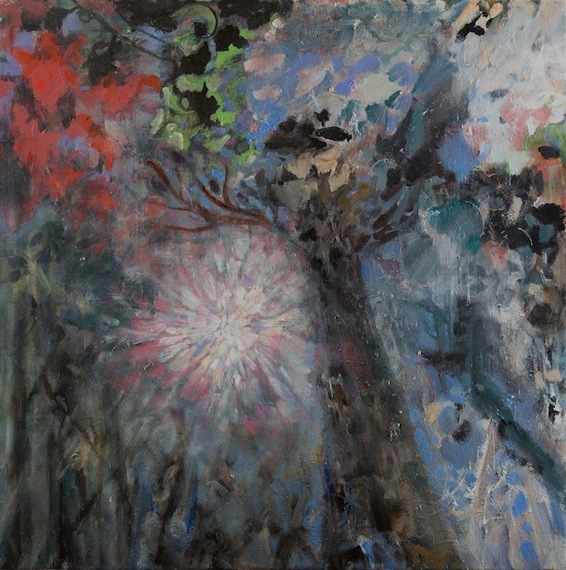 DDL: Yes, the creative process without the filtering and the fantasizing is just plain ordinary. Sometimes the transformation of a subject by the artist can be quite spiritual, even otherworldly. I'm thinking, with a good portion of your work, there is an inner glow, maybe a knowing or enlightened state, or some form of energy represented by light or movement. I also get the feeling, with works like Square XV (2015), that you are suggesting alien or foreign intelligence. Then, in a slightly earlier painting, Square VIII (2015), I see more of a transition or state of flux between Minimal and say Pop Art. This seems to be another big part of your work over the years, a design element that challenges concept and composition. In both instances, however, there is something like a conversation going on. Can you tell me more about what you are processing mentally when painting? Is it automatic and instinctive, or are there many studies and much planning or forethought? 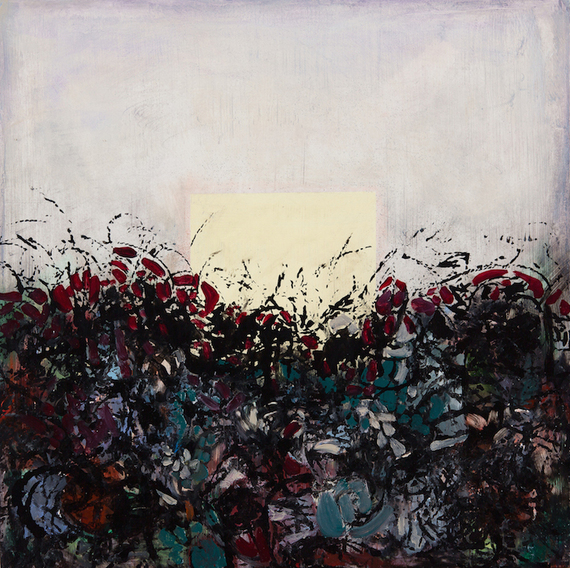 SB: It's true, I'm obsessed with the representation of energy, that light. And implied forces that set elements of the composition into a kind of perceived motion or shift or transformation - in a sense, the invisible made visible.

That idea of a conversation is really compelling. I do want that dynamic. Though things are always shifting, I'll usually set up some conceptual or physical construct to respond to, and then try to approach it from whatever angle comes to me in the process. I might find that my direction is about light, or the dimensions of the piece, or color, or some abstract idea generated from that initial point of departure.

A while back I felt like I'd fallen too much in love with certain colors - that I was using them as a crutch. So I dropped them all from my palette until I was left with just black and white and sepia - I painted with this limited palette for many years, it became my conversation with the work. After that, for a while, I painted scenes I imagined took place either in the first or last light of day. Later on I decided I would repurpose anything I used in the studio, so I turned used sandpaper into palm-sized constellations, and the scrapings from my palette into these tiny dresses. Then I created a series of paintings that represented theoretical visual "remedies" for various ailments. And now, yeah, my recent work has focused on variations of the square, with landscape or still life paintings imagined through some kind of altered lens. 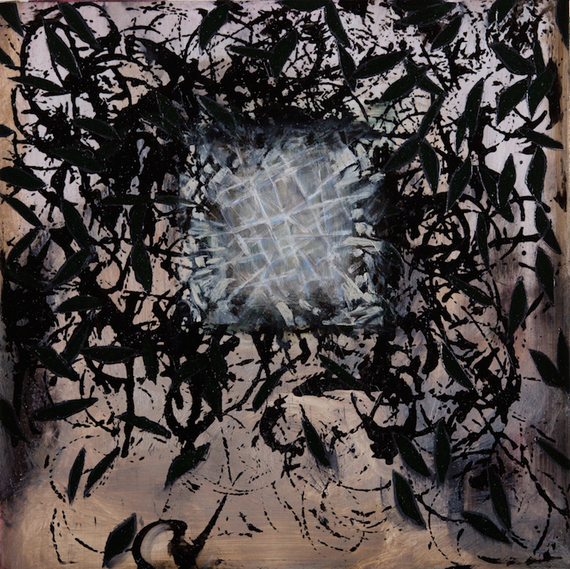 The bigger ideas aside, for individual pieces within a series, I definitely lean toward instinct - leave it open to process, chance operations, accidents. I let the paint guide the image. Once the painting is on its way, I shift into a more sustained intentional and meditative way of working. I don't do extensive preliminary studies, unless I'm away from my studio and struck by some idea or visual cue that I don't want to forget. But I am actively looking all the time. And because I work primarily in oils, and have no qualms about scraping or sanding down surfaces, I enjoy reworking images right on the support.

DDL: I like your approach - very organic and fluid and it shows in the work. Before we end this conversation I'd like to get to your starting point or subject matter - let's call it natural elements in the context of ones state of mind. Can you talk a little more about the pre-existing elements that inspire you, and why you think it triggers your creativity?

SB: You know, I've used the figure, interior space, camera obscura, different approaches to ruin, animals found roadside, shadows missing their object--all as starting points, I guess. Before, around, and throughout, I've never gotten over the elemental substance of nature, its dark beauty, horror, its material grace, and foundational structure.

Certain shapes and patterns pull and draw over and over again - leaf, vine, petal, tree, flower, or the night sky - and my paintings extend from that base. I can't help but find them useful as vehicles, the paint's rudimentary vocabulary - the specific, fundamental ways of making marks, my language. 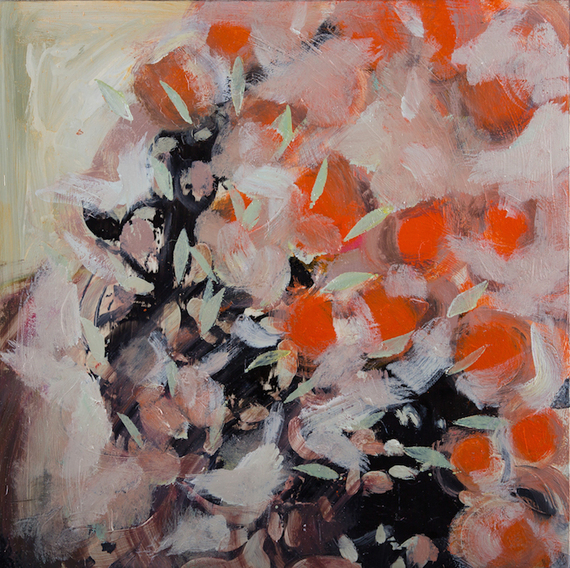 They just seem to take shape even as I try to work without any preconceived ideas.
So much happens intuitively, I can't come too close to an answer because if there were meaning that was obvious to me I'd scrap the work - but maybe natural elements are the baseline metaphor of human experience: life, growth, struggle, proliferation, death. They're safe and removed, even as they're altogether telling and biologically relevant. They spell us out even as they leave space for interpretation. We can see ourselves growing out of them.

I've painted representationally and abstractly, and have tried to operate inside this negative capability, this flux between different absolute states of uncertainty. You try things out, but it's always the space between ambiguity and perception that interests me the most. And somehow it comes back always to nature, however I abstract it. There is something appealing in taking natural elements that are sometimes too familiar, and defamiliarizing them, refracting them, slowing them down, or setting them in motion - layering and repeating and glazing over the organic forms to the point where they lose some of their former character, where they break down and bear a different integrity - as you likened it to the experience of an insect droning around and seeing something reductive and essential, consuming. The abstraction intends to activate them, to open them to experience while moving from any common identification. It's something unnamable and therefore newly seen and startling. 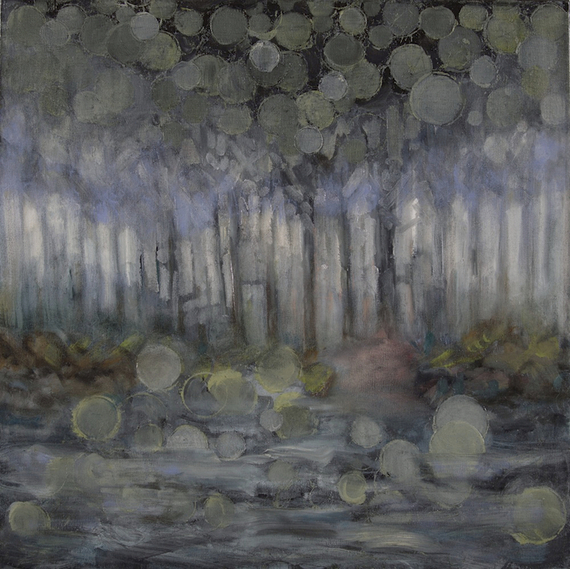 In May of this year, Susan Breen completed a two-person exhibition at Woodward Gallery in New York City with painter Margaret Morrison titled Both Ways. Breen has work included in the group show Going Big, curated by artists Suzan Shutan and Susan Carr, opening at the end of July at Central Booking, NYC. Publication of her work is forthcoming in The Encyclopedia Project (Vol. 3) and Still Point Arts Quarterly. Breen is currently working on a new series of paintings for an upcoming solo show at Woodward Gallery, to take place within the coming year.