As a close observer of the Obama administration, I have had my share of disagreements with how the White House has conducted its foreign policy and how the National Security Council staff has operated in relation to other departments and agencies in the national security bureaucracy.

The reset with Russia was a good idea at the time, but it died as soon as Vladimir Putin retook the chair in the presidential quarters. The administration's response to the Assad regime's chemical weapons attacks were at the least embarrassing and disjointed, and at most morally dubious and inept. The situation in Ukraine is a mess, despite the Minsk II ceasefire beginning to hold and heavy weapons pulling back from the contact line in the east two weeks after they were supposed to. And, while I'm a steadfast supporter of the administration's diplomacy with the Iranians over the nuclear issue, I tend to believe that President Obama himself should have reached out to members of Congress far more than he has over the past year and a half.

Susan Rice, as the U.S. Ambassador to the United Nations in Obama's first term and National Security Adviser in the second, is one senior official partly responsible for many of these mistakes. Criticizing how she does her job is fair game, just as it's fair game to blast Republicans in the House of Representatives for sticking to an uncompromising position on funding for the Department of Homeland Security.

Going after Susan Rice's personal integrity with hyperbole bordering on libel, however, is something else entirely, and should be condemned regardless of which political party you find yourself supporting.

I don't tend to read The New York Times in print anymore, so I didn't see Rabbi Shmuley Boteach's one-page ad on Susan Rice when it first came out. But the advertisement was all over Twitter minutes after it was released in the print edition, so I did have a chance to read it in its entirety. There's not much I can that is different from what the Anti-Dafamation League, the American Jewish Committee, the Israel Policy Forum, and the Conference of Presidents of Major Jewish Organizations have already said -- each of which condemned the ad as a smear attack that was wholly unwarranted -- so I'll just add the words "disgusting" and "vile" into the mix.

Rabbi Boteach could not only use a lesson in decency; he could also use a lesson on history. Yes, Susan Rice was a top official in the Clinton administration when hundreds of thousands of Tutsis and moderate Hutus were being butchered to death in Rwanda. And yes, acceding to her successor at the United Nations, Samantha Power, Rice shocked a roomful of NSC officials when she brought up the word "election" in the same sentence as "genocide," an event that Rice herself called "completely inappropriate" when she was asked about it. But Boteach ought to remember something else: despite her troubles with Rwanda, she was an incredibly vocal and unapologetic defender of Israel at the United Nations Security Council during her tenure as U.S. ambassador. 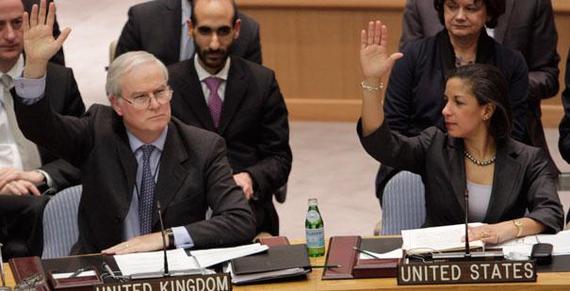 On February 18, 2011, despite every other member of the Security Council voting "yes" on a draft resolution condemning Israeli settlement building on Palestinian land in East Jerusalem and the West Bank, Rice raised her hand to block the language from being passed. This may not seem like a big deal three years later, but in today's context of supposedly fraying U.S.-Israel relationship, it's an event that should give us pause before certain quarters of the Jewish community start abrading Ms. Rice for being a careless diplomat insensitive to Israel's concerns -- or as a person who doesn't treat Israel with the kind of respect that a top U.S. ally deserves.

Here are two more examples. In late November, at the height of violence in the Gaza Strip between the Israel Defense Force and Hamas, the Security Council took up a presidential statement that, if passed, would have condemned the fighting in Gaza without explicitly referencing the hundreds of rockets that Hamas launched into Israeli communities. Susan Rice put her foot down on that draft statement as well, calling the language faulty for not taking into account what prompted the round of violence in the first place (i.e. Hamas rocket attacks on towns and cities in southern Israel). And, just for good measure, Ambassador Rice spoke loudly in opposition against President Mahmoud Abbas' campaign in the U.N. General Assembly to acquire non-member state status for Palestine -- a vote, by the way, that was supported by the vast majority of U.N. member states. Yet for Ambassador Rice and the United States at large, Palestine's status promotion was labeled as a roadblock to peace that prejudiced issues that instead should be part of direct Israeli-Palestinian negotiations.

"The backers of today's resolution say they seek a functioning, independent Palestinian state at peace with Israel. So do we," Rice said after the U.S. casted its "no" vote. "But we have long been clear that the only way to establish such a Palestinian state and resolve all permanent-status issues is through the crucial, if painful, work of direct negotiations between the parties."

If Susan Rice is the disrespectful, tone-deaf, Israel-skeptic that Rabbi Boteach believes, there is a good chance that she wouldn't have taken any of these measures at the United Nations. If Boteach's characterization of Rice is correct, she would have refrained form using America's veto power on the Security Council and allowed resolutions to be passed that would have placed Israel in a terrible situation in relation to the rest of the international community. That clearly hasn't happened, and Rice is to be thanked for it.

I don't agree with everything Susan Rice does; her management of the National Security Council is confusing, policy discussions tend to drag on with no action taken, and if three of Obama's former Defense Secretaries are to believed, staffers at the White House hold a disproportionate amount of power in the national security policymaking process. But what Rabbi Shmuley Boteach did in the The New York Times goes beyond all of that: the ad that he financed in the paper was a deliberate and scathing affront on her dignity. She doesn't deserve that.