So Bob Dylan sings in "Let Me Die in My Footsteps," a 1962 ballad Susan Roy quotes in "Bomboozled: How The US Government Misled Itself And Its People Into Believing They Could Survive a Nuclear Attack," her colorful new history of nuclear war propaganda and shelter-design beginning in the 1940s.

Roy, a former Managing Editor at Allure who took a hiatus from the magazine world to obtain a masters in architectural history from Columbia, became interested in the subject after seeing photographs of a "subterranean ranch home" in a 2003 issue of Nest.

That home, which still stands 25 feet below a two-story structure on a corner lot in Las Vegas, features a guesthouse, swimming pool, backyard and barbecue, as well as artificial lighting to simulate a "warm, sunny day" or a "crystal clear night." The project was the brainchild of architect Jay Swayze, a pioneer of elaborate, underground shelters, and he finished it some time in the early 1980s. An exhaust pipe extending a few feet above ground is the only evidence that the place still exists today.

"The surreal quality of those images stuck with me," Roy told The Huffington Post. "There's something so eerie about them." 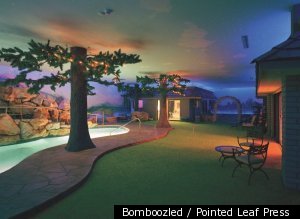 The photos set Roy off on an exhaustive research project, which began with a look at nuclear shelters throughout history but deepened into a more extensive examination of retro nuclear propaganda. "Once I went down that road, I just kept going," Roy said.

She collected archived material -- design blueprints, advertisements, newspaper cutouts, and photographs -- from anywhere and everywhere. A lot of it came from estate sales, she said. "After people died; their stuff gets tossed up on eBay."

And as she obtained more and more material from the shelter-craze, she tried to understand how Americans could possibly have believed that these flimsy, often absurdly-designed structures would keep them safe in a nuclear war.

"I put myself back in that time and tried to imagine it," she said. "These were years of progress; the economy was great, there was nothing but growth. The government wasn't treated as skeptically as it is now."

Roy's book, released on Tuesday, May 24, details the complex and fear-mongering roots of the shelter-craze, which stemmed from the atomic paranoia sweeping the nation in the late 1940s, perpetuated by Harry Truman's Federal Civil Defense Association (FCDA) and their comprehensive "nuclear safety" programs, pamphlets and exercises.

Quoting countless media outlets and elaborate doomsday scenarios from top scientists and reporters, Roy came to the conclusion that many assumed that World War III was all but inevitable. Films and novels were pumped out with titles like "Doomsday Eve" and "The Beast From 20,000 Fathoms," a film about a giant nuclear-spawned creature. Newspapers like the Buffalo Evening News ran top headlines exclaiming: "125,000 Known Dead, Downtown in Ruins" followed by a smaller-type headline: "Warning: This Didn't Happen ... But it Could!"

"People were scared," Roy said. They were asking: "What do we do? And how do we protect ourselves?"

The FCDA -- an early incarnation of our current Department of Homeland Security -- embarked on a series of missions aimed at allaying fears and providing solutions to nuclear catastrophe. Engineers created an entire neighborhood called "Doom Town," with street names like "Doomsday Drive," and cement bunkers with 12-inch-thick walls, which they tested with blasts. Officials developed the now-famous "Duck and Cover" campaign, a comic pamphlet on nuclear safety aimed at children (lie flat on the ground, shield your eyes with one arm and protect your head with the other arm!) They told people living in coastal cities that boats could be used as fallout shelters, as long as you "kept the boat moving" so radioactive material would be "blown away by the wind."

"The [FCDA] had neighborhoods elect 'wardens' and gave them classes on firefighting, first aid, and rescue missions," Roy said. "Volunteers would cover themselves in fake blood and the people being trained would pull them out of houses."

At first, the FCDA simply wanted families to designate a section of their home as a "nuclear refuge," but soon those sections became entirely separate structures, as ambitious patriarchs of suburban families began constructing elaborate shelters themselves, with help from detailed instruction manuals.

In her research, Roy was shocked at the variety materials used in shelter-design. "There were the classic cinder-block structures, but there were also shelters made of wood -- promoted by the wood industry -- and one was made of plastic!" Roy laughed. "Pod-shaped fiberglass, dome-shaped igloos, steel tubes, they came in so many different shapes." 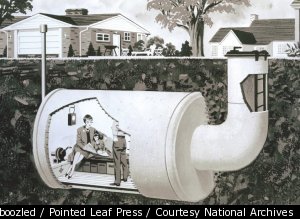 Roy estimates that maybe hundreds of thousands of personal shelters were constructed in the 1950s and early 1960s before the end of the Cuban Missile Crisis. Public shelters were created as well, stocked with supplies in warehouses across the country, large enough to fit huge swaths of major city populations.

Architects were hired to create elaborate underground complexes for wealthy clients. Some, like architect Jay Swayze, even lived in their shelters full-time. Swayze and his family hunkered down underground in Plainview, Texas, for close to four years.

Soon, Roy said, the trend faded. But it never went away entirely. "When Reagan was elected, he kind of cranked up the antagonism again, and got people scared."

Though we now look back on that time and laugh at the retro propaganda, Roy says, there are clear echoes of similar measures in the country today.

"If you would have said, back in 2000, that in order to get on an airplane you'd have to take off your shoes, put all your stuff in a plastic bag, and allow people to grope you, nobody would believe it."

To Roy, these security measures, like the FCDA programs of the 1950s, only exist to create a false illusion of safety. Security expert Bruce Schneier even coined a term for it in 2006: Security Theater.

Do shelters actually make anyone safer from nuclear devastation? Does increased airport security actually "secure" anything? In 2008, Jeffrey Goldberg, a writer for the Atlantic, was able to smuggle pocket knives, box cutters, rope, water and other materials onto an airplane. He even boarded a flight with a fake boarding pass and without a photo ID.

"He proved this entire system wrong, in a way," Roy said. "It's sort of the same thing."

Perhaps more surprisingly, the shelter business is booming yet again. Modern "shelter community timeshares" such as Vivos and manufacturers like Radius Engineering report increased interest in shelters since Sept. 11. In a piece from USA Today, Radius said they've doubled their shelter production every year for the past five years.

"Vivos claims its shelters will provide protection against nuclear war, bio war, terrorism, killer comets, a global tsunami, a super volcano and a collision with 'Planet X,'" Roy said. "Which, according to one scenario, will crash into the earth next year."