Those were just two of the juicier revelations that emerged as the actress and filmmaker, two of Hollywood's most unabashed liberals, chatted with audience members and one another in a 75-minute conversation sponsored by the Tribeca Film Festival.

After an audience member asked the pair if they believed they were "under surveillance," Sarandon said she didn't just believe it, she knew it. "I've had my phone tapped ... I've gotten my file twice under the Freedom of Information Act," she said, before mentioning the security clearance snafu. She said she had no idea why the clearance was denied, and jokingly asked the questioner if he knew the reason. (The Huffington Post has reached out to the White House for comment.)

Moore, responding to a separate question, said he had been the target of a "disinformation campaign," possibly engineered by the federal government. "I was told this by some people in the Bush administration. They went bonkers when 'Fahrenheit' came out and thought it would throw the election to Kerry," he said, referring to his 2004 documentary "Fahrenheit 9/11," which came out five months before the election that pitted sitting president George W. Bush against Senator John Kerry. "The reason I'm a poster boy on Fox News and Rush Limbaugh is because my films reach a large group of people in the middle, not just on the left."

Moore's scalding remarks about "Waiting for Superman" came in response to still another questioner, who asked whether he planned to "follow in the footsteps" of Guggenheim. "Well, I wouldn't follow in those footsteps, because I hated that film," Moore said. "The point I was left with with 'Waiting for Superman' was that teachers and their unions are the problem, and they are not the problem." (Moore declined to say what subject he would tackle in his next film.)

Moore dismissed the notion -- timidly raised by one audience member -- that he should appear less in his own films, but noted that there is a sign in his editing room that reads, WHEN IN DOUBT, CUT ME OUT. He added that it has become more difficult in recent years for him to persuade subjects to let him interview them. "I wish they wouldn't be afraid of me," he said. "I'm a really nice person. I'm not violent. I'm an Eagle Scout."

Noting that she and Moore are both introverts -- a fact Moore rightly acknowledged is hard to believe -- Sarandon asked the famously pushy filmmaker how he gets up the nerve to barge in on powerful subjects and chase them around for interviews. "I am terrified," Moore said. "I've always been terrified, and I'm trying to hide it as best I can, trying to convince myself that I'm going to get through it alive and that no harm will come to me."

Describing the aftermath of his famous confrontation with actor and NRA president Charlton Heston -- which formed the climax of Moore's 2002 anti-gun film, "Bowling for Columbine" -- the director said he and his team were momentarily trapped inside Heston's property, separated from their vehicle by a 14-foot automatic gate. Reasoning that Heston had called "someone from the NRA" whose goal would be to confiscate their footage, Moore instructed his team to toss the film over the gate to an assistant. "And once they saw that all the film had been heaved over the gates, they opened the gates," Moore recalled, adding that his cameraman felt so sad about the encounter that he cried in the car. "We all loved Charlton Heston," he explained. "We grew up with him."

Several audience members asked questions about the changing distribution landscape -- a hot topic at any film festival in these days of digital transformation. Moore, whose first film, "Roger & Me," was picked up by Warner Bros. after its debut at the New York Film Festival, repeatedly returned to what is clearly a core theme for him: "The only thing you should be worried about is making a great movie," not what technology you will use to distribute it.

"Stay true to the fact that you have chosen cinema. Too many documentaries -- the people making them should be running for office," he said. "If you make something that people want to see as a movie, in theaters, you will find distribution."

At times, the event had the cheerfully combative feel of an old-time labor rally, and toward the end Sarandon asked Moore to give the audience some concrete advice on how to make the world a better place. After hemming and hawing for a moment or two, Moore warmed to the topic: "First of all, be part of Occupy Wall Street," he said, before urging those in attendance to run for office and "get involved with any organization that is working to get money out of politics."

One audience member admitted that she had come to the event not liking Moore. "I was feeling the same way about myself," he replied, in a charming display of self-deprecation. "I've got this gnarly hoodie on. What am I doing here?" The audience member went on to say that she had been working in the World Trade Center on 9/11, and that she had avoided "Fahrenheit 9/11" because she "wanted revenge" for the attacks. Only later had she come around to the view that they had been exploited by politicians. Moore said he understood her anger, but noted that "this sense of revenge that took over, it didn't do us well."

"It's been a difficult decade," he added. Which is one thing we can all probably agree on.

Snapshots From This Year's Festival: 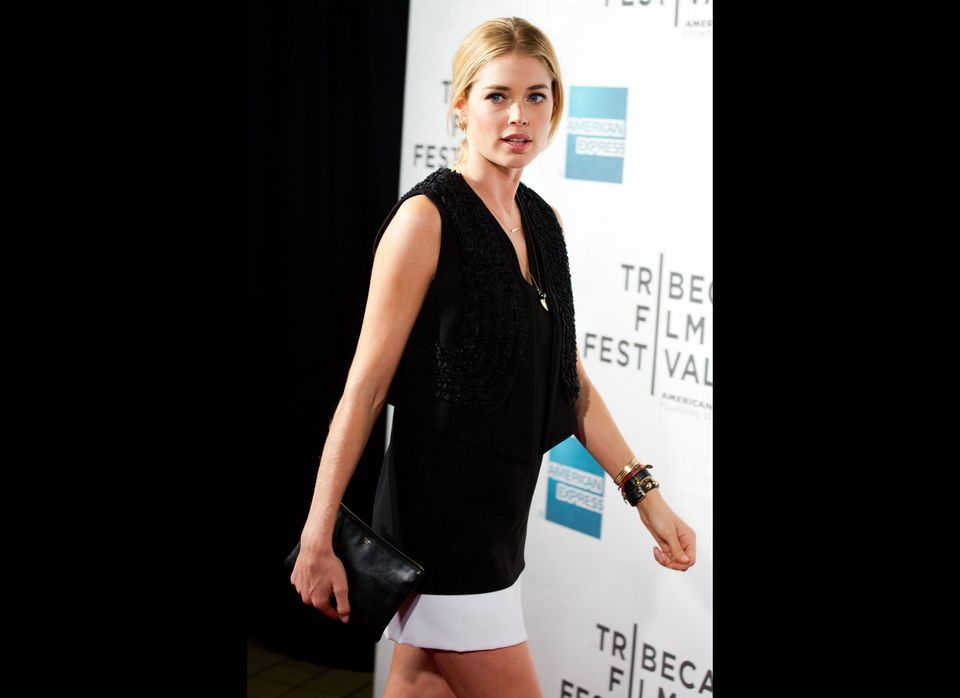