Susan Tepper has been a writer for twenty years and dear Petrov (Pure Slush Books, 2016) is her sixth book. An award-winning author, Tepper's stories, poems, interviews and essays have been published worldwide. Her column 'Let's Talk' runs monthly at Black Heart magazine. She is the founder and host of FIZZ, a reading series at KGB Bar, NYC, sporadically ongoing these past eight years. She lives in the New York area with her husband and her dog, Otis. Discover more of her work at her website. 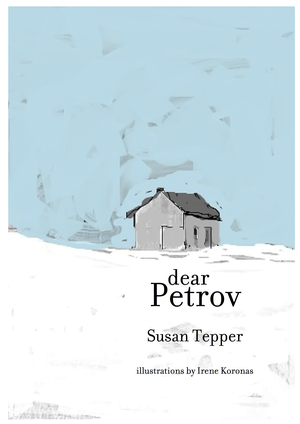 Loren Kleinman (LK): Who is Petrov?

Susan Tepper (ST): Petrov, in strict literary terms, is a career soldier in Russia circa late 19th Century. However, as many reviewers have suggested, Petrov could be a lot of other things. Perhaps he is an idealization in the mind of my desperately lonely female protagonist living out her life in a most solitary fashion in rural Russia. Or, maybe Petrov doesn't exist at all in literary corporeal form. That has also been bandied about. Whatever he is, or isn't, he has a profound influence on the story.

LK: Can you talk about how you chose the cover art? How is it important to the book's foundation?

ST: Irene Koronas painted this picture which I stumbled upon accidentally. I'm a great fan of her artwork. She was poetry editor at the Wilderness House Literary Review during the same period that I was the fiction editor. So I've known Irene for some time. The moment I saw this little hut-house in the midst of all the snow, looking so solitary and forlorn, I knew I had to have it for my book cover. Irene graciously handed it over to me, and she also did the line drawings inside the book which illustrate the stories with a delicate touch.

LK: Can you talk about the intersection between flash and poetry?

ST: Actually I never thought of it in those terms but there is an intersection going on in certain instances. Some flash will always present as pure fiction while other pieces have those surreal elements that label them poetry. As for dear Petrov many of the previously published pieces came out in fiction magazines, while other editors took them as prose poems. It's kind of a cross-breed, I suppose. It wasn't my intention to write them as any specific genre. I jumped into the protagonist and she did all the deciding.

LK: How is dear Petrov like or unlike your other books?

ST: Loren, my books run the gamut. I have written the traditional long novels, which I enjoyed doing very much at the time. I love getting into a long narrative flow and living with the characters as they go through their trials and tribulations. Since I did a lot of acting from an early age, I believe the diversity of roles has turned me into a diverse writer. My book 'From the Umberplatzen' is structured somewhat like dear Petrov. Again it is a female protagonist, but in that earlier book it is a 're-telling' of a love affair from the past, and the male character does speak quite a lot and very effectively. What makes these books similar is the structure. In From the Umberplatzen I also used short pieces that connect into a much larger story, as is the case with dear Petrov. It's a lot of small moments that shape a life. And, in this case, the book. It's not a planned out thing. I sit down to write and the form comes on its own. Writing and life are really so beyond our control.

LK: Can you tell us what you're up to next?

ST: I'm currently revising a novel written from two points of view: the wife's and the husband's. They are not together when the story begins. It's a full-length novel where the voices alternate chapter by chapter. What makes this captivating to me, is that it confirms that notion of men and women operating from different planets (the Venus/Mars thing). I believe that. I am a long-time feminist, but I've had a few husbands and frankly I still don't really understand men. It's been said that we writers set out to solve riddles when we create a work. All my work is aimed towards that direction. In all my books there is that 'disconnect' between the sexes. It can be confounding yet exhilarating. I guess it's what keeps the species going. As Don Quixote sang so eloquently in Man of LaMancha: "To dream the impossible dream..."