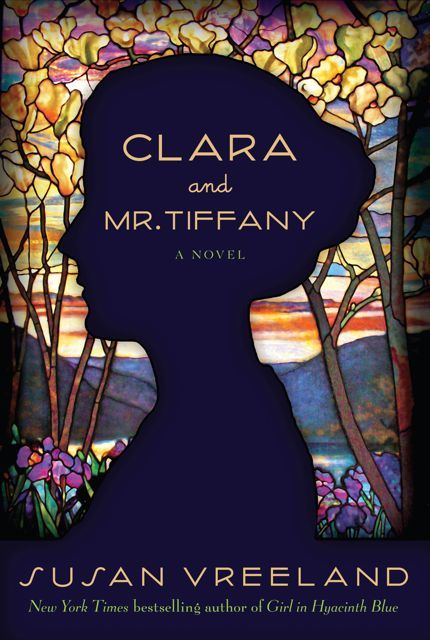 Historical novelist Susan Vreeland has a particular focus: art and artists. Creating art, encountering art, being changed by art -- these are her subjects.

Her new novel, Clara and Mr. Tiffany, is about Clara Wolcott Driscoll, who must have been extraordinary. As a young widow, she entered the male workforce in 1890s New York City. She oversaw the growth and management of a department of female artists within Tiffany Studios. She designed some of Tiffany's most iconic and beautiful lamps.

Clara Driscoll's employment at Tiffany, from 1892 to 1908/9, also coincided with tremendous growth and change in New York City.

In the following interview, Ms Vreeland talks about Clara and Mr. Tiffany, her ground rules for writing historical fiction, and why she loves her work.

Why do you write about art?

There are multiple reasons for my attraction to art-related fiction, which is academically called ekphrasis. It is my way to participate in the art world and in the world of the eyes as well. I write about art out of gratitude to painters for the joy and spiritual uplift they have given me. Painters interpret for us the visual glories of God, and in this way, bring us closer to Him.

In a broader, less personal sense, I use pieces of art as metaphors for their effect on the imagination. Thanks to art, instead of seeing only one world and one time period, we see the world multiplied into many times and places which offer windows to other lives.

Each time we enter imaginatively into the life of another, it is a small step upwards in the elevation of mankind. When there is no imagination of others' lives, there is no human connection. Where there is no human connection, there is no compassion. Without compassion, then community, commitment, loving-kindness, human understanding, and peace all shrivel. Individuals become isolated, the isolated turn cruel, and the tragic hovers in the forms of domestic and civil violence. Art and literature are antidotes to that.

As an historical novelist, what are your ground rules for writing about real people?

Archival and published history does not always record personal relationships of historical figures, so characters must be invented to allow the subject to reveal their interior realm through intimate interaction. When a story involves peripheral people but research reveals nothing about the real individuals who filled those roles, the fiction writer can invent in ways that contribute to the themes. Such minor characters can have stories of their own which can parallel or contrast with the major characters' concerns. These ancillary stories give breadth to a novel which a biography doesn't offer, thus giving a broader window on the time period.

Historical fiction writers face criticism if they change known history (i.e., reversing the outcome of a war); if they drastically change the character of a historical figure; if they have anachronisms in details, setting, or language; or if they make mistakes in chronology. I strongly feel that stories which might require a significant departure from known human history, or that distort truth gratuitously, are to be avoided.

In turn, readers of historical fiction must accept that an historical person usually takes on a stronger, more sharply delineated personality than what is revealed in histories.

While you were doing research, was there ever an Aha! moment when you thought, "I know Clara Driscoll now"?

One such moment occurred in a scene with Tiffany in his garden at The Briars, and Clara pleads silently, "When you look at me, don't you see more than a design machine? Don't you see a woman with more than one passion? Don't you see my adoration for you? Don't you recognize the longing heart within the glass I've touched?" Here her yearning spills out in truth.

A big, breathy Aha! came from my lips when I found I had written a scene that defined the interaction between Tiffany and Clara and the beautiful collaboration that resulted in art works prized today. It is the end of the scene in which she first proposes leaded glass lampshades and mosaic bases:

"Brilliant. Brilliant!.." He shifted his gaze to me, placed his hands on his knees and leaned toward me. "Do you realize what a huge step forward this is?"

We were two artists connected by an idea, and he knew it as well as I.

This moment was the launch of her career, the elevation of her status in the company, and the intoxication of her vision of her future.

Did your dreams get more colorful as you became immersed in Clara's beautiful, colorful world of design?

Color has always been important to me, ever since my first deluxe box of Crayolas. What variety! What astonishment! Even in 1998 when I came out of one hundred days of protective medical confinement, I took my first walk around the neighborhood and saw my neighbor's impatiens in a deep rich magenta. What a God! I thought, to have created such a color. My deep appreciation for color was one element in Clara's personality with which I identified.

I like it that Clara Driscoll's whole life did not revolve around art. She enjoyed people and knew how to get on in the world. Do you agree with that assessment of her character?

I do. She was intensely curious, and wanted to suck out all the vibrancy of New York--its crowds, tall buildings, its progress toward modernity, its sweep of events, its grand operas as well as its tiny human dramas taking place in the Lower East Side.

Clara tells herself and her "girls" that it doesn't matter that they work anonymously. Do you think she really felt that way?

Her letters reveal a yearning for recognition, and a poorly concealed despair when she didn't receive it. Knowing that her girls were never going to get any individual recognition, my Clara was prompted to turn their sights to the satisfaction of creating beauty.

You wrote that "entering the mind and heart of painters has taught me to see, and to be more appreciative of the beauties of the visible world." What did Clara Driscoll teach you about beauty?

She, or rather the act of rendering her story, taught me that there are more types of beauty than just the sensual beauties. There is the beauty of instinctive acts of generosity and caring, as evidenced by Edwin leaping off the streetcar to tell the Russian woman of the job he found for her son. There is the beauty of Clara's compassion for Julia and Olga, who would both lead limited, hard-scrabble lives. There is the beauty of tolerance and accepting people for what they are, without judgment, as evidenced in her friendships with four gay men. In the last analysis, these beauties may be more profoundly important than the beauties of the visible world.

Why do you think Tiffany would not allow married women to work in his studio?

He was enough of an egoist to want total dedication of his employees. Married women would eventually have children, and then divided loyalties would result. By the way, other employers in the 19th and 20th centuries had similar policies. This began to change, however, during World War II when women were needed in munitions plants, and Rosie the Riveter became the symbolic heroine of working women.

Yes, it really did happen.

Do you think Clara's large-spirited "I choose all" approach to life made her a greater artist?

Not necessarily. It made her a greater person.