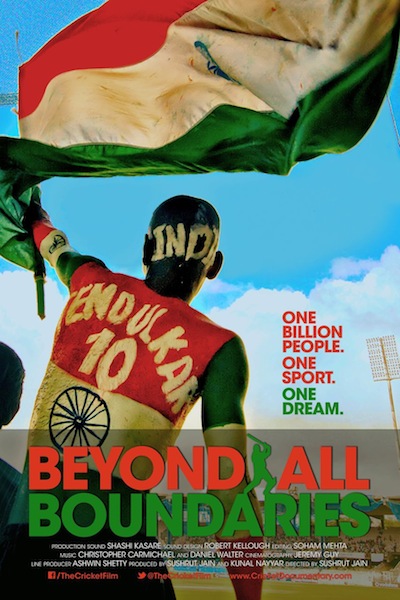 Cricket is one of those sports that needs a mathematical mind, the patience of Job and Thor's stamina to sit through. Test matches can last up to five days and a series consists of three to five matches. Again, this is where a math genius would come in handy.

I first experienced the sport in Ahmedabad, Gujarat, at the maternal home of a famous Bollywood director. He insisted I keep him company during an India vs Pakistan match, watching it on a small black and white TV, with spicy Gujarati snacks and even better chai being served in abundance. Needless to say, my love for the sport was born. Even if I have yet to understand it.

Sushrut Jain's feature documentary Beyond All Boundaries goes beyond the sport and explores the magical power of cricket -- which is able to unify an entire country of more than 1.2 billion people otherwise so easily divided by religion, caste, language and politics. Narrated by the Big Bang Theory's Kunal Nayyar, it's a film that shows the humanity behind the sport, through three personal stories: Sudhir, the painted man who follows all matches by riding hundreds of miles to them on his bicycle, Akshaya, the girl who plays against all odds, lives in a chawl and comes from an abusive family background and Prithvi, a twelve-year-old super talented player who is his unemployed father's every hope and whose mother died when he was just three.

And through his film, Jain manages to enlighten us on a world that may be distances away from ours, yet seems so humanly close.

I caught up with the talented filmmaker before his film goes on to screen in the Mumbai Film Festival on October 20th.

When did you know this had to be your film project? 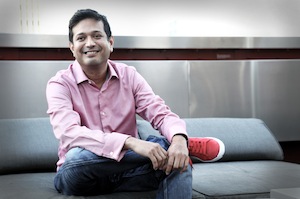 Sushrut Jain: Like most kids growing up in Mumbai, I was obsessed with cricket as a child, playing nearly every day and watching all the India games on TV. I came to the US, studied economics in graduate school at Stanford and started working in the corporate world. Cricket became, for me -- as it is for many Indian transplants here -- a way to stay connected to India. My other obsession since childhood was storytelling and film. I dreamt of making films someday that would capture the India I knew as a child -- richly textured, filled with dramatic stories of everyday people. Eventually, I quit my corporate job and went to graduate school in filmmaking at the University of Southern California.

As the 2011 World Cup of Cricket approached, I started to think about the passion, some may say madness, for cricket in India and how it could potentially make for a great documentary. I told a friend about the idea and he replied that if I didn't make this film, it wouldn't get made, not the way I saw it. That probably was what I needed to hear before I could embark on what turned out to be a massive project. I raised funds from friends and family and landed in India with little more than an idea. There I hired a mostly Indian crew and set about making the film.

Three main stories take centerstage in your film. Did you begin knowing Sudhir, Akshaya and Prithvi would be the main protagonists?

SJ: I had heard stories of cricket superfans, including an old woman in Chennai who prayed to an idol of cricket superstar, Sachin Tendulkar. But in my research I came across a small mention of Sudhir Kumar, a 30-year old man who for the past ten years had cycled across India to attend cricket matches, his face and body painted in the Indian tricolor. I thought, if we could find this guy and if he was the real deal, not some self-promoter, then we would have a movie. We did a nationwide search for Sudhir but it was not easy to find a man with no address. So we decided just to wait for a World Cup match and see if he'd show up. Sure enough he was there, waving his giant India flag, and fully painted. I asked him if I could make a movie about him, he said "Sure," and that was the beginning of a beautiful friendship. He turned out to be a real believer, a cricket monk.

As for the younger characters, we spent weeks going to different cricket grounds all over Mumbai, speaking to kids, coaches, parents, until we found the two amazing stories of Akshaya and Prithvi. We chose them not just because their stories were inspiring but also because they were a lot of fun to be around.

They say baseball is as American as apple pie. And cricket is intrinsic to India. Do you think we find within these sports the souls of our countries?

SJ: As a cricket-loving Indian, there's nothing more beautiful to me than a bunch of kids planting stumps on the beach and playing some pickup cricket as the sun sets over the Arabian Sea. If you want to see the soul of a nation, I can't think of a better place to find it, for better or worse.

Cricket in India is unlike any sport in the Western world. The simple reason is that while the average American has football, basketball, baseball, and a variety of less popular sports to choose from, the Indian sports fan still basically has only cricket. While other sports exist in India, none comes close to cricket in terms of viewership, money, and facilities. Another thing that makes cricket dear to Indians is that the cricket teams perform well at the highest levels of international competition. For a country of over one billion, we bag less than a handful of medals at the Olympics. People like to see their heroes win and that makes cricket a rallying point.

The reason cricket thrives in India, while other sports do not, has a lot to with the colonial legacy. There's something about the sport's etiquette and gentlemanly spirit that the English liked to tout as their traits, and that suggested the existence of civilization and sophistication. In some ways, it's twisted that the colonized people strived to achieve the colonizer's idea of civilization, but the beautiful irony of cricket today is that it is no longer an English sport. India is firmly now the center of the cricket world both in terms of money and competitiveness, and the English and others now come to India to play for big bucks.

How, and when did Kunal Nayyar come on board?

SJ: During editing, I reached out to actors that I knew in Los Angeles looking for a good Indian voice to do the narration and someone got the film's trailer in front of Kunal. He loved the trailer and when I showed him and his wife the cut of the film, he decided he would do more than just narration -- that he would come on board as a co-producer and get me over the finish line. He's been an incredible positive force for the film.

What have been some of your cinematic inspirations?

SJ: Without a doubt, at the top it's Satyajit Ray. It's my dream to portray India with the honesty and poetry that he once did. I love the old classics -- Fellini, Bergman, Truffaut - - and filmmakers from around the world -- Almodovar, Salles, Kiezslowski, Haneke. There are too many. I've watched and loved every Woody Allen film. But it's not all highbrow with me by any means: I enjoy kicking back to a good Will Ferrell or Judd Apatow comedy as well.

Beyond All Boundaries will also screen in San Francisco on November 9th.

Images courtesy of Beyond All Boundaries, used with permission