Artist Susie MacMurray consorts with the dangerous quality of beauty, that threatening edge between the sublime and the sinister. MacMurray, who is currently exhibiting in her first solo show in New York and inaugurating the new ground floor space of the renamed, Danese Corey Gallery, was once a classical musician. She played the bassoon before she abandoned the confinements of performing someone else's tune to compose her own visual creations, but the skills and practice garnered in the concert hall arena still underscore her work. MacMurray understands exactly how, and exactly where, the tension between disparate components can be brought together to form an unexpected harmony.

"Put together two things that weren't together before," fellow Brit, Julian Barnes writes, "And the world is changed." Witness the gracefully absurd sculpture, "A Mixture of Frailties," a piece MacMurray constructed out of a tailor's dummy which she then clad in a dove-white gown that resembles an haute couture wedding dress, but is on closer inspection, made from 1400 household rubber gloves that have been stitched together. The gloves MacMurray turned inside out to reveal their downy insides -- their vulnerable underbellies. Subversive and yet ordinary, this resplendent frock has the corporeality of flesh. A surreal concoction of disparate conditions: Domestic cleaning gloves and high fashion, that brought together, creates a third entity. Something absurd and newly wonderful, like a bloom on a cactus. 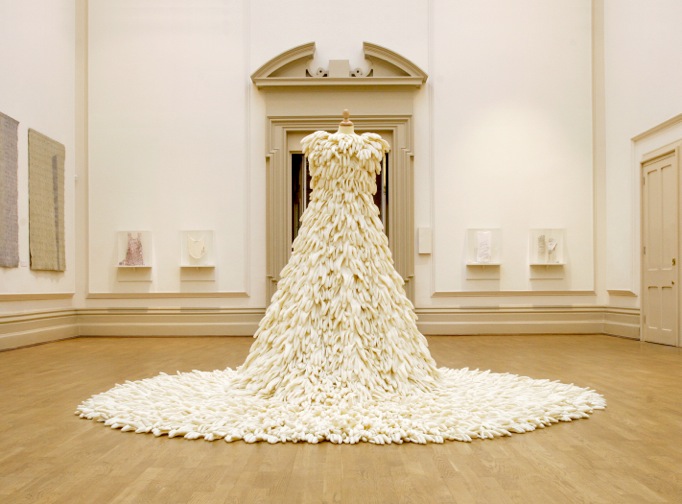 MacMurray herself is a confluence of the improbable. At 54, she's only five years out of art school: a middle-aged woman artist fast-tracking it through the art world exhibiting widely in galleries and museums. She's undertaken a number of large site-specific installations in historic locations in the United Kingdom and Europe. "Echo," was an installation done in 2006 that was situated in a Medieval church in the City of York. In "Echo," MacMurray festooned the church with a hanging gossamer cloud of 10,000 hairnets each enclosing a piece of violin bow-hair. "Promenade" created in Kedleston Hall, Derbyshire in 2010, where MacMurray wove 105 miles of gold thread through the central Marble Hall, a streaming web of gilded lines -- musical strings -- that alternately ensnared and refracted light.

MacMurray's site-specific work is palpably transitory and often made of the ephemera of feathers, hair and shells. These pieces are short-lived narrative responses to memory, location and history. And while the new series of sculptures MacMurray has constructed for the Danese Corey show are a response to more personal history and the site of her own life, they are also objects that are caught between stages of transmutation. Catching, hooking, snaring: these are ideas MacMurray plays with in materials as varied as hairnets, fishhooks, tape, bandages and chains which in turn, grasp, birth and molt into waxy and cottony, ballooning substances.

Indeed the half aluminum chain, half wax creature that is titled, "Eve," resembles some sort of new hybrid, vertebrate beast. MacMurray loves to explore paradox in her materials. In, "Eve," she has fashioned the soft substance of wax into tough pointed prongs, which seem to be growing out of a hard yet sensuously curved cord of metal. 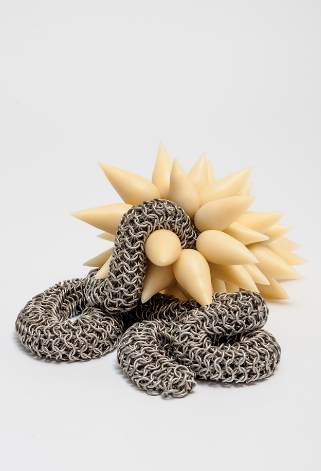 Occasionally mentioned in the context of the Arte Povera movement for her use of "poor" and "simple" materials, MacMurray is rather an alchemist reinvesting these "poor" and "disenfranchised" materials with power. Take, "Siren." A song and a mythological female creature tempting sailors to their death, "Siren," could be the daughter of, "Eve." MacMurray's, "Siren," is made from fishermen's treble hooks, thread and wire. It is a pod shaped entity with a snake-like body and a deadly, ensnaring tail. She is an alien, as supple as she is fatal. Beauty in MacMurray's world is dangerous and powerful, and you only have to remember Helen of Troy and how beauty ruined a legendary city, or look at the chadors women in Muslim cultures cover themselves with today, to know how uncomfortable, how threatening, beauty is to behold. 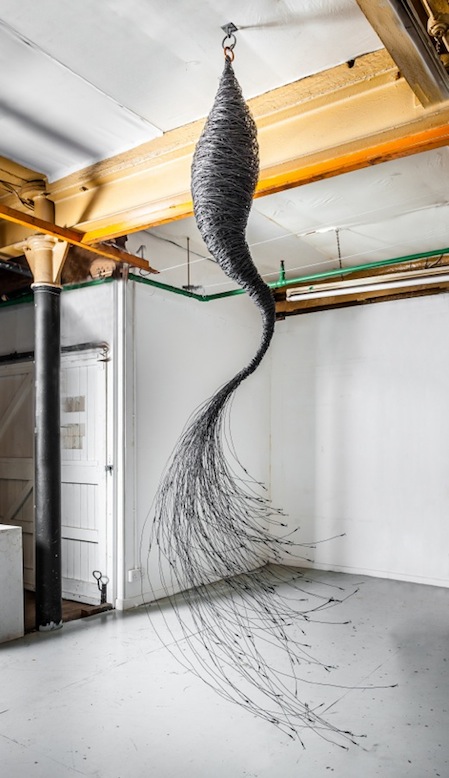 But beauty is also the strange and yet finally, the perfect arrangement of imperfect parts into a euphonic whole. One wall of the gallery space is devoted to a piece that is titled: "Siblings." Identical large droplets of hardened wax balance on the ends of ley-pins. These are thin, straight pins that were used in knitting factories to spread the yarn. In "Siblings," MacMurray has refashioned these long wires with their wax condensations, to resemble musical notes in a composition. Dancing across the wall, they produce a rhythmic design, a configuration of form and its shadow. "Siblings" are of course related and it is this idea of the relationship and interdependence -- of part to whole, tender to hard, frail to solid, luxurious to cheap, exposed to hidden and finally, of power to submission that creates the tryst necessary for harmony, for in the end, beauty to transpire. 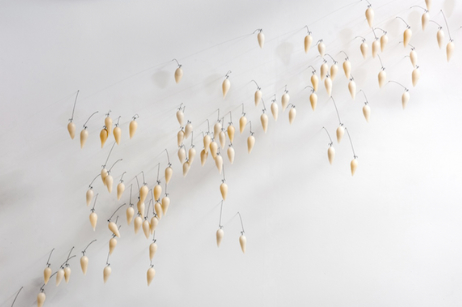 All images courtesy the artist and Danese Corey.

Photo Credit for "Siren," "Eve," and "Siblings," is Ben Blackall.