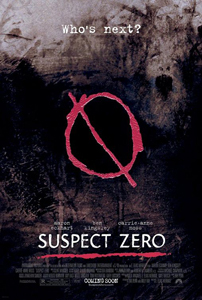 Mostly hated by critics, and definitely underappreciated by audiences, this little shocker failed to impress for a number of reasons. For one thing, it tracks two serial killers, one of whom is actually a good guy. For another, it crosses genres (at least in the minds of some) by combining a police procedural with a study of remote viewing.

The pic opens on a discarded doll and a milk carton, featuring a photo of a missing child, along with a fleeting image of an 18-wheeler passing by. The scene shifts to a diner, as Benjamin O’Ryan (Ben Kingsley) starts to harass Harold Speck (Kevin Chamberlain), another patron. O’Ryan sits across from him, and starts showing him pictures, none of which we can see clearly, but we surely can get Speck’s reaction, and he’s extremely uncomfortable.

In fact, he leaves the diner, and it’s only after a few seconds that he notices O’Ryan in the back seat of his car, now moving down the highway. Some time later, Speck is found dead in his car, precisely straddling the New Mexico/Arizona state line (to trigger FBI response). His eyelids have been removed.

In charge of the case is our protag, disgraced FBI Agent Thomas Mackelway (Aaron Eckhardt). Mackelway was once a rising star in the Bureau, but violated the rights of vicious rapist/killer Ray Starkey, who went free because of his blunders. As such, he has been reassigned from Dallas to Albuquerque. Mackelway seems to suffer headaches, and gets visions, although at this point, we’re not exactly sure of the details.

Complicating matters further is that agent Fran Kulok (Carrie-Anne Moss), an old flame of his, has been brought in to assist with the investigation. Meanwhile, Mackelway has been receiving faxes and packages of information, relating to various unsolved homicides, along with strange, lurid drawings, all accompanied by a symbol resembling a circle with a line drawn through it.

After some effort, the FBI agents locate the car used by O’Ryan, who, of course, killed Speck. They are surprised to discover a body in the trunk, belonging to one Barney Fulcher, whose eyelids have also been removed. Before long, another lidless vic appears, who turns out to be freed killer Ray Starkey. Written in the condensation on Starkey’s car window is “You’re Welcome, Tom.” What’s more, Speck and Fulcher are found to be sexual predators and killers.

We now see that O’Ryan is killing serial killers in an attempt to attract Mackelway’s attention, but to what end? O’Ryan, formerly with a secret FBI task force that used remote viewing to solve crimes, is on the trail of what he calls “Suspect Zero,” a super-criminal responsible for hundreds of abductions and homicides, who eludes capture by not following any sort of discernible pattern. Remote viewing is a form of ESP, whereby the viewer can visualize the crimes as they are occurring, and are not spared any of the gruesome details. Expert viewers can even see the future, on occasion.

Remote viewing, then, is the source of O’Ryan’s drawings, as well as his contention that Suspect Zero is a long-haul trucker, who grabs kids, and puts them in the refrigerated compartment of his truck, before killing, torturing, and burying most of them on an isolated farm. O’Ryan has chosen Mackelway to assist him in capturing Zero, since he knows that Mackelway can also remote view, even if he won’t admit it to himself. Indeed, remote viewing is the cause of his headaches and visions.

Eventually, O’Ryan abducts Mackelway, forcing him to help in his quest for Zero. They’ll find Suspect Zero, all right, but there will be Hell to pay.

At the beginning of this piece, I mentioned two reasons why the movie failed at the box office, and with critics. Another reason is that officially, the FBI denies that a Suspect Zero can even exist, although there have been many high-count serial killers, including the infamous Green River Killer. At the core of this denial is the bureau’s over-reliance on criminal profiling, the practice of which reached new lows some years ago when a retired profiler was called as an expert witness in an appeal proceedings.

Despite mountains of evidence used in the original conviction, the profiler insisted that the offender did not “fit the profile,” and therefore was certainly innocent. Moreover, the existence of Suspect Zeroes would lay out in sharp relief the quite sad deterioration of the Bureau, now riddled with PC, as well as a litany of unsolved cases. Perhaps more embarrassing are cases that would have gone unsolved but for the unwanted help of Others, including the capture of FBI agent/Soviet spy Robert Hanssen.

Here again, the very notion of an agent/spy was denied for years, until the Ruskies themselves gave up key evidence.

As to remote viewing, several reviews of the film erroneously referred to it as the “discredited practice” of remote viewing. Nothing could be further from the truth. Although the FBI and military remote viewing units were officially disbanded, lack of success was not the reason. Rather, the experiences were so intense for the viewers that none of them could keep doing it for more than a couple of years. This very point is emphasized in the movie.

If you seek offbeat and thought-provoking entertainment, Suspect Zero fits the bill.