"It's about more than coffee," John Sweeney says. And he means it.

For the last year, the 29-year-old father of four has worked from his home in Cork, Ireland, on an international movement called "Suspended Coffees" -- where cafes around the world let their customers know they can buy an extra cup of coffee and "suspend it" for someone in need.

"A cup of coffee can touch someone's heart," Sweeney told The Huffington Post. "It's such a simple act of giving." 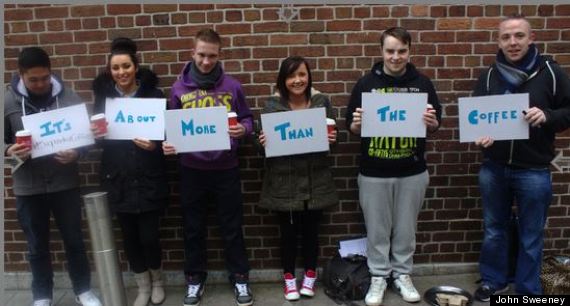 Of course, his concept is not new. Buying a stranger a cup of coffee and then paying it forward has made headlines before. But Sweeney's official branding of the act of kindness has helped stores better promote the generosity. And the movement, he says, is not aimed at only helping people visibly in need.

"When you pass by someone, you don't know their situation," Sweeney said. "It may be a homeless person or a business man battling personal issues or a single mom having a rough day, but you don't know their story. Maybe a cup of coffee is all they need to find a little bit of hope that day."

On Sweeney's Suspended Coffees Facebook page and website, cafes from all over have officially signed up to join the movement, meaning they place a sticker or sign in their windows or on their counters to let customers know what suspending a coffee means. And you don't need to specify who gets your free cup of coffee -- you can simply suspend one and later on, someone who needs it can come in and ask for it.

"It's just the gesture that people are taken with," Hope Percy, retail manager at participating bakery, Atlantic Baking Company, in Rockland, Maine, told HuffPost. "Because the world is fast-paced, and people aren't very trusting, I'm so happy that our customers are interested in helping their community or even the person living right next to them."

"We've had homeless people come in our store just to get out of the cold," Eric Neat, owner of Roasters Coffee Cafe in Cedar Park, Texas, said. "Then they become aware of the program and realize they can also have a warm cup of coffee."

In exactly a year, the movement's Facebook page has reached more than 250,000 followers, and nearly 1,000 shops from 24 countries have officially signed up. Sweeney says he and volunteers are now working to make it an official nonprofit this year.

When he thinks about why he bothers doing any of this, he recalls a time when his kids were asking for ice cream in a shop, and he couldn't afford it.

"The manager said, 'Don't worry about it,' and paid for the ice cream," Sweeney said. "It turned my whole day around. That's what it's all about. Turning someone's day around."