Because everything unraveled so quickly, no one scrutinized Standard & Poor's flip-flop on AIG. On Friday, September 12, 2008, S&P said it would, "continue discussions with the company over the coming weeks regarding liquidity and capital plans. Once we have more clarity on these issues, we could affirm the current ratings on the holding company and operating companies or lower them by one to three notches."

Of course, that never happened. S&P did not wait, and issued a downgrade the following Monday. It had at least one conversation with AIG that day, when only two things were clear: Nothing at AIG was settled, and the contagion effect from the Lehman Brothers bankruptcy was huge. The discussions could not have been especially detailed, since AIG's financial staff was preoccupied in its negotiations with Hank Paulson's deputy, Dan Jester, Goldman and JPMorgan Chase, who ostensibly were trying to put together a bank deal that would address S&P's concerns.

For S&P, the only way to find clarity at AIG was to peer into its own reflection. AIG's liquidity was dependent on its credit ratings, or more specifically, ratings triggers. And AIG's biggest problem - its unsettled disputes over the valuation of $62 billion worth of CDOs - was traceable to the reliance on AAA credit ratings of those CDOs.

For a financial company like AIG, liquidity is like oxygen; it can't live very long without it. To take the analogy a bit further, solvency is more like food; you'll die without it, but your lack of nourishment won't be apparent for a while. Around 6:40 p.m. on September 15, 2008, Fitch announced its downgrade of AIG, and few hours later

S&P and Moody's followed suit. Whether or not the rating agencies acted independently, or in good faith, is an open question. But there is no doubt that they all knew the consequences of their actions. The rating agencies cut off part of AIG's oxygen supply.

More specifically, AIG's unregulated subsidiary, AIG Financial Products, which operated under the financial guaranty of its parent, had hundreds of billions of dollars of trading positions in all sorts of derivatives. AIGFP's obligation to post cash margin on those trading positions was based on its credit ratings. The lower the credit ratings, the more cash margin required. As of September 12, 2008, if AIG were downgraded one notch by one credit agency, its expected liquidity drain would have been about $10.5 billion; if it were downgraded one notch by two agencies, the damage would have been $13.3 billion. During the evening of September 15, 2008, S&P downgraded AIG three notches, from AA- to A-, and downgraded it's short-term rating from A-1 to A-2. Those downgrades, plus the downgrades at Moody's and Fitch, precipitated a $32 billion liquidity drain by month-end.

On September 16, 2008, when the government hurriedly put together a bailout package for AIG, everyone was focused on AIG's immediate liquidity needs. Certain ratings triggers, with 30-day lead times, were not given top priority. Those triggers had been tripped by downgrades from S&P, and not by those at Moody's. But 18 days later, after AIG had become a ward of the state, Moody's decided that it too would start the 30-day countdown on the ratings triggers of some other CDOs. On October 3, 2008, Moody's downgraded AIG from A2 to A3.

The timing these embedded rating triggers were part of the backdrop of Thomas Baxter's testimony for the House Oversight Committee on January 27, 2010. Baxter, the general counsel for the New York Fed, was part of the team that oversaw negotiations with banks holding credit default swaps on $62.1 billion worth of CDOs that the government purchased at par. Baxter gave some of the most important testimony of that day's hearings:

First of all, there was a critical deadline, Congressman, of November 10th. And that was the day that AIG was going to announce a $25 billion loss in its 10-Q for the third quarter. So we were looking at that.

And we were being told by the credit rating agencies that unless something happened with respect to the credit default swaps, on or before November 10th, that there was a strong probability of a downgrade.

Now, a downgrade would have been catastrophic. It would have brought us back to where we were in September, on the brink of an AIG bankruptcy.

So from those of us who were working on -- at the New York Fed, we looked at that as a hard deadline. And the execution risk of failing to get the credit default swaps torn up by that date was -- was -- it would put us back on the brink of bankruptcy.

So that was -- that was the risk of deal failure. That was the execution risk. So we had to get the deal done.

AIG had been unable, as Mr. [Elias] Habayeb [AIGFP's CFO when a lot of those toxic assets were booked] has testified, to get that -- those credit default swaps torn up.

On November 6th, Congressman, we got formal authorization from Stasia Kelly, who was then AIG's general counsel, to take over and see whether we could get those credit default swaps terminated by deadline.

So we were operating against the clock to do that.

Our choices were, should we push for concessions and try to use whatever leverage we had to get those concessions, or should we simply go to par, which would apply to every counterparty -- and the way par works is you offset the collateral that these counterparties had been pulling out of AIG against you offset that collateral against the par price of the bonds.

Moody's announcement, contemporaneous with the November 10 deadline, backs up Baxter's testimony. AIG's A3 rating, which had been under review for possible downgrade, was affirmed, following the government-supported restructuring plan, which included "de-risking" the CDO exposures.

The dates are critical. The New York Fed was first authorized to negotiate on behalf of AIG on November 6th, 2008, which was a Thursday. And the New York Fed believed that the absolute deadline for setting everything with 14 different banks was the following Monday, when AIG was required to file its 10-Q with the SEC. That might have been possible if the banks were motivated to cooperate. But, as The New York Times reported, one of the largest CDO counterparties, Goldman Sachs, "did not own the underlying bonds. As a result, Goldman had little incentive to compromise."

If people have little incentive to compromise, they don't make themselves available over a four-day holiday weekend. It's a safe bet that most senior bankers and bank regulators in France took that Monday, November 10, as a vacation day to segue into Armistice Day. The same was true for a lot of bankers in the U.S., where Veterans Day is a bank holiday.

There's another reason why a banker would be disinclined make himself available over the weekend. He would need to assemble a group of very a senior executives in order to say, "I need an emergency approval to agree to something that will force us to write off billions of dollars on a deal that's been the subject of contentious negotiations for the past fifteen months. And the reason why I need an answer right away is because..." If you convene such a meeting, you need to be prepared for tough questions, which may include, "Are we legally required to do this?' or "Are the other banks also taking a comparable haircut?" If you value your career, you'd better have some good answers to show that you are acting on behalf of the bank.

On Friday, November 7, 2008, a subsidiary of Societe Generale, another large CDO counterparty, put AIG on notice that it had defaulted on the swaps of several CDOs. And those defaults could not possibly be cured. Those defaults were triggered by the S&P and Moody's downgrades.

If 30 days had passed following the downgrade, and AIG had failed to find eligible substitutes, the entities were entitled to terminate the swaps. But Trust Company of the West did not deliver those notices of termination on October 15, or November 3, when those rights first became effective. Only after the New York Fed took over negotiations did TCW deliver that notice on Friday, November 7, the last business day before AIG was required to file its 10-Q, and the day after the New York Fed took over the process. At the Paris headquarters of TCW's parent, the business day is over by noon, New York time.

When testifying before Congress, Neil Barofsky, the Special Inspector General for TARP, said, "I think very much these negotiations could have been conducted in a different way, a more forceful way." Yes, the negotiations might have been very different, if the New York Fed had more than two business days to wrap up a a contentious 14-bank negotiation that had dragged on for 15 months. 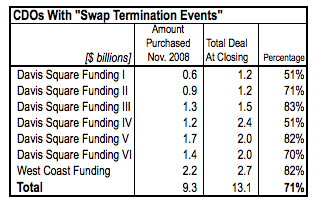 As with everything related to the backdoor bailout of the banks, timing and dates are critical. In the weeks and months following the de-risking of AIG's CDOs, the ratings of those seven deals were slashed severely. The ratings agencies are regulated by the Federal government. There is no way that Congress can understand the AIG bailout without carefully scrutinizing the decision making process behind these specific ratings and subsequent downgrades.