Every U.S. city is rushing to adopt a sustainability plan, but urban policymakers need to make sure these programs are genuinely inclusive. If their policies end up targeting only those who can afford the green American dream, then sustainability will be part of the problem, rather than part of the solution, to climate change.

The stakes could not be higher. The struggle to slow global warming will be won or lost in cities, where 80% of the world's greenhouse gases are emitted.

Last year, Phoenix mayor Phil Gordon entered the unofficial contest to claim the title of America's greenest city. Many an eyebrow was raised. Phoenix, after all, is a more likely contender for the title of world's least sustainable city. Faced with much larger environmental challenges (and more political resistance from its elected officials) than havens of green consciousness like Portland, Seattle, and San Francisco, the 1000 square mile sprawl of central Arizona may yet prove to be a more useful bellwether. Why? Because if Phoenix can become sustainable, it can be done anywhere.

According to the state's leading climatologist, Central Arizona is in the "bull's eye" of climate change, scheduled to warm up and dry out faster than anywhere else in the Northern hemisphere. This past August's record heat was too much even for the scorpions, who stayed indoors and pushed the number of reported stings to new highs. The Southwest drought watch (twelve years and counting) is still on, despite last winter's outsized runoff to the Upper Colorado, the key water supply for the spreading subdivisions of the Valley of the Sun.

From 1990 to 2007, Arizona increased its carbon emissions faster than any other American state-at a rate more than three times the national average. Once a haven for TB sufferers seeking respiratory relief, by 2005 the city's infamous Brown Cloud was drawing the lowest national grades from the American Lung Association for air quality in both ozone and particulates. And, of all U.S. cities, Phoenix flew the highest in the race to profit from the housing bubble, and it has fallen the furthest as a result of the speculator-driven land crash. As a result, Maricopa County has more vacant homes than the entire city of Tucson.

Yet many of the world's fastest growing cities are in semi-arid regions, and so, as climate change intensifies, they may share the same destiny as Metro Phoenix. The lessons learned from Central Arizona may turn out to be applicable elsewhere, and especially in the swelling mega-cities of the Middle East, Africa, and Asia. If that turns out to be the case, then social solutions will be as important as technical fixes.

The capacity of populations to share, rather than hoard, resources will be a more critical litmus test than whether the next generation of carbon-reducing gizmos can be marketed successfully to an affluent demographic. Cities already host vast inequalities. The last thing they need is a new wave of green policymaking that widens the gaps. A truly green city will have to be a just one-ensuring that no one is left behind--if it is to play the redeeming role that high-carbon industrialization has written for it. 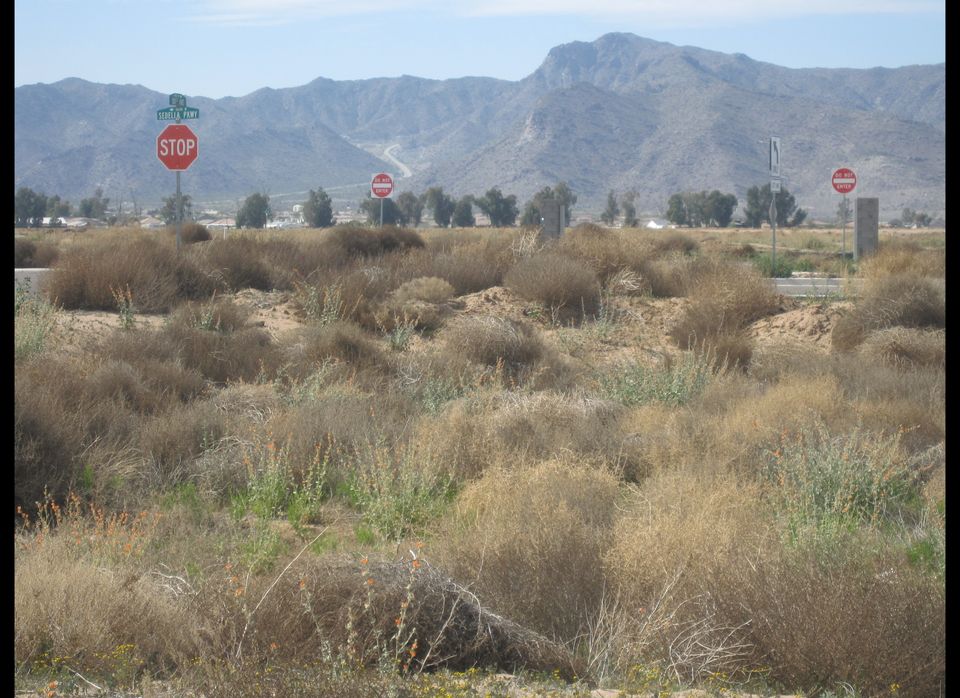 1 / 11
Tumbleweed subdivision in the West Valley
As the desert reclaims the roads, another Western ghost town is born. Overbuilding and speculation on the urban fringe has magnified the housing crash in the region. Some neighborhoods have lost 89 percent of their value, and are close to being declared "beyond recovery." The growth machine is broken, but politicians are still praying for another housing boom. Lobbyists from the Homebuilders Association of Central Arizona still "inhabit the inner cavities of our elected representatives," as one public official put it to me. Their eyes are fixed on the millions of new lots are that have already been titled in the "premature subdivisions" which stretch along the Sun Corridor between Phoenix and Tucson, waiting to be filled up by brown-tiled roofs.