Whenever I try to analyze China's sustainability policies I am mindful of the fact that I am far from an expert on China's history, culture, economy or politics. It is clear that China's policy context is complex and differs from the one we know here in America. Nevertheless, even a casual observer can see the intense drive to bring sustainability factors into the massive national mission to grow China's economy. Like that drive to grow the economy, the effort to add pollution control, renewable resources and concern for ecology to that growth is a clear and prominent part of Chinese public policy.

Last week, my colleague Dr. Dong Guo and I spoke at two conferences in China on our collaboration with the China Center for International Economic Exchanges (CCIEE). We are engaged in a multi-year effort to begin the development of a shared set of sustainability metrics. One of the first products of that collaboration is a framework for urban sustainability focused on Chinese cities, which we presented at CCIEE's biennial summit. At this high-profile economic policy conference focused on sustainability, we also learned that the new Asia Development Bank created by China would lend capital according to green principles. This movement to sustainability and our participation at the summit was noted in a blog post by Earth Institute researcher Kelsie DeFrancia. According to DeFrancia:

Last weekend, Earth Institute executive director Steven Cohen and post-doctoral research scholar Dong Guo participated in the Fourth Global Think Tank Summit in Beijing, hosted by the China Center for International Economic Exchanges (CCIEE). CCIEE, the preeminent think tank in China headed by the former vice premier, hosted hundreds of politicians, scholars, business leaders, and experts from nearly 30 countries at the summit. For the first time, the biennial summit focused on promoting global sustainable development, showing that China is recognizing the significance of this important field. In a session on "Green Growth," Cohen shared his expertise on sustainability and developing a green economy alongside leaders from China, Europe, and the United States, including Fredd Krupp, president of the Environmental Defense Fund, and Amory Lovins, co-founder, chairman emeritus, and chief scientist of the Rocky Mountain Institute.

Following this landmark event, our next stop was in the fast growing Chinese city of Guiyang where several thousand people were attending the annual Eco Forum Global conference, where I also delivered remarks at its closing ceremony. Our Columbia colleague Dr. Satyajit Bose joined us at this conference and participated in a series of wide-ranging discussions on sustainability policy and management. This second conference was devoted to environmental issues, and the scale was something you do not see often in the United States; I can't remember when an environmental conference here caused traffic jams or helped sell out hotels. In the U.S., this kind of congestion takes place at climate marches and anti-pollution demonstrations, but not at conferences when people are delivering academic papers and giving policy speeches.

I believe we are seeing Chinese economic and public policy pivoting to address the damage to health and the environment that has been endured during the massive development push of the past quarter-century. While that push is far from over, those in power have decided that it is time to direct a greater national effort to preserving and protecting natural resources, while continuing economic growth. The thick black haze that frequently settles over some Chinese cities provides ample rationale for this effort. People in China know that they must pay attention to the damage they are doing to their land, air and water.

The lesson that the United States and Europe may offer is that it is possible to continue to grow the GDP while reducing the absolute level of pollution. This is because pollution control and pollution prevention adds to economic activity and can modernize the technological base of production. It must be paid for, but particularly when pollution control is not an end of pipeline retrofit, pollution control can reduce costs by reducing waste. This is most obviously the case with energy efficiency. Saved energy is obviously saved money. The idea that we must trade off the environment against economic growth is incorrect. First, we have demonstrated it is possible to reduce pollution while growing the economy. Second, the cost of repairing damage to the air, water and land must inevitably be paid. Think of it as a form of deferred maintenance. You can patch the roof once or twice, but eventually the patch no longer holds. If we poison our own well water, eventually we either have to filter the water or dig another well. The principle is pay now or pay later. The costs of preventing damage are typically lower than the costs of repair or reconstruction.

The massive development effort now underway in China is hard to miss. The skyline is dotted with scores of construction cranes as new and larger buildings are built. China's ability to focus national effort in a single direction is obvious. Nevertheless, with all this development underway and all this money being made, it is east to suspect that the longer term perspective required for sustainability will not survive. It is possible that the pressure to develop rapidly coupled with the desire to make a quick buck (or more specifically a quick Yuan) will dominate the desire to breathe.

I hope not and I suspect that the forces of sustainability have the upper hand. A civilization that has been around for thousands of years has a sense of history and may be more capable of patience than our own still relatively new nation. As in the United States, young people are a major force behind the move to protect the environment. The carelessness of some industrial practices and the lack of regulatory enforcement are visible to the eye and obvious to anyone's respiratory system. These facts are creating the same type of political pressure that resulted in the move to protect the environment in the United States during the 1970s. Although our political systems are radically different, the need for political and economic elites to respond to the demand for change is the same.

As I often say, while rich and powerful people can insulate themselves from many environmental insults, they cannot avoid all of them. In the end, human biology unites us. The rich and powerful are the same organisms as the poor and powerless. Moreover, sustainability management is teaching us that we can develop our economy and live well, while preserving the planet. It is a matter of focusing human brainpower and ingenuity on the problem of producing the food, water, energy and other consumer items we need and want while damaging the planet as little as possible.

I left China encouraged by the widespread receptivity to the theory and practice of sustainability, but aware of the huge challenge that lies ahead. As we flew from Guiyang to Beijing for the return flight home, I looked down and saw a countryside dotted with scores of windmills. The transition from a coal-based economy to a renewable one will not be simple or quick -- but it has begun. The challenges of ensuring that there will be sufficient economic growth to reduce China's poverty rate is a profound one. While people may have been telling me what they knew I wanted to hear, I sensed a growing commitment to the goal of growing that economy without destroying China's natural environment. The related goal of developing a practical set of sustainability metrics is an indication of the seriousness of the effort. Once indicators are in place, we will have a better handle on how much of China's sustainability policy is talk and how much is action. 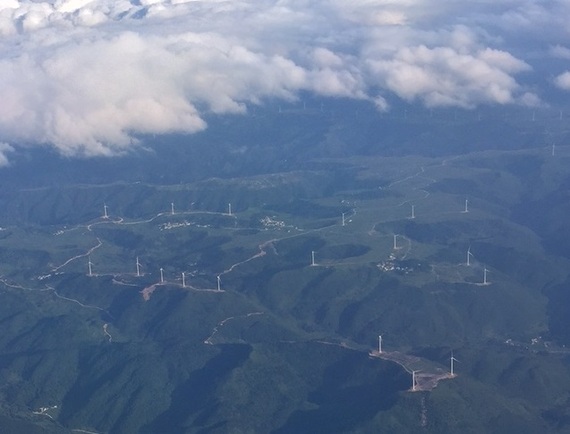