Earlier this year, I met Tom Rasmussen and interviewed him for our Billions Rising book. He told me about driving along a highway in Zambia and seeing a group of women with their toddlers sitting on the side of the road. The women had a small pile of tomatoes in front of them, hoping to sell them to passers-by. He thought,

This is not an efficient use of these women's time to be sitting there in the hot sun, trying to sell 12 tomatoes and risking the safety of their children.

But he did understand that these were very poor women who simply did not know what else to do.

But there was something Tom could do. As a principal in the Institute for Self-Reliant Agriculture (SRA), he went to a major grocery chain there in Zambia. He spoke with a manager and offered to bundle together the surplus from a number of the local farmer families. Would the store be interested in buying their produce? And the store said "Certainly. That would be a lot better than trucking it in from South African or elsewhere." With just a little outside knowledge and support, a large number of families in Zambia now benefit from a better price and a more structured market. 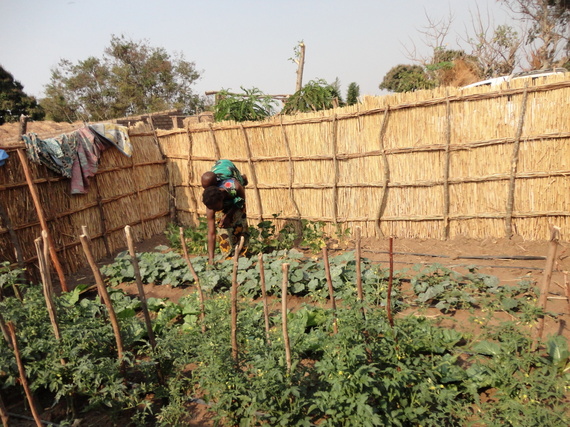 Those women with their dozen tomatoes are a tiny fraction of the millions of people living in rural areas who farm very small plots of land. In Central South America and in throughout the African continent, many small farmers live on a hectare or a less; that's two and a half acres. Traditionally, these small farmers have been encouraged to grow a cash crop. But once they harvest and sell it through a middle man, they can't earn enough value to buy the things their families need. Also if every farmer in a given area is growing the same crop, it creates a condition called "monocropping," which leaves crops much more vulnerable to pests and disease. 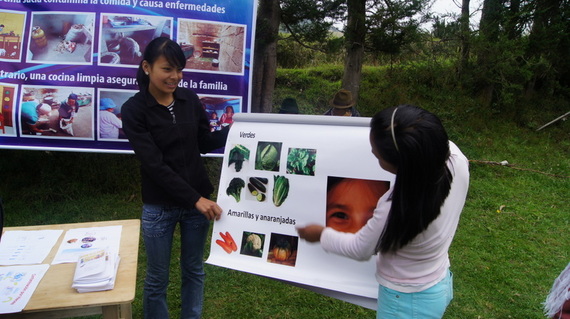 Tom Rasmussen and others at the SRA are showing those farmers a different way to use their land. They teach a three-stop process to self-sufficiency, which lifts families out of poverty. A small, contained, rotational garden is the first of the three steps. In many parts of the world where poverty is most severe, the climate allows for year-round planting. With some practical instruction and starting materials like seed and equipment, a year-round garden with a variety of vegetables can provide complete nutrition for a family. In step two, the family adds a variety of crops to their fields, including feed for the animals which they will add in step three. 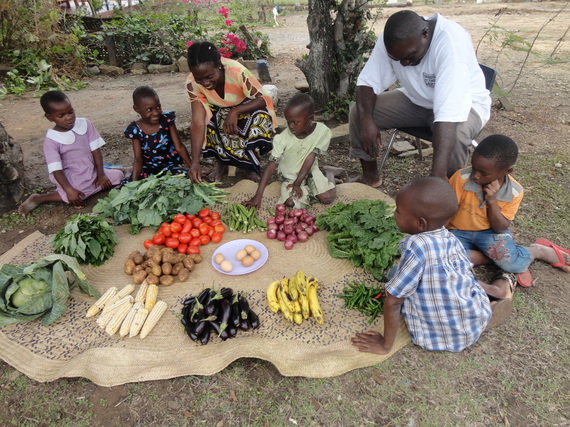 The animals chosen depends on the culture, and are usually smaller animals like guinea pigs, chickens, rabbits, sheep or goats. They take less space, and can provide not only valuable protein for the family but also can be used as a commercial component later on. Smaller animals are practical to feed too. Rabbits and chickens have a high rate of return at only two and a half pounds of food per pound of protein. They will flourish quite well on refuse from the garden. In some cases there might be room for a goat or sheep which can also provide milk. Cows take nearly 15 pounds of food to convert to a pound of protein. A cow produces a huge amount of food, but for most of these rural communities, there are no good storage options.

When these three steps all come together, you get a self-sustaining family. The SRA has found that on one and a half hectares they can create complete self-sufficiency for a family of six. As each family is successful with their farm they are encouraged to pass the teaching on to their neighbors and broader community, and to develop local cooperatives with their neighbors. They then can barter and share, which builds community cohesiveness.

There are two aspects of the SRA system which I really admire: one, they strive to be as culturally sensitive as possible -- respecting local leadership, listening to people's needs, and altering planting styles to adhere to traditions even as new crops are introduced. Two, they don't just hand everything over to the people as a gift; they enter into a business arrangement with the communities they are helping. They lend the seeds, animals and technologies. Once the families are creating surpluses, they then pay back SRA and go on to become teachers to other families. Eventually there is no need for any outsiders to be a part of the process and the farmers can feel pride in their accomplishments, knowing they were able to purchase the education and tools they needed.

Programs like this build a smarter, stronger population. Self-sufficiency and self-reliance at a family level means a healthier family with dignity, the ability to work even harder if they wish, or to get an education and participate more fully in the care and development of their community. One small step to a better world.