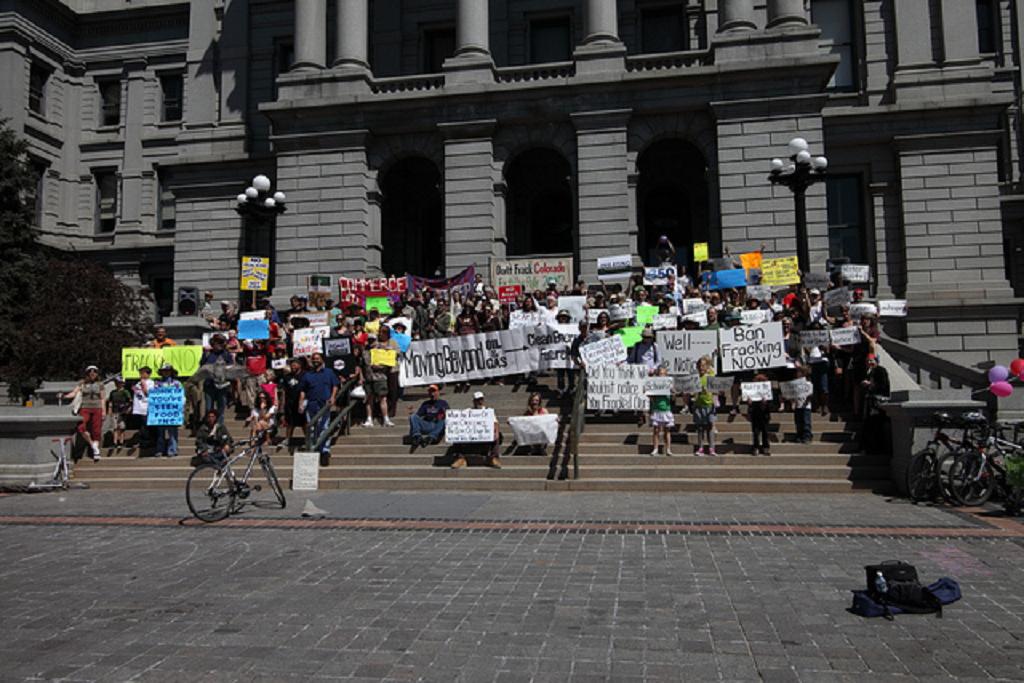 The week prior to Senator Morgan Carroll's May 2 introduction of SB 107 (The Fracking Safety Act) to the Senate Judiciary Committee, an oil drilling site near Windsor operated by Ranchers Exploration Partners based in Greeley, was issued a cease and desist order by Colorado Oil and Gas Conservation Commission, which declared an environmental emergency. The site, located in unincorporated Larimer County above the Ridge West residential subdivision, the Poudre River and a lake, was declared a public health hazard after the drilling rig became unstable and brought up potentially toxic solid waste from the landfill upon which it was positioned. The COGCC had issued a drilling permit in September 2010, and state health officials were satisfied that the company had moved the drilling site sufficiently away from the landfill, based on a June 2011 six-foot test drill over the site. Ranchers Exploration plans to move the drilling rig yet again to another site on the same property, ostensibly away from the old landfill.

The COGCC's field inspection of the drilling site concluded that Ranchers Exploration failed to follow "most best management practices for drilling sites," e.g., failing to build secondary containment for "storm water runoff, sewage, chemicals and other toxins that might flow off the drilling pad."

The incident points out why communities around the state are organizing to address threats to air, water, soil and human health posed by the fast-tracking of horizontal hydraulic fracturing (fracking), as oil companies rush to cash-in on numerous public and private land leases for gas drilling in rural and urban areas of the state. There was a sense of urgency in much of the May 2 testimony before the legislature about well sites positioned adjacent to, or on residential property, farms and schools. Split-Estate is the title of a documentary film dealing with conflicts that may arise between surface land owners in the western United States and those who mine energy and mineral rights below that property.

At the hearing for SB 107, a food producer from Larimer County stated the case for ensuring water quality for crop culture. A resident of Elbert County warned of the dangers of an oil rig 150 feet from a home, citing more than 1,000 cases of water contamination reported near fracking sites across the nation over 18 months.

A teacher and mother from Green Valley Ranch in northeast Denver spoke of a well planned within 1/4 mile of a school there. She speculated on the need for industrial strength air filters to protect homes against proposed fracking activity. At least four residents from Commerce City, home of the Rocky Mountain Arsenal Superfund Site voiced concerns about drilling where there is possible underground migration of stored Sarin and Mustard gases; the lack of enforcement of regulations, where "fluorescent blue-green liquid" has been observed leaking around a well, and contaminated water sits uncovered; and a well pad is situated within 600 feet of a residential area.

Jen Palazzolo, a founding mom of Erie Rising, is working with parents to head off hydraulic fracturing that is scheduled to begin May 26 next to Red Hawk Elementary School. In response to a National Oceanic and Atmospheric Administration study demonstrating considerably elevated levels of propane and butane associated primarily with oil and gas production in Erie, the Board of Trustees in early March imposed a six-month moratorium on new applications for mineral extraction, including fracking (excluding hundreds of active wells). Propane and butane can mix with other chemicals to create ground-level ozone, a respiratory challenge for many. Nearby communities of Longmont and Boulder have also instituted moratoriums on new wells.

Horizontal hydraulic fracturing is not your father's oil and gas drilling anymore. Nor is it the vertical hydraulic fracturing practiced since the 40s. Sonia Scrima, and organizer of What the Frack?! in Arapahoe County, observes that since 2005, hydraulic fracturing has been combined with horizontal drilling techniques that can extend as far as two miles horizontally to access to deep underground shale deposits like the Niobrara shalebeds in Colorado. Sonia Scrima dates the "fracking frenzy" to the unprecedented 2005 oil and gas exemptions from eight federal health and safety laws, including the Clean Air and Water Acts, known as the "Halliburton Loophole" (pushed by former Halliburton CEO Dick Cheney).

The regulatory vacuum surrounding the impacts of fracking "precludes urgently needed wide-scale scientific study," observes Scrima, who describes the industry calculation as "short-term gain for the few." The larger impacts of horizontal slickwater hydraulic fracturing encompass extraordinary amounts of fresh water injected (each well is fracked 5-20 times using an average of five million gallons of unreclaimable water each time), increased use of toxic chemicals, including known neurotoxins and carcinogens, and application of up to 10,000 pounds of pressure per square inch. Virtually eliminated has been EPA oversight by monitoring and data collection, as well as proper classification and handling of toxic materials, notes Scrima.

Senator Carroll's bill attempted to address the need to set standards for best safety practices regarding fracking near radioactive materials, explosives and munitions; Superfund sites (such as Conoco's planned fracking operations at Lowry bombing range), as well as requiring increased setbacks for high-risk areas; closed-loop storage in place of open pits; air quality standards and water quality testing before and after drilling, with posting of Water Quality Reports on a public website; and the reduction of toxic, carcinogenic materials in fracking fluids. Senator Carroll noted the shortage of inspectors: 15 inspectors with COGCC have been charged with overseeing 45,793 wells, that is, one inspector for 3,050 wells.

On May 2 SB 107 passed out of Senate Judiciary on a vote of 4:3 along party lines with support of Democrats, and Senator Carroll says it does not have the votes to get out of Senate Appropriations. With adjournment of the Colorado legislature on Wednesday, May 9, none of the measures to address the risks of fracking will have passed the legislature this session. Senator Carroll reports that the COGCC has initiated a process through rules to consider increasing set-back distances, and she encourages emailing COGCC members (at dnr.ogcc@state.co.us) to encourage greater set-back distances from homes, schools, water supplies, radioactive materials, explosives and Superfund sites.

The Need to Protect Air Quality

A recent three-year study by the Colorado School of Public Health study linked air emissions from hydraulic fracturing activities to increased risks of cancer and non-cancer illnesses, citing air pollution that may contribute to "acute and chronic health problems for those living near natural gas drilling sites." Specifically, it found that residents of Battlement Mesa in Garfield County who reside within 1/2 mile of a hydraulically fractured well have an increased risk of contracting illnesses due to volatile organic compounds (VOC) that drilling operations release into the air.

Battlement Mesa residents are part of what is deemed a test case for class actions alleging harm from hydraulic fracturing, contending that gas development at a well pad near the community has resulted in residents' health impacts from air and water contamination, as well as reduced property values related to plans to drill up to 200 additional wells within town limits. Redlining by banks and mortgage companies of communities where oil and gas drilling is planned has been reported by some realtors.

Recently issued EPA regulations would for the first time limit emissions of certain volatile organic compounds from natural gas wells that react with sunlight to create smog. However, the EPA granted oil companies a three-year period to install technology to capture methane, a potent contributor to climate change.

Of particular concern in the semi-arid climate of Colorado, whose namesake river serves much of the West, is the shear amount of water used up and permanently removed from the system by fracking. "In my opinion, the protection of our rivers, or what remains of them, may be the most important natural resource issue to confront the people of Colorado in recent times," states Phil Doe, former Bureau Chief and Environmental Compliance Officer for the Bureau of Reclamation in the Dept. of Interior, a whistle-blower featured on "60 Minutes."

Doe observes that every stream in the front range is already over-appropriated, while each fracking well uses an average five million gallons of water -- water that becomes polluted and cannot be returned to system. Water that has traditionally gone to agriculture is now used for hydraulic fracturing by oil and gas companies, reportedly the top bidders at Colorado's premier auction this spring for water supplies once claimed exclusively by farmers.

It is estimated that the transportation of a million gallons of water (fresh water to the site or waste water from the site) requires 200 truck trips, not only depleting fresh water supplies and impacting aquatic habitat, but also impacting local air quality, safety and roads. Mining sand that is transported to inject into fracking wells also impacts water consumption, air emissions, and health problems related to crystalline silica.

Doe observes that oil companies are rapidly stepping up their activity. Despite oil and gas industry assertions of job creation, he reports that 67,000 jobs were created over 8 years. Many drilling site jobs are filled by out-of-state temporary workers.

Studies conducted by the oil and gas industry and interviews with industry regulators reveal that 20 to 85% of fracturing fluids may remain in the earth, a continued source of groundwater contamination for years into the future. Fracking was cited as the source of groundwater pollution in a central Wyoming town by the U.S. Environmental Protection Agency in 2011.

On Earth Day a cross-section of some 20 statewide groups, including Commerce City Unite, Erie Rising, LongmontROAR, What the Frack?! Arapahoe County, Boulder-based Clean Energy Action and Denver Community Rights gathered at the state Capitol. A core issue for these groups is the right to regulate oil and gas development locally to protect air and water quality and personal property, as at least 55 communities nationwide have done, some by writing their own local Bill of Rights.

Phil Doe is working with Richard Hamilton to spearhead the effort to place Initiatives 3 and 45 on Colorado's November Ballot. Initiative 3 establishes through Public Trust Doctrine the public's ownership of and right of access to Colorado rivers and streams. Initiative 45 defines beneficial uses and prohibits the destruction of the public's water by any means. The initiatives, recently held up in the State Supreme Court, are reported ready for gathering over 60,000 signatures of Colorado voters on petitions.

Gregg Eells is a civil engineer who, with his partner, James Pequette, formed the company KALA Consulting in 2009 to design renewable energy fuel alternatives. They advocate Butanol, or plant-derived "higher alcohol" fuels that can be "drop-in replacements" for gasoline, while providing significant supplementation for diesel fuel. Nothing new, they cite the fact that British and Japanese fighter planes ran on Butanol during World War II. They describe Butanol made from cellulose as a superior fuel, providing good mileage, lower release of volatile organic compounds, biodegradable if spilled, and safer to handle, move and store, while capable of reducing greenhouse gas emissions by 88%. The single barrier to greater knowledge of this fuel option seems to be oil company resistance.

Eells and Pequette wrote The Strategic Fuels Initiative that would reduce dependency on fossil fuels and greenhouse gases, while increasing jobs. They have presented the initiative to Senator Mark Udall, with no response to date.

Clearly when it comes to environmental protection, public health and sustainable energy, a groundswell of action by the people is required. 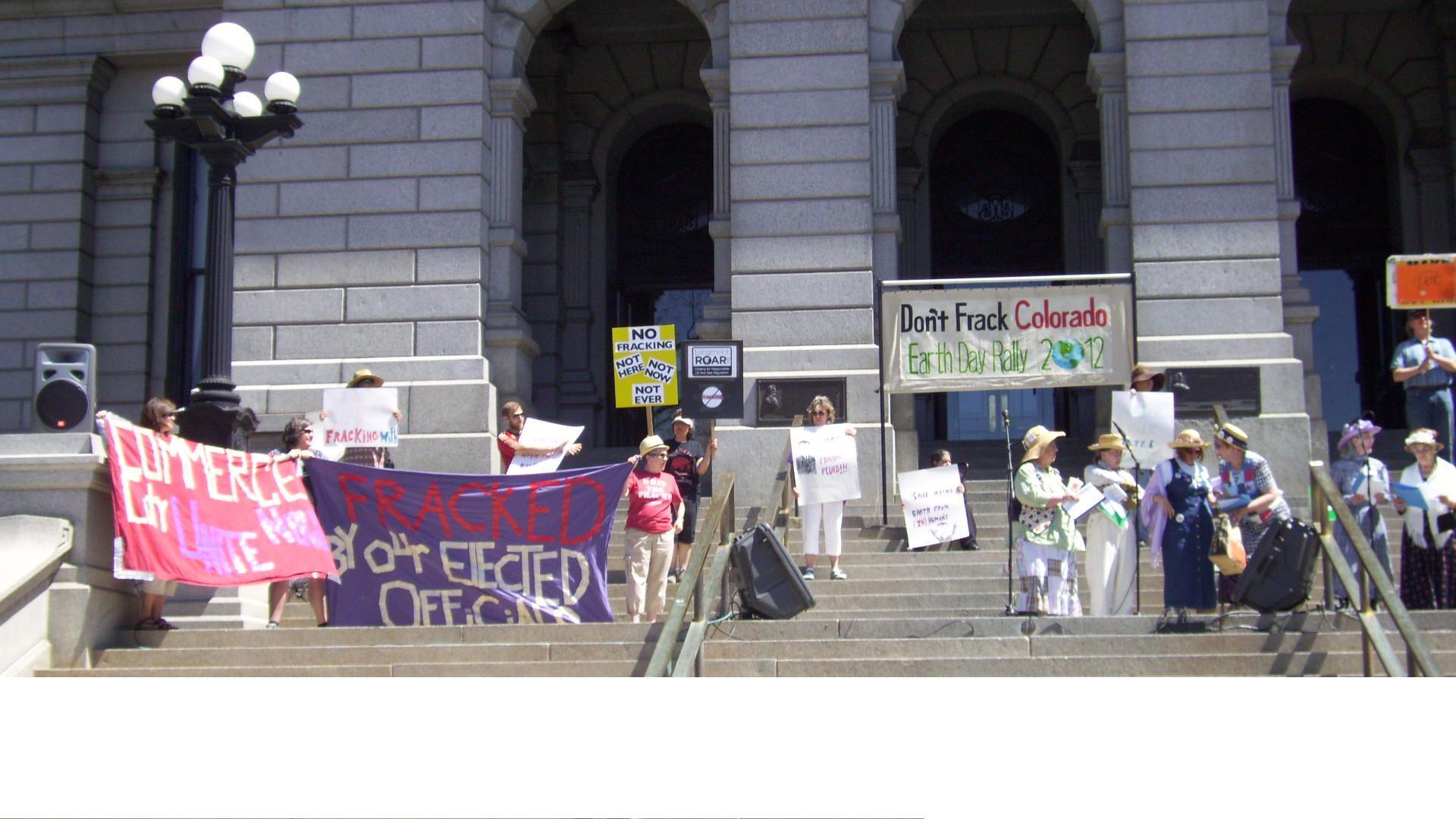