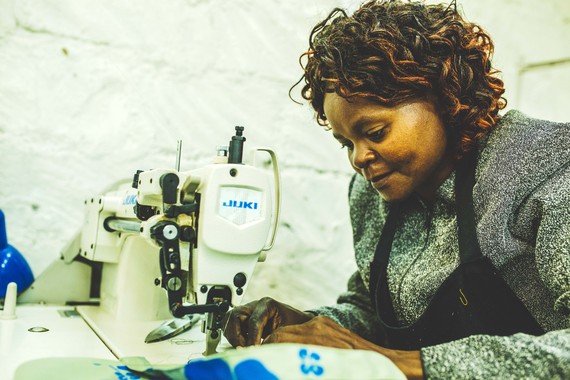 While sustainability should be built into supply chains, the fashion industry is today responsible for much of the exploitation of people and the environment: number one in terms of exploitation of people and the second most polluting industry after oil. Looking at the ecosystem of this industry, these drawbacks can be improved by proposing alternative business models, the use of technology and the engagement of governments and consumers.

Some major retailers and brands - prompted by outraged consumers, workers' advocacy groups and by the general public - engage in CSR schemes to improve their supply chains and public relations. This is a first step, albeit often triggered by factory inspections and audits. But this is not enough. Why? Because supply chains are structured to meet the interests of two strong stakeholder groups: the companies based in the developing world and the big western retailers and brands. Then there are mega-suppliers who carry out the matchmaking between both these entities, often at the expense of people with only profit margins and tight production deadlines on the agenda.

The Buyers, the Factories and the Mega-suppliers

Most companies based in developing countries are forced to work within Cut, Make and Trim (CMT) or Cut, Make and Pack (CMP) schemes. This means they receive materials for a product already designed that they cut, sew and ship. For many, this is a favorable deal that allows them to work more autonomously in the supply chain of fashion as it makes provision for shortcomings such as the lack of design skills, lack of access to materials and lack of credit schemes to name a few. In a nutshell, such companies from the developing world can only operate in a specific segment of the value chain. By doing so, they access international markets and are able to start a growth process. A process that could one day also expand in terms of capacities and outreach. At the same time, the big retailers compress the cost of labor to justify their massive investment in marketing and retail and all for their customary high profit margins. The only way for them to meet their business objectives is to hand over this segment of the supply chain to a third party that can minimize the cost of labor. This enables them to rid themselves of an enormous fixed cost that is transformed into a variable cost: they become detached from the factories where their production takes place.

Following this logic, large retailers and brands need suppliers based in countries with a low cost of labor: those working within CMT schemes. To manage this, they need intermediaries: brokers who can organize this production, disperse it among different suppliers and deal with contracts and the wearisome side of production. As such, the supply chain remains traceable only up to this first tier of suppliers. The more layers of suppliers, the more powerful these intermediaries and the lower the prices they can get for their customers. The infamous case of Rana Plaza illustrates the complexity of supply chains in fashion. Walmart commissioned their production to a tier 1 intermediary, Success Apparel, that in turn hired another company, Simco (tier 2). Simco, without informing Success Apparel, then hired yet another company, the Tuba Group (tier 3), which was unknown to the tier 1 company. Tuba Group also subcontracted part of the production to a company they owned: Tazreen (tier 4). Tazreen operated in Rana Plaza. The American buyer was unaware of what happened beyond tier one, but benefited from the possibility of minimizing labor costs.

This system has created a supply chain in which buyers are separated from factories. The supply chain is dispersed, complex and faces strong power imbalances between buyers and the layers of suppliers. Furthermore, this system encompasses a variety of workers, all in a very weak position: employees, casual workers, home workers, migrant workers and so on. Many of these workers are women, who because of social gender structure, do not have bargaining power, and thus are paid less than men. We could easily say that poor women subsidize the fashion industry! For all these reasons, the system is basically impenetrable by normal CSR audits or inspections. Inspections alone cannot depict the entire map of suppliers.

Unlike what one would think, this business model does not only apply to fast fashion. Luxury brands have learned from the lessons above and restructured their supply chains according to mainstream fashion business models. The way in which some luxury companies treat suppliers (Small and Medium Enterprises and artisans) is aimed at requesting a progressive reduction of prices without taking the responsibility of how it is achieved. For instance in Europe, there is news of illegal workers employed by tier 2 or 3 suppliers who produce bags and accessories for brands we all know.

Today, the system of fast fashion is applied, mutatis mutandis, to luxury fashion. In the case of luxury, the scenario is slightly different: margins are higher, thus there is room to invest in improving their environmental footprint. Many luxury brands seriously invest in environmentally friendly materials and processes. This is good, very good. But the business model above remains: they carry on minimizing the cost of labor through tiers and tiers of suppliers who manage production. As long as it stays this way, no real sustainability can be achieved.

Another unsustainable feature, which is unique to luxury brands, is the frequent misuse of artisans in developing countries. In search for inspiration, they contact artisans through their design teams to discuss ideas on decorations, fabric, traditional skills and materials etc. Samples are produced and designers get to become familiar with designs and shapes that belong to other cultures. These ideas are used to develop designs, but often the artisan does not see a penny of reward, as only a small percentage of ideas become a commercial product. Commonly, this "idea" is produced elsewhere by a trusted tier 1 supplier, thus the contribution of artisans is limited to product development, badly or even not paid, with the promise of future orders. There are exceptions to this, but they remain exceptions.

We must acknowledge that striving for sustainability is similar to implementing policies to protect and enforce human rights. It is an approach that requires a journey full of trials and errors, with a progression towards a set of clear milestones and objectives. This means sustainability cannot be achieved in a fortnight, as it requires time and a plan. But, most of all, it requires policy. Some key actors and actions can have an impact on how fast this move towards sustainability materializes:

Will we see change? I believe so. Look at the Kering group, the umbrella to some of the most coveted luxury brands today, investing in developing chrome-free leather - something unthinkable not so long ago. People and brands change, and this change is already happening: we are already seeing positive results. Now it is time for states and international organizations to come up to the stage, not with standards, but with laws.

The booming technology industry can have a strong role into the fashion industry's journey towards sustainability. In the future, I imagine we could use apps that map and structure supply chains, making them more simple and transparent. Beyond organizing delocalized production, these could become powerful tools for industry mangers and creative directors to develop new products and predict the impact of orders in those places. But change is an imperative and even slow change will produce many forms of disasters, as we have reached a point of almost no return. The masses of desperate refugees that are hitting Europe right now are running from wars but also from unbearable living conditions, lack of work, lack of water and food. A supply chain like fashion, with its ramifications all over the world, can contribute towards creating a better world for everybody. Or the opposite...