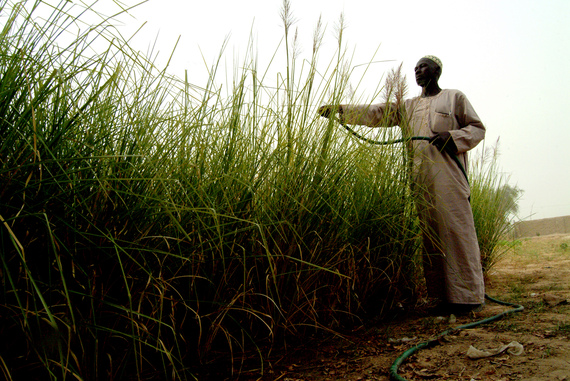 A farmer waters grass at a research centre that works to regenerate endangered native species and introduce varieties that are better adapted to hotter, drier conditions in Mopti, Mali. ©IFAD/Amadou Keita

More than seven billion people currently call our planet home, and their lives depend on finite resources. With both climate change impacts and populations on the rise, we need to understand how we can meet the growing food demand while simultaneously preserving the environment and building community resilience. Agriculture and the environment are often in competition, because one needs to use what the other needs to conserve. Building sustainable agriculture is therefore critical for our future, especially in view of climate change.

Agriculture is severely affected by climate change. It is estimated that by 2050, 22 per cent of cultivated areas will suffer impacts, agricultural production will shrink by 2 per cent every decade and rising ocean temperatures and acid levels will lead to declines in fish stocks. At the same time, demand for food will increase by 14 per cent and we will need twice as much dairy and meat products than were produced in 2000.

The 2.5 billion smallholder farmers around the world, who are predominantly poor, have been seen as both the victims and the culprits of climate change. Poverty can lead to people to act in self-defeating ways, for example farming in destructive ways that are unsustainable and contribute to climate change.

Farmers know that "eating the planet" in order to feed their families undermines the very sustainability of their production systems and their own food security in the future. But they continue to do so for three main reasons.

Incentives
Incentives drive human behaviour. From an individual smallholder's perspective, eating up resources may be perfectly rational behaviour. Externalizing costs and internalizing benefits is common when you use a public resource that has no price and no enforcement system to prevent or regulate its use.

This situation is called the "tragedy of the commons". It happens when individual users, acting independently according to their own self-interest, behave contrary to the common good of all users by depleting a shared resource through their collective actions. Commons can be any shared and unregulated resource such as land, water, forests, or fish stocks. It is important to realize that though self-destructive, these are normal behaviours where individuals are responding to prevailing incentives. Nothing will change unless we change the incentives.

What can we do about that?
Commons can collapse due to overuse (such as overfishing, land degradation or deforestation), but there are also examples of communities that have used common resources prudently for generations (for example indigenous peoples). Although it is often claimed that only private ownership or government regulation can prevent the tragedy of the commons, people themselves can devise complex social schemes to maintain efficient resource use. But there are some critical preconditions:

A matter of time
Eating is a necessity, and when you are a poor farmer dependent on your own production, you find a way to grow food and eat by whatever means necessary and at least cost. At the household level, the short-term is all that counts. And for a poor person, there is no long-term if there is no short-term. Even if that means taking actions with negative long-term consequences.

Short-term objectives and the underlying incentives are inducing farmers to degrade the environment to be able to feed their families. Protecting the environment, addressing climate change, and reducing the carbon footprint are medium-term objectives. If they appear to compete with short-term needs, they may seem too remote to matter at the level of a poor household.

So, can the gap between the short-term and the long-term be bridged? Are those famous "win-win solutions" really available, and if so at what cost?

Incentives matter to development. Strategies and resources are important but we also have to understand how people live and what drives their choices.

Should a farmer alone have to bear the costs required to make a particular agricultural practice more sustainable, when it is for the common good and a benefit to the whole world? We can't expect poor farmers to internalize costs and externalize benefits.

The poor don't have the luxury of making short-term investments in order to obtain a medium- or long-term gain for public benefits. This therefore becomes a public policy issue, because there may be a clear public good in ensuring that short-term actions are made climate-smart, for long-term sustainability. Some sort of smart subsidies or better policies have to be applied to fill the gap between the short-term and the medium-term. Unless we address this issue at the local level, many of our statements about sustainability and win-win solutions will remain wishful thinking.

Here is where technology can help, if it is a cost-conscious (affordable for poor farmers) and adaptive technology that is also capable of recognizing traditional practices that smallholders have accumulated across generations. IFAD's Adaptation for Smallholder Agriculture Programme (ASAP) is an example of how adaptive technological change and innovation can be implemented through traditional agriculture projects. The approaches include agroforestry, rangeland management, watershed management, conservation agriculture, biogas, drip irrigation, rainwater harvesting, early warning systems, reducing post-harvest losses, risk assessment techniques, and financial inclusion.

Market Failure and Externalities
The economic theory behind the supply and demand curves assumes that producers (the supply) and consumers (the demand) are represented by totally different constituencies, each with its own curve. It is also assumed that the price of the products being manufactured reflects their cost and that neither government subsidies nor environmental degradation cause distortions. But while the price of unsustainable production may be apparently low, its real cost--for our future--may be much higher.

So what happens in the case of the 2.5 billion people who are simultaneously producers and consumers and work for self-sufficiency?

There is a problem if the price of an agricultural product in the market only reflects the cost of the calories and minerals that it contains, and not how that particular product keeps large rural communities employed, is produced in a way that protects resources, maintains social and cultural values in the villages, and preserves biodiversity.

Market prices do not necessarily capture all those benefits for society, nor do they compensate smallholder farmers for generating them. If we do not address the real costs and benefits of sustainable agricultural production, farmers will have no incentive not to externalize their costs, and thereby further degrade the environment.

That's why consumer education is so important. If consumers understand the real value of a product and are willing to pay a premium for those that are grown according to higher standards, they create opportunities for smallholders to be part of a sustainable solution.

Therefore consumers are important in shaping food distribution systems and value chains. We also need a better understanding of how public policies and investments can offer stronger incentives, creating a road map to help smallholders deliver more sustainably and capture more of the value of their products. That is a global public good we all can share in.