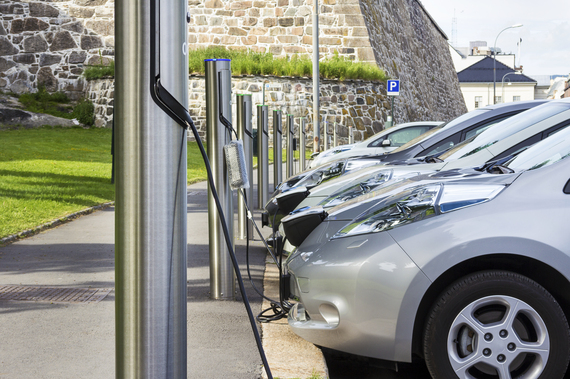 "The Week that Electric Vehicles Went Mainstream" was the headline of a recent blog posted by Tesla Motors. Just one week before, the company began taking reservations for its long-awaited consumer-priced sedan, which will begin production in 2017. The response was unprecedented.

According to Tesla, they received 325,000 reservations in one week, which corresponds to about $14 billion in implied future sales - the biggest one-week launch of any product ever.

Commentators were quick to point out that electric vehicles (EVs) still only represent a fraction of a percent of total vehicles on the road; only 500,000 of the 66 million cars sold worldwide in 2015 were electric.

The fact is, we can and must do better to increase the share of renewables in transport. The sector is one of the fastest growing, consumes around one-third of global energy, and offers some of the greatest potential to move our energy system into a post fossil-age.

Achieving the climate ambitions announced by heads of state in Paris last December - with all of the benefits that this implies - will require major new efforts to boost the share of renewable energy in transportation. This is true for road transport, but also for aviation, shipping, and road freight which are growing faster than other forms of transportation.

Recent analysis by IRENA shows that quadrupling the share of renewables in transportation - from about 3% at present to 11% or more in 2030 - is not only necessary, it is doable with existing technologies.

However there is no one-size-fits-all solution due to regional differences in modes of transport. To achieve an 11% share of renewables in transport, three things must happen:

1) We must accelerate the electrification of the transportation sector

Electric vehicle sales need to grow 20 times over, to an average of 10 million per year between today and 2030. This means that by 2030, EVs would represent about 10% of all passenger vehicles. As the Tesla announcement shows, affordability is a key factor driving consumer demand. Making electric cars affordable largely depends on bringing down the cost of batteries. This can be accomplished by achieving economies of scale as production increases.

Another key factor driving consumer demand is the availability and convenience of charging infrastructure. This has always been something of a chicken and egg scenario: in the absence of sufficient (fast) charging points, consumers will wait to go electric. But there is little incentive to invest in charging points in the absence of a critical mass of EV owners. This is why governments and cities must take policy action to support the development of charging infrastructure, which brings me to my next point.

2) Sustainable transportation choices need to be made easier

More than half of the world's population lives in cities and this share will only increase. Urban mobility is a huge source not only of CO2 emissions but other health-damaging pollutants. And traffic congestion is a drain on the economy. In Europe, for example, congestion costs around €100 billion annually, or 1% of the EU's GDP.

With smarter planning - separated bike lanes, bike and (electric) car sharing facilities, integrated and convenient bus and metro systems for example, people can be encouraged to abandon their private cars for day-to-day transportation needs. Likewise, incentives can be created for inter-city transport to be shifted from air travel to high-speed trains.

3) We must scale up the production of advanced biofuels

There are many concerns about the sustainability - both environmentally and socially - of conventional liquid biofuels. For this reason, where liquid fuels continue to be essential (especially aviation and heavy freight) accelerated deployment of advanced biofuels is needed. Advanced biofuels are produced from biomass residues and woody biomass sources, and so do not compete with the resources needed for food production such as land or water. They also offer significant CO2 reduction potential over the oil-based alternatives.

There are currently fewer than 10 commercial-scale advanced liquid biofuel plants in operation globally; we need to increase this number dramatically - on average by 40 new plants per year through 2030. This will require aggressive national policies to create the necessary incentives given that the costs to produce advanced biofuels are currently higher than for conventional liquid biofuels and fossil fuels. Once the industry gets off the ground however, these costs will come down.

Increasing the share of renewables in the transport sector from 3 to 11% is eminently achievable target. Renewable energy solutions in transport are plentiful, and have public support, if the recent Tesla launch is any indication. As our society becomes more urban, these solutions will result in cleaner, healthier and more liveable cities for the majority of the planet's inhabitants.