Recently I had the opportunity to visit the Georgia Aquarium in Atlanta, GA,

It is an impressive attraction that houses over 100,000 animals, representing 500 species, in 10 million gallons of water. When the Georgia Aquarium opened in 2005, it was the largest Aquarium in the world. Since then the Aquarium in Singapore has claimed that bragging right. 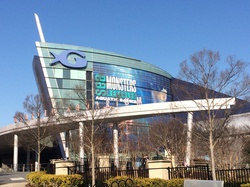 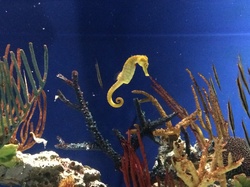 A unique feature of the Aquarium is the Ocean Voyager exhibit which houses four Whale Sharks, the largest fish in the ocean. It is the only institution outside of Asia housing whale sharks, The Whale Sharks came from Taiwan, They were taken from Taiwan's annual fishing kill quota, under which they would have been eaten had they not been purchased by the Aquarium. 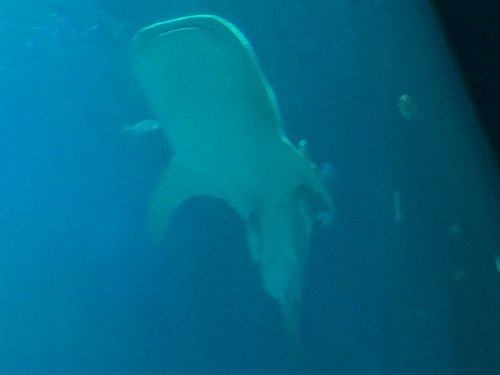 Taiwan has since banned the capture or killing of whale sharks. The ones in the Georgia Aquarium that were saved from certain death by the old policy are healthy, well fed and receive expert veterinary care.

As a professor at the USF Patel College of Global Sustainability, and Managing Director of the International Ocean Institute Waves of Change campaign, I was keenly interested to learn of the innovative educational approaches the Georgia Aquarium was taking on such critical ocean issues as climate change, ocean acidification, sustainable fisheries, and ocean pollution particularly fertilizers and plastics.

I was therefore disappointed to find that there was nothing re: climate change and ocean acidification, and fertilizer impacts on ocean dead zones.

On the positive side the Aquarium did have a 4D Theater targeted to children that addressed the issue of pollution, particularly plastics in the ocean, the important role sharks play for the oceans, and the unique part different sea creatures play in the ecosystem.

The Aquarium also takes part in the Monterey Bay Aquarium Seafood Savvy program and only purchases sustainable seafood and encourages its guests to do the same.

There were also two nice displays calling attention to the ocean plastics issue. This positive message of the plastic display though was kind of drowned out when we learned that the Aquarium receives 1.5 million visitors a year who exit the Aquarium through the gift shop where they use plastic bags. 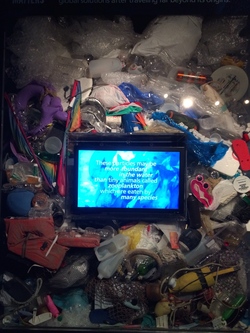 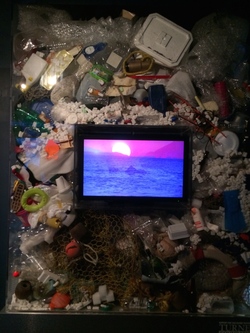 Having heard good things about the Aquarium, I then decided to dig deeper. On their website I discovered the following:

"One of the Georgia Aquarium's goals is to be a leading facility for aquatic animal conservation and research. The Georgia Aquarium conducts research to improve husbandry methods, develop innovative and exciting new exhibits, contribute to the understanding of the underwater world and apply new discoveries to the conservation of aquatic life. Every day, researchers in the Aquarium's exhibits and labs are learning more about marine life in order to develop new methods of animal care and veterinary medicine. By combining field research with the study of on-site animals in a controlled environment, the Aquarium is contributing to the advancement of human knowledge in the area of animal science."

In fact the Georgia Aquarium does seem to have an impressive research program where they collaborate with many good organizations. Some of the major research of the Aquarium includes:

One particularly research / conservation program of the Georgia Aquarium that has caused controversy is their attempt to take custody of 18 Beluga whales caught in the wild oceans by a Russian group.

On August 5, 2013, the National Oceanic and Atmospheric Administration (NOAA) Fisheries, a division of the U.S. Department of Commerce, denied a permit application filed in June 2012 by Georgia Aquarium to import 18 beluga whales to the United States from the Utrish Marine Mammal Research Station in Russia to a comprehensive beluga whale conservation program in accredited aquariums in North America.

In denying the permit NOAA stated ""We believe the ongoing live-capture trade since 1989 may have contributed to a cumulative decline over the past two decades, and we considered this in combination with other past, present and foreseeable future actions."

The Georgia Aquarium is defiantly appealing the decision.

Marine mammal controversy is not new to the Georgia Aquarium. There were also dolphin protests when they opened their Dolphin Tales show.

While all the dolphins in the show were born in captivity, the protestors do not think that Aquariums should be forcing whales or dolphins to be performing. Our observation on our visit was that the show seemed quite well received by the audience though we did notice a few times when the trainers physically struck the dolphins to get them to perform the way they wanted.

The show was well done and seemed well received by the audience, but did little if anything to educate people about dolphins and their role or needs in the ocean.

In an article in the Atlanta Journal Constitution re: the controversy, Dr. Lori Marino of Emory University, a senior lecturer in neuroscience and behavioral biology who has studied the effects of dolphin captivity for more than 20 years, isn't convinced of any educational benefit from such productions.

"There really isn't a shred of evidence that going to these shows results in any education," Marino said. "When I look at what the aquarium is doing and the context they've put all of this into, I guess they're not even pretending to be educational at this point. No matter how they dress it up -- they can have fountains and choreography -- it's still exploitation of the dolphins. They're still being made to do these stupid pet tricks."

The article goes on to say that "Aquarium representatives counter that there are plenty of educational opportunities in its exhibit, which has been three years in the making."

Whatever the "plenty of educational opportunities" is supposed to mean, I as an educator have to agree with Dr. Marino. I didn't see it.

The use of captive dolphins in an Aquarium for shows runs counter to programs in other major Aquariums such as the New England Aquarium, Monterey Aquarium, Seas at Disney, and the Florida Aquarium to name a few of the major ones. There are a few other aquariums with dolphin shows but the majority of the best aquariums have long abandoned such programs.

In addition cities like Malibu, CA and the country of India have recently outlawed such practices as my colleague Dr. Reese Halter recently wrote about in an article titled: Malibu Protects Dolphins & Whales.

The Georgia Aquarium represented though that they do have positive educational intentions when they answered their Beluga permit denial with the following statement:

"This acquisition is critical to educate people about the need to conserve belugas in the wild, learn about how to do so through non-invasive research, and help ensure a sustainable population of beluga whales in accredited aquariums in North America. This collaborative beluga whale conservation and research program focuses on:

While educating the public to better understand through educational and inspirational experiences the impacts of climate change on beglugas, it is unclear what the Georgia Aquarium has in mind with this statement.

This is particularly true when you consider that Brian Davis, the Georgia Aquarium vice president for education and training, is quoted to have said to this day his institution ensures its guests will not hear the term global warming. Visitors are "very conservative," he said. "When they hear certain terms, our guests shut down. We've seen it happen."

In contrast to the deliberate intent to not educate the public on climate change at the Georgia Aquarium, other Aquariums are not following that lead. Dr. Boyle, Senior Vice President for Conservation and Education, Association Zoos & Aquariums (AZA) said that most of the associations members have some sort of climate message.

In fact other Zoos and Aquariums are taking part in the Climate Literacy Zoo Education Network while the Georgia Aquarium has apparently made a decision to avoid this critical issue for the oceans.

Avoiding educating Aquarium guests on critical issues such as climate change, ocean acidification, and ocean dead zones will only contribute to making those challenges more difficult to solve. A strong democratic process demands an informed citizenry. If Aquariums can't or won't educate the public on the science of these issues then who can?

According to the U.N. World Tourism Organization, tourism is expected to increase from about 9 million visitors last year to 1.6 billion by 2020.

Such a sharp increase demands that tourism become more sustainable in all of its practices and to improve its methods and content of communication on key sustainability issues to its guests, employees, and the larger community.

The impacts of major ocean issues such as climate change, ocean acidification, sustainable fisheries, and pollution can not be ignored by Aquariums whose education programs are truly concerned about sustainability and the legacy we are leaving future generations.

Strong education programs that address these critical issues and include positive actions that guests can take to do their part is the only responsible educational approach for aquariums truly concerned about a sustainability and protecting our oceans.

I conclude this article with a video of images I took at the Georgia Aquarium along with the Song for the Oceans by my friend Kristin Hoffman who reminds us all that we all need to raise our voices for the oceans. Aquariums around the world need to raise their voices too through their education programs.