The plight of Myanmar’s Rohingya Muslims reached a grim benchmark this week, with the United Nations now estimating that more than 140,000 refugees have fled to neighboring Bangladesh in just 12 days to escape persecution.

Yet amid a crisis increasingly described as genocide, Myanmar’s state counselor and former Nobel Peace Prize winner, Aung San Suu Kyi, has dismissed the mounting reports of abuse as “misinformation.”

The Rohingya are a Muslim minority group from Rakhine state, where they have limited rights and are classified as illegal immigrants rather than citizens. They have long been victims of state-sponsored discrimination ― including what the U.N. has deemed possible crimes against humanity.

Rohingya militants attacked government security posts on Aug. 25, triggering renewed violence and a brutal retaliation by government forces that has prompted this latest exodus. In addition to those who have fled the country, tens of thousands of Rohingya are internally displaced.

Security officials have reportedly carried out gruesome violence, including killings, rapes and arson, against the Rohingya community in recent days.

But Suu Kyi, a former political prisoner and activist during Myanmar’s decades-long military dictatorship, has said little in the face of mounting international pressure to address the unfolding violence. Her inaction has even stirred discussion of revoking the Nobel Peace Prize she won in 1991 for “her non-violent struggle for democracy and human rights.”

In a Facebook post on Tuesday, Suu Kyi finally addressed the crisis, saying that “a huge iceberg of misinformation” has been “calculated to create a lot of problems between different communities and with the aim of promoting the interest of the terrorists.”

Myanmar’s government “has already started defending all the people in Rakhine in the best way possible,” the post continued.

Tirana Hassan, Amnesty International’s crisis response director, was appalled by this response to the crisis.

“This is a human rights and humanitarian catastrophe. In her first comments on the crisis, instead of promising concrete action to protect the people in Rakhine state, Aung San Suu Kyi appears to be downplaying the horrific reports coming out of the area,” Hassan said.

Suu Kyi’s latest comments are reminiscent of a rare interview with the BBC in April, when she denied that ethnic cleansing was taking place in Rakhine state, calling it “too strong a term.”

Suu Kyi declared that she wanted to run for president in Myanmar’s 2015 election, but the country’s constitution barred her from doing so because she had married a foreigner and had foreign children. The role of state counselor, which is similar to prime minister, was instead established for her in 2016.

Calls for Suu Kyi to take action have come from concerned parties around the world, including 20-year-old activist Malala Yousafzai.

“I am still waiting for my fellow Nobel Laureate Aung San Suu Kyi” to condemn the “tragic and shameful treatment” of Myanmar’s Rohingya Muslims, Yousafzai wrote on Twitter. “The world is waiting and the Rohingya Muslims are waiting.”

Yanghee Lee, the U.N.’s special rapporteur on human rights in Myanmar, called the situation in Rakhine “really grave,” and said it was time for Suu Kyi to “step in.”

As the crisis worsens, Myanmar’s government has tightened restrictions on desperately needed aid supplies and services in Rakhine state.

“The Muslims are starving in their homes. Markets are closed and people can’t leave their villages, except to flee. There is widespread intimidation by the authorities, who are clearly using food and water as a weapon,” a humanitarian official told Amnesty International.

As state counselor, Suu Kyi does not have authority over the security forces committing the alleged and documented atrocities against Rohingya Muslims, but there are still many ways she could help to ameliorate the situation, according to Hassan.

“Aung San Suu Kyi is the civilian arm of the government. She can immediately do the right thing. She can allow the U.N. Fact-Finding Mission in, for example, instead of not cooperating with the Mission,” Hassan told HuffPost from Bangladesh, referring to the U.N.’s blocked efforts to conduct an independent international inquiry into the violence in Rakhine state.

Hassan, who visited the Bangladesh-Myanmar border on Tuesday before speaking with HuffPost, described it as “a sea of misery.”

The government must commit to addressing the root causes of the conflict, including minorities’ citizenship and rights, Hassan said.

“Thus far, we have seen absolutely no attempt to do that, and it’s incredibly disappointing,” she noted. “The restrictions on humanitarian aid, the stopping of food aid and the inability to provide shelter services is the perfect storm for a humanitarian disaster.”

“It’s a very important day for Muslims. All of these people I saw coming across [the border] were Muslims, and I remember feeling particularly heartbroken, because it’s supposed to be a celebratory day for them,” Thapa told HuffPost from Bangladesh.

But for many refugees arriving in Bangladesh, the living conditions are still abysmal. “There’s no shelter for them. There’s nothing,” said Thapa. “They’re literally sitting by roadsides, hillsides and under trees and bushes. They have nothing. I mean, absolutely nothing.”

She believes Suu Kyi “has chosen to take the side of the majoritarian population” in Myanmar, which has an overwhelmingly Buddhist population. State media outlets in the country have been especially disparaging of Rohingya Muslims, reportedly referring to them as “morally bad” and “human fleas.”

“It’s very disappointing. I wish [Suu Kyi] would recognize that she is leader of everyone in the country, not just the majority,” said Thapa. “It’s time for her to show leadership and to call on security forces to stop these egregious violations, but she’s not showing any inclination to do so.”

But the crisis can be addressed, Hassan asserts. “There are solutions to these problems ― it takes the sort of moral courage and commitment to human rights that we would hope to see from leaders like Aung San Suu Kyi.”

This article has been updated with comment from Aung San Suu Kyi. 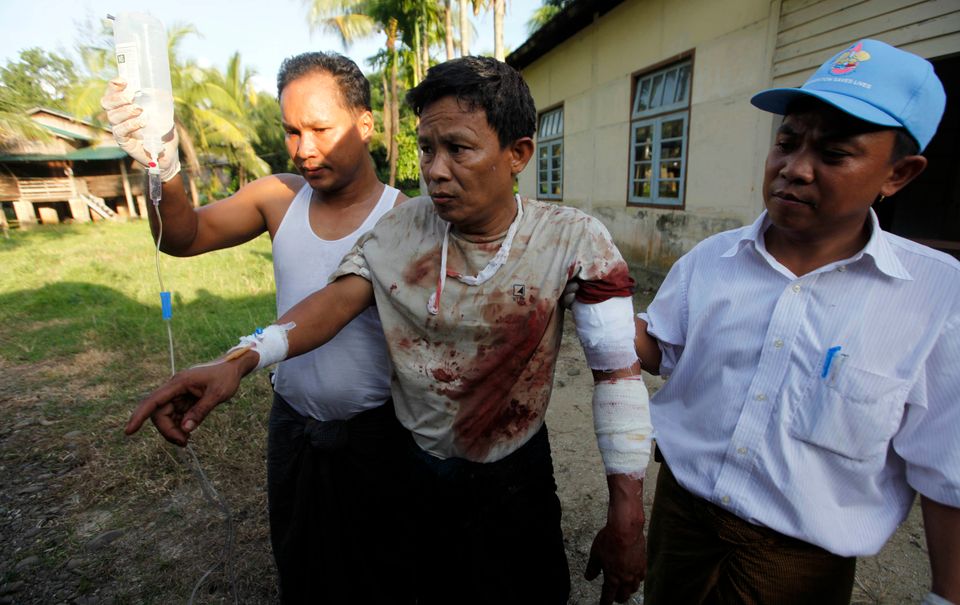