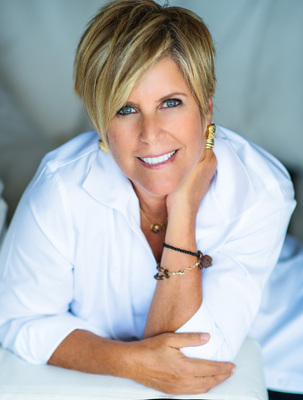 If you're like me, you probably know Suze Orman as a financial guru, author, motivational speaker, and television host. All that's impressive of course as she has helped millions make better financial decisions and smart investments. What I found equally as impressive though was something maybe you don't know about her. Suze had major speech problems as a kid that held her back. One difficulty was making a distinction between words such as "fear" and "fair" or "beer" and "bear." I too had the very same issue. To learn about Suze's struggle really resonated with me and motivated me to find out more about her and how she overcame great adversity to go on to become a big success.

Here's part of my interview with her:

JA: Suze, I was struck by your personal story dealing with your speech issues as a kid. I had a very similar problem, and actually still do to some extent. I also had difficulties in school to the point my 7th grade teacher phoned home to talk to my parents about the trouble I was having with writing. These early issues in part motivated me to write my book Be Fearless: Change Your Life in 28 Days and teach people how to get past their fear and move on to success. What's one thing you learned from your speech issue and early struggles that led you to be successful?

SO: I learned intent to speak clearly. Today if you listen to me speak you'll hear me enunciate every word extremely clearly. That purposed enunciation was part of how I was taught as a young child to get over my speech impediment. So now when people listen to me speak they hear what I say very clearly -- they understand what I say. I still to this day think about every word I choose to use. So in the end my speech impediment helped make me the great speaker that I have become.

JA: I maintain that our parents can be our greatest influence in life and can shape us and set us on a path towards success, or not. In your story, you talked about how your parents had a hard time with money while you were growing up. How did this impact you later in life?

SO: My father had emphysema. Every night I would hear him cough and struggle to breathe. However every morning after a sleepless night I would watch him go to work. No matter how sick he was he did not use that as an excuse to not work. I watched him struggle through one setback after another but again he never gave up. I watched my Mom do what had to be done to make sure there was enough money to pay the bills. In the 1950s she went back to work as a legal secretary and sold AVON on the side. She was the only Mom among my friends that worked. I saw how she escaped to work and how work added to her self-confidence and how work enhanced her. There was a saying in our house that an Orman never gives up.

So for me it impacted me by never saying no to anything that came my way. I would silently say to myself if my Dad could do it so can I. So there were months that I flew over 70,000 miles to appear anywhere and everywhere I was asked. I gave everything I had to accomplish that which was presented in front of me.

JA: You've had several defining moments and challenges in your life leading to your success as a financial advisor, author, motivational speaker and television host. Is there one significant mistake that you've learned from most?

SO: I learned that people love to build you up but many love even more to tear you down. I learned not to count on anyone to clear a path. The mistake I made was to believe everyone really wanted to help people and tell them the truth -- I learned that is not true.

SO: I would say thank you. In their own strange way their discouragement led to help making me the warrior I have become.

JA: It seems like you had a bit of luck/fate on your side, particularly when your friends and customers from the Buttercup Bakery loaned you over $50,000 to help you achieve your dream of owning a restaurant. How much do you think luck plays a role in success?

JA: You're a go getter and it seems when someone slams a door in your face you invent a new way to get through. This is consistent with my story and what I teach my clients: that by avoiding the very thing you fear, you give it more strength and make it into a big bad monster. Therefore, you should face fear rather than avoid it. Is this your way of dealing with fear? Do you have other advice for dealing with fear?

SO: The only way to silence fear is through action. As I wrote in The 9 Steps to Financial Freedom one needs to silence their fears. One way is to write down your greatest fear. Then write down a truth that is directly opposite that fear. So for example, if your fear is: "I will never have enough money." Your new truth would be, "I have more money than I will ever need."

JA: I know what it feels like as an expert to face critics. And also know how important it is to stick with what you believe in, even in the face of criticism and controversy. What would you say to your critics who have questioned your financial knowledge and expertise?

SO: I would again say thank you. Their lack of knowledge of who I really am just contributed to my resolve to go for it even more. Never forget the elephant keeps walking as the dogs keep barking.

JA: What factor has been the single biggest contributor to your success?

JA: Who do you admire most in life, and why?

SO: I admire those who against all odds never give up and never lose hope.

JA: What advice you would give to young people in America regarding finances and for achieving a dream?

SO: Never forget you define your money, your money will never define you. Always live below your means but within your needs. Only buy needs not wants. Get as much pleasure out of saving as you do spending.

For more tips on living a fearless life check out my book Be Fearless: Change Your Life in 28 Days.

Licensed psychotherapist, executive coach, columnist, and author of "Be Fearless: Change Your Life in 28 Days"