Welcome to Svalbard, a tiny little archipelago (a.k.a. island grouping) waaay off the coast of Norway. Svalbard is known to be an awesome place for polar bear spotting. 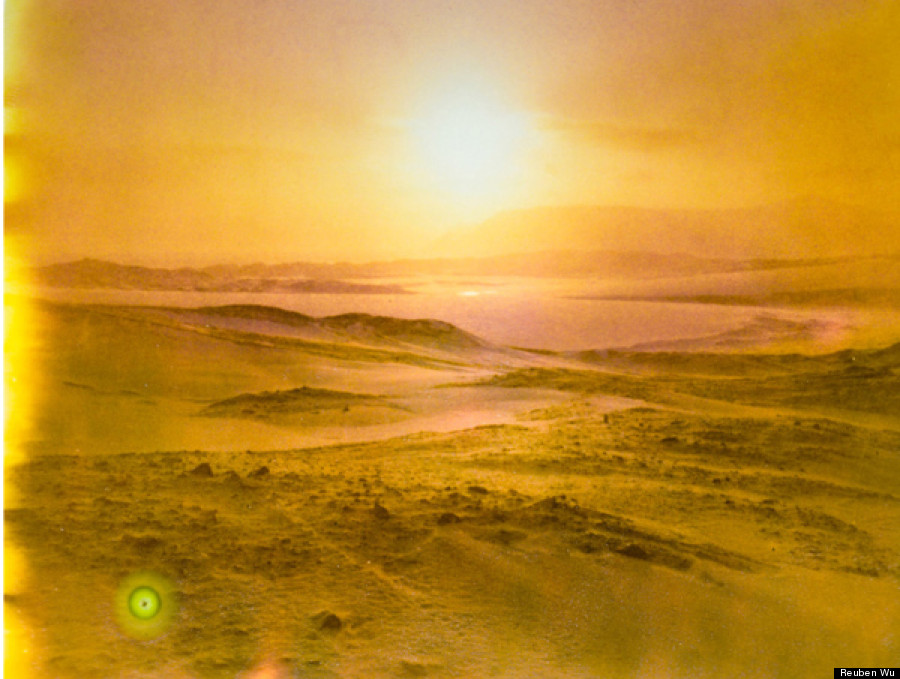 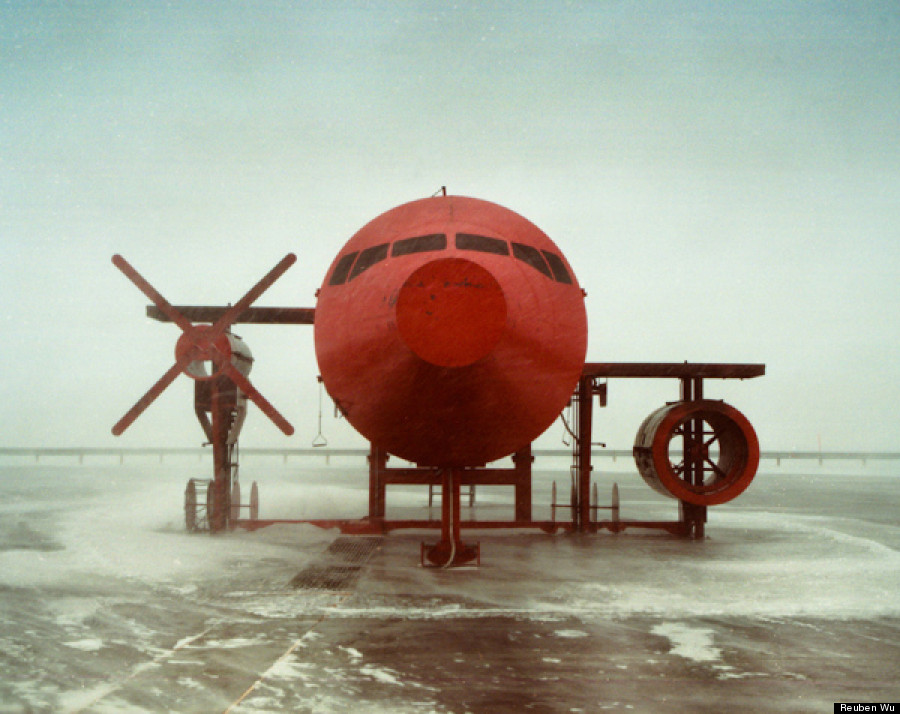 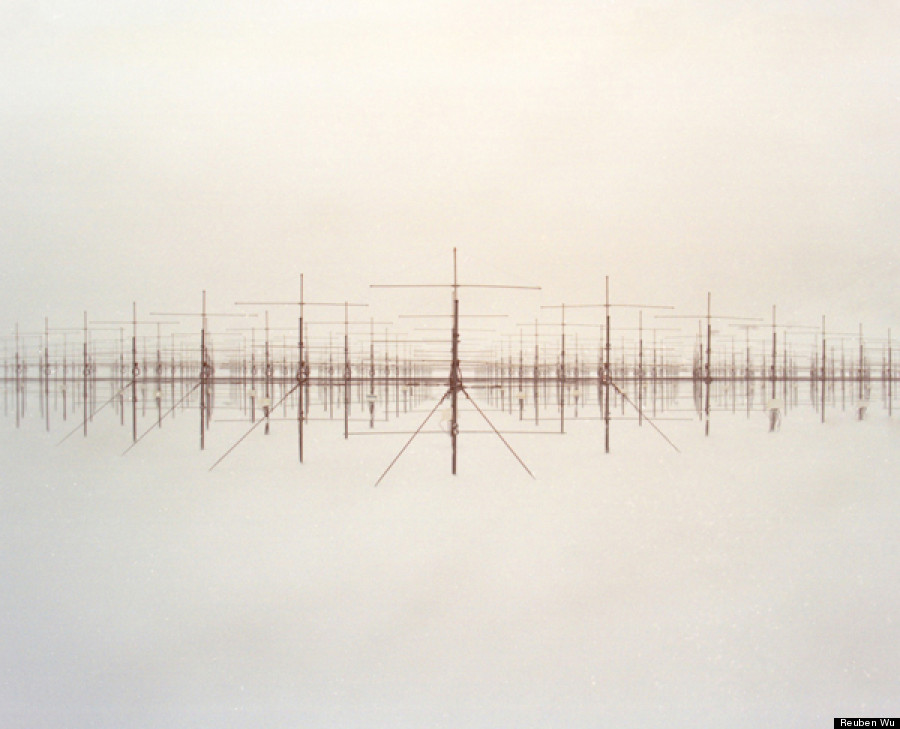 Photographer Reuben Wu took these shots in Svalbard a couple of years ago. He says of his trip:

"In February 2011 I spent a week on an archipelago close to the North Pole called Svalbard… We traveled mainly on snowmobile and slept in tiny huts which had to be strapped down to stop them from blowing away... I was interested in the sensory experience (nothing but snow, no trees, sun at sunset angle all day) and also the signs of humanity which appear to cling on for survival." 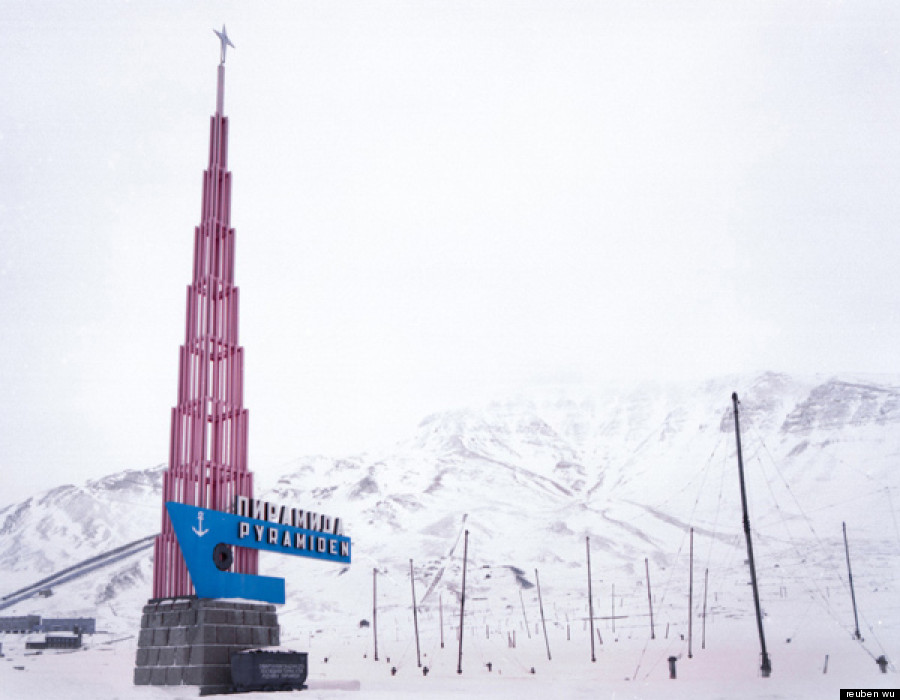 If you go to Svalbard, you can visit Pyramiden. Pyramiden is an old Soviet village that’s been abandoned for about 15 years. 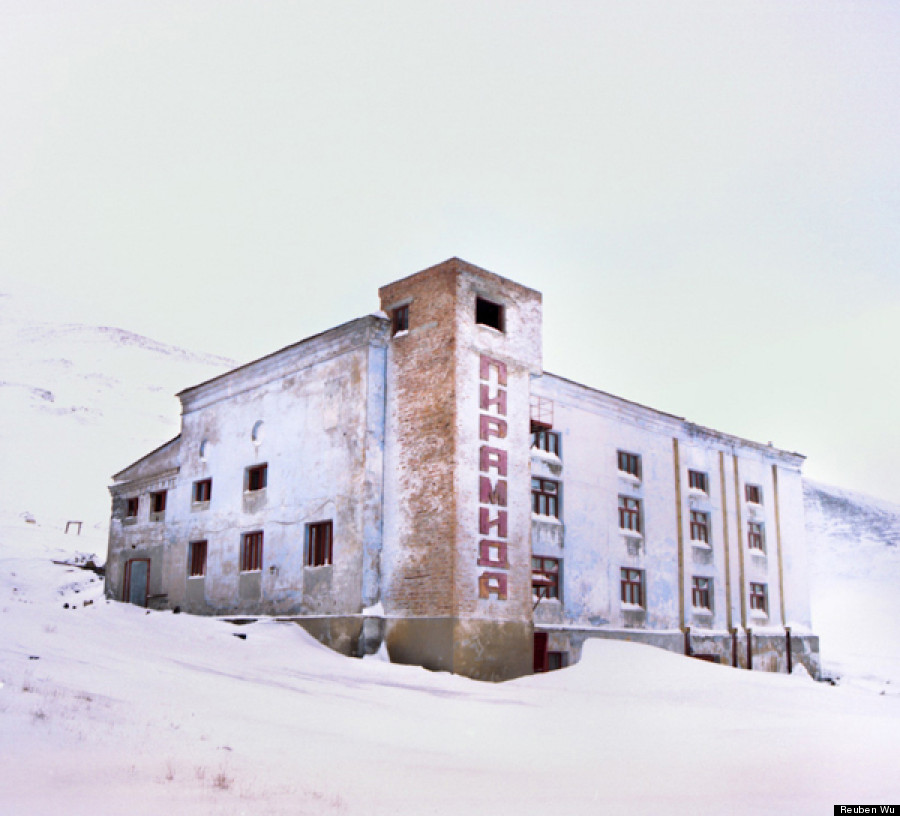 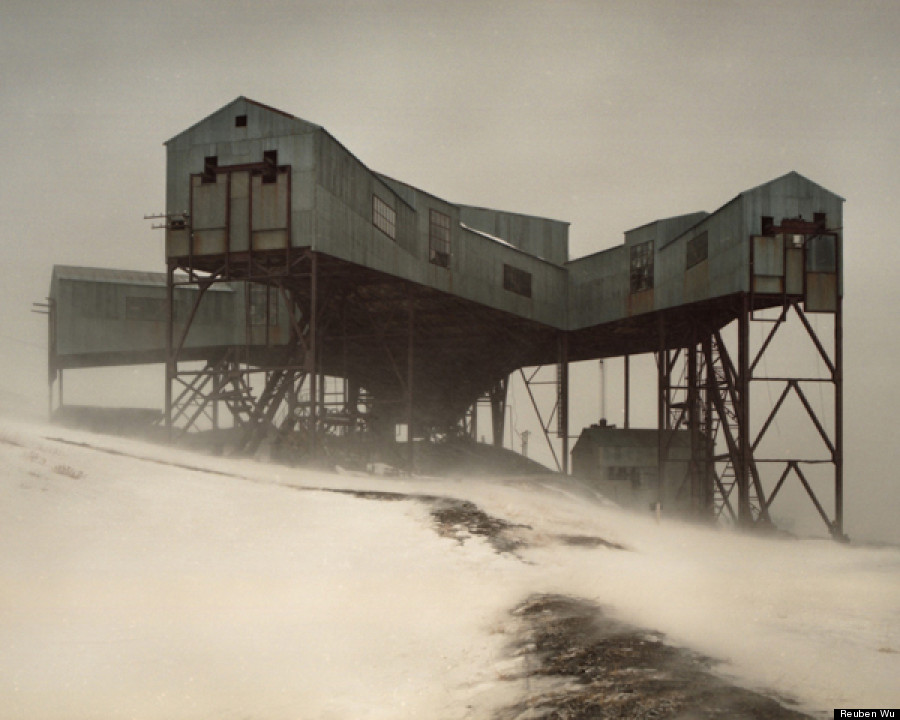 In the 1960s and 70s, about 1,000 people lived in this town and practiced the Communist way of life. Don’t worry if you can’t book your ticket yet-- researchers say that because it’s so cold in Svalbard, these buildings won’t decay for at least 500 years. 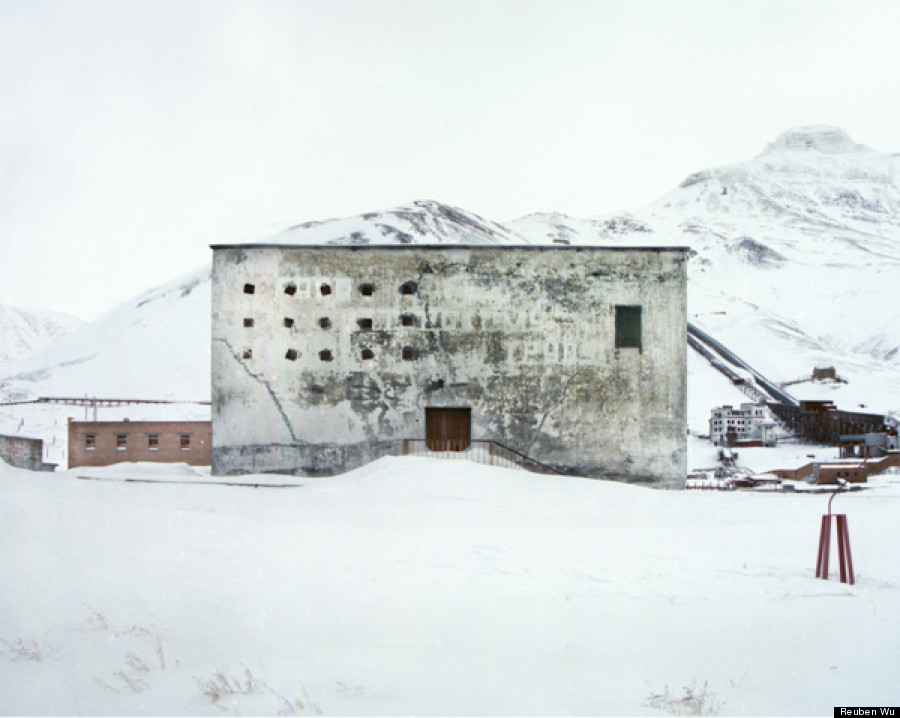 The Svalbard Global Seed Vault is a giant warehouse that has 4.5 million seed samples. If genetic banks lose seed samples, they can get replacements from the Seed Vault. And if anything major ever happens to the world’s crops, we could hypothetically use these seeds to repopulate our favorite plant species. 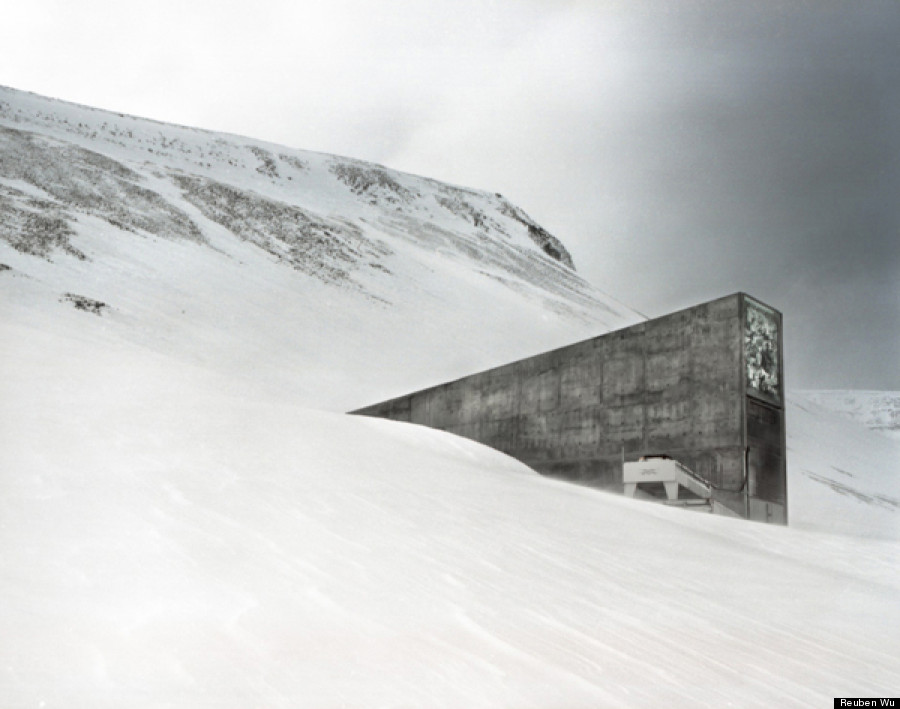 Finally, the Northern Lights perform an especially amazing show in Svalbard. They thank you for virtually visiting! 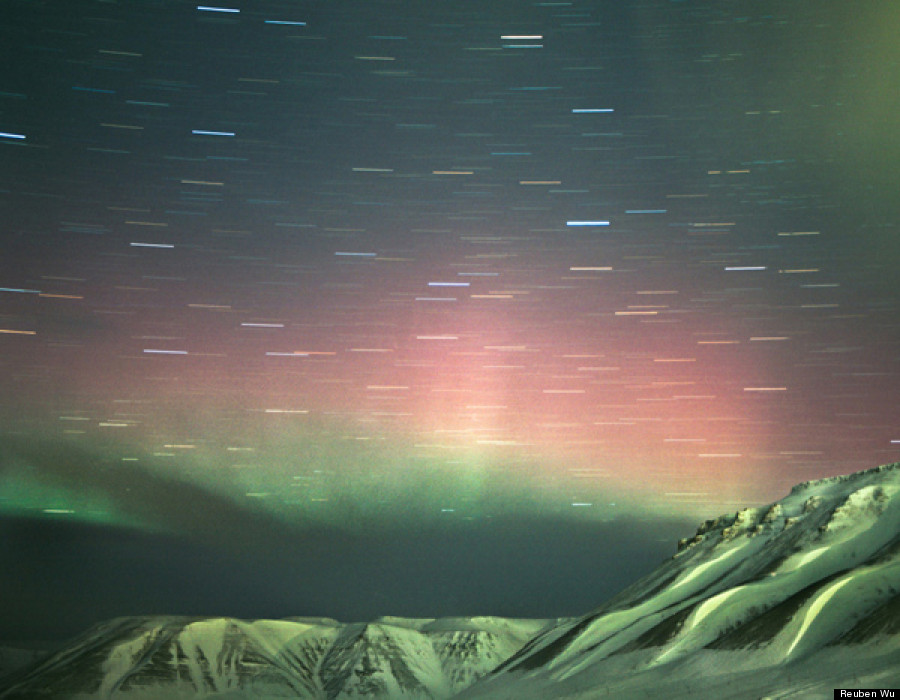 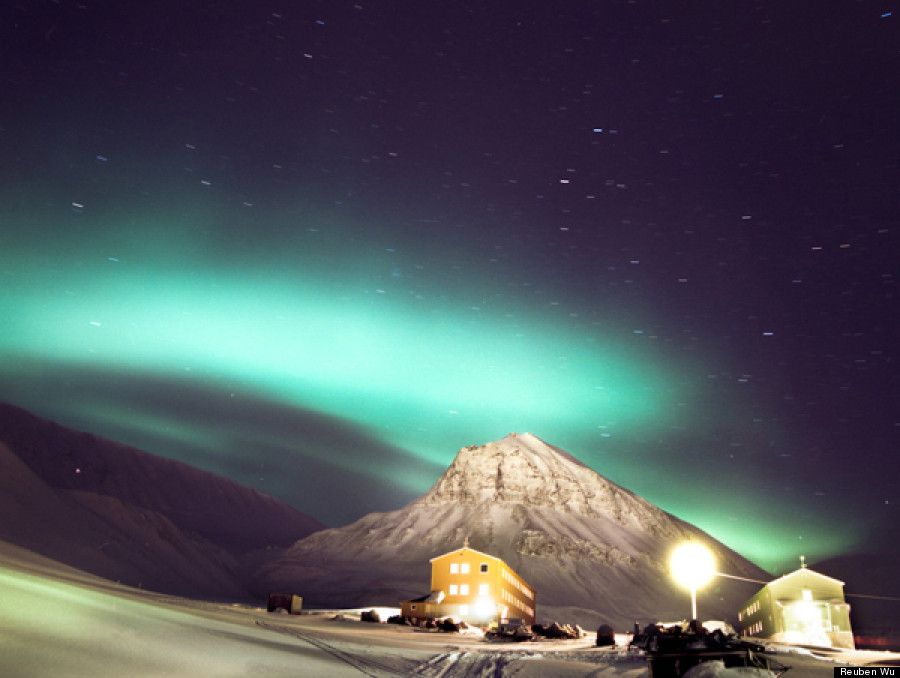 For more of Reuben Wu's photography, visit his website.

Why Go: Alaska's location within "the zone" means you're almost guaranteed to see spectacular light displays. Be sure to move further away from city lights of Fairbanks into the region's vast wilderness areas of Denali and the Yukon Territory.

Why Go: North of Scotland between the Norwegian Sea and the North Atlantic, the Faroe Island archipelago is mostly known for puffins and Viking folklore. While its stormy weather mimics that of the British Isles, visitors to this Denmark-owned province could also see the iridescent lights.

Best Viewing Locations: All islands within its archipelago

Plan Your Trip: Fodor's Denmark Travel Guide
3
Scotland: Watch the Sky for a Weather Break
Flickr: madmack66
An aurora with arcs in different shades of green

Why Go: The British isles are known for stormy, foggy, and cloudy weather--far from ideal conditions for observing the sky, but on those rare occasions when thick cloud covers break momentarily during dark winter months, you've got a good chance of witnessing the display in parts of Scotland's north.

Why Go: Areas around pristine Lake Superior in Ontario and Northern Canada's tundra back-country are prime viewing spots. Head to the town of Whitehorse within the Yukon Territory to best see the swirling lights. Sometimes, the glowing sky can be seen as far south as the American border, but stick to Canada's vast wilderness for your front row seats.

Plan Your Trip: Fodor's Canada Travel Guide
5
Greenland: Experience Great Auroras All Over
John KjÃ¦r/Greenland Tourism
Northern Lights are in Greenland all year but they can't be seen during summer's Midnight sun

Why Go: Greenland still remains a final frontier for the average traveler and from its interior ice remains optimal location, however more accessible areas south and east of Greenland provide just as good viewing opportunities. You can see northern lights from most parts of the country (similar to Iceland).

Why Go: Head to Luosto in Northern Finland to the Aurora Chalet where, upon arrival, you'll be handed an "Aurora Alarm" which beeps once Northern Lights appear. In the nearby town of Sodanklya, the Northern Lights Research Center relays your message via the hotel. On chilly cloudless nights, you're also bound to catch the lights shimmer in the skies over the town of Nellim, close to Lake Inari--Finland's third largest lake.

Why Go: Leave the bustling nightlife of the capital city and head out into the wide open plains of Þingvellir National Park--a UNESCO Heritage Site where the North American and Eurasian continental plates meet to cause a rift valley. Under clear dark skies on a freezing night in early March was where I first witnessed the lights dance across the Icelandic sky. Though the show only lasted for 12-15 minutes, it felt like an hour.

Why Go: The area around Abisko in Swedish Lapland is scientifically proven to be an ideal viewing spot due to a unique micro-climate. Close to Abisko National Park, the dark winter night is perfect for sky watching. The 70km (43mi) long lake helps create the infamous "blue hole of Abisko"--a patch of sky that remains clear regardless of the surrounding weather patterns.

Why Go: In Northern Russia, you've got a good chance of seeing Aurora Borealis. The Kola Peninsula's proximity to the Northern Lights zone also makes it a key area and the town of Murmansk is a popular base . . . if you can handle the below freezing temperatures of a typical Siberian winter.

Why Go: The northern town of Tromsø teems with Aurora Borealis activity when those extended summer days are long gone. Its location above the Arctic Circle, and within the Northern Lights zone, makes it one of the top places to view shimmering green lights. The town also boasts the world's most northerly university, brewery, and planetarium. You can cruise Norway's fjord-lined coast aboard a Hurtigruten ship and get wake-up calls to head out on the deck when the lights appear.