Many cat owners are obsessive about their feline friends, but few have immortalized their pets quite like artist Svetlana Petrova. The Russian painter has become an Internet sensation after she placed her cat, Zarathustra, in popular classic paintings, which are now displayed in a gallery in Abingdon, England. Petrova joined HuffPost Live to talk about her art and her famous fat cat.

Petrova explained that her inspiration for this series came after her mother's death.

"That's my mother's cat. My mother died in 2008, and she left me this cat, which she adored. So she spoiled him, that's why he's fat. and now he can't lose his weight. And I got bad depression after her death, and I couldn't work in art anymore," she revealed to host Ahmed Shihab-Eldin. "But then, when my friend told me, 'Why you don't make an art project with your new cat? He's so funny,' I thought maybe I'd make a still life with him, like in a style of Dutch paintings, with food. By chance, I inserted him in another painting that I began."

Her website gallery includes paintings from various eras: ancient Egypt, the Italian Renaissance, the Dutch Masters of the 17th century, 18th-century French masterpieces and famous 19th-century American and Russian works. But whether it's Rembrandt, Titian, da Vinci or Whistler, all feature Zarathustra.

Petrova admitted that she knew her work would likely end up in an exhibition."I'm a professional artist, and I was fond of Internet memes, and I thought maybe I can make an Internet meme who would at the same time [be] a work of art. And I did this." 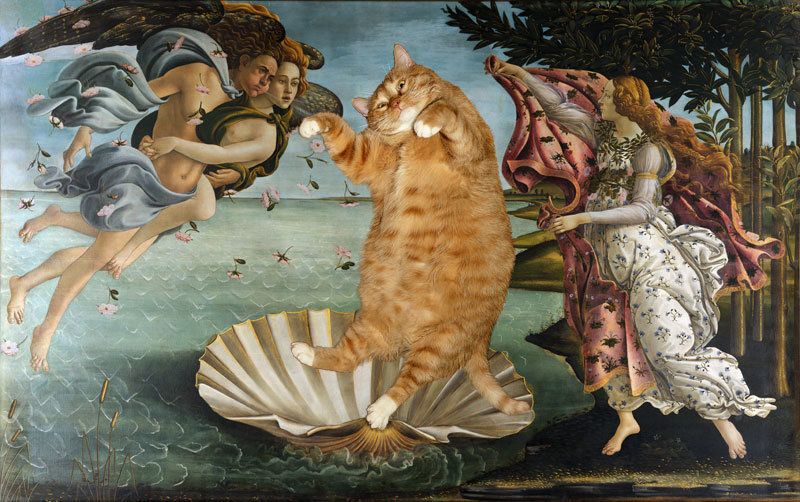