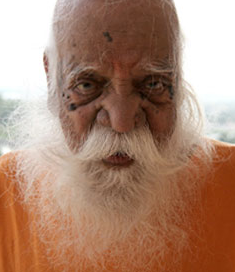 The last time I saw my yoga teacher, Swami Buaji, was six years ago. At the time, he was said to be 116 years old, living proof that a lifetime of yoga has its rewards.

One of the world's oldest living yogis and originally from Tamil Nadu, India, Swami Buaji would shuffle to the door of his New York City apartment living room which doubled as a yoga studio. It seemed an oxymoron that his windows faced out on the Time Warner complex, but he'd been living there since 1969, when he first came from India.

Five feet tall, with flowing white hair, a mustache and a bushy white beard, Swami Bua looked like a very thin Santa Claus. He had the same gleaming eyes, deep belly laugh, and the same generosity as Santa -- except Swami' Bua's presents were not material -- they were gifts to the soul.

"Look at me!" he'd say in his singsong accent as he rolled up the sleeve of his orange dhoti, flexed his bicep, and pounded on his rock-hard chest. "Do I look weak?" A former boxer, wrestler, and man who once ran 75 miles without stopping, Swami Bua had perfect vision, was anatomically no more than 40 years old, and was in excellent health.

"Do it nicely," he'd say before each class. To his students, Swami Buaji was much more than a yoga teacher -- he was a guru, father, mentor, and friend. But like all good teachers, Swami insisted everyone do the postures perfectly; he didn't want anyone to be injured. "Bend from the lumbar, the lumbar!" he would admonish. Or, to a new student, "Do not beeend your nick."

The student would looks at him blankly.

"Your nick! Your nick!" Swami would repeat, frustrated.

The student would still look confused.

"No no no, my dear. Do you not speak Eeenglish?" Swami would say.

"Neck," someone would whisper to the new student. "Don't bend your neck. He wants you to keep it in line with your spine."

But while a perfectionist, he was also a gentle, loving teacher. If someone was struggling with an asana, he'd say, "Do not force it. Do only what you can." Or, excited that a student had finally achieved a difficult posture, he'd say, "I will turn your body into a rattlesnake."

Born in 1888 in Tamil, India, Swami Buaji insisted that because of yoga, he'd never been sick a day of his life. He wouldn't tell us how old he was, but people who'd studied with him for years said he was 116. Many yoga practitioners in America have branded or modified yoga to make it easier and more appealing, but Swami Bua refused to change or commercialize the practice. He never advertised, and his students discovered him only through workshops and word of mouth.

The youngest of sixteen siblings, Swami Buaji was born severely crippled and sick. Shortly after his tenth birthday, a doctor declared him dead and his parents carried him to the funeral pyre; but when the flames were lit, his body started to shake. Everyone ran away, spooked, except a sadhu named Yogeshwara who carried Bua back to his ashram, gave him Himalayan herbs, and healed him by teaching him yoga.

By the time he was 13, Bua regained his health and had become so proficient in yoga that his guru told him to teach others. Buaji left the ashram and traveled to Delhi where he took on a government job as Director of Health and Science. In this position, he introduced yoga into the public school system and established a number of yoga institutes in various Indian cities. For implementing these programs, Indiru Gandhi presented him with a special award.

As he continued to teach, his reputation spread, and he was invited as the royal guest of the Shah of Iran to teach him yoga. Buaji stayed five years. He next participated in international yoga conferences and met Albert Einstein, Mahatma Ghandi, and George Bernard Shaw. He also taught Muhammad Ali how to meditate.

At the end of class, none of us wanted to leave. We'd sit at Swami Buaji's feet and listen as he told us how he was almost bitten by three Cobras and had to kill them all; or how he was kidnapped by naked Aborigines in India and held captive. On the 19th day they wanted to eat him, but one of his guards, a young woman, was in love with his long hair, and helped him to escape.