Across the nation, anti-Semitic bias cases have been capturing news headlines. Last month, two men from Farmington, New Mexico were sentenced to time in federal prison for branding a swastika on the arm of a Navajo man who suffers from mental disabilities. Swastikas were found graffitied on storefronts and homes across the New York metropolitan area, and a teenager has been charged with throwing Molotov cocktails at a synagogue in New Jersey, igniting a fire in the residence of the rabbi and his family.

The recent rash in anti-Semitic incidents prompted many leaders to talk about the need to "speak up and condemn these vulgar crimes" and to "respond forcefully." But how do you respond to bias when you're with your young child, and the crime is in your own neighborhood? 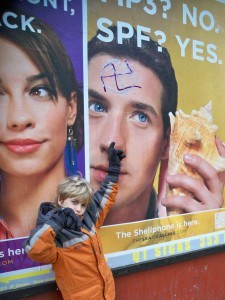 I was recently faced with this question while walking with my eight-year-old son down a street near our home in downtown Manhattan. He was the first to spot it -- a purple swastika scrawled across the forehead of a man on a billboard advertising a cruise line.

"Isn't that a swastika?" he demanded, pointing.

"Yes -- it definitely is," I answered. "Where have you seen one before?"

"Raiders of the Lost Ark," he said, staring up at the graffiti.

I was quickly taking in the complexities of the situation and what to say next when he said sadly, "The person who did that hates me, and he doesn't even know me."

You don't have to be raising a Jewish child to understand the heartbreak in those words. As I took his hand and we continued on our way home, I told him a somewhat disjointed story about my own understanding of the swastika and what it stands for.

I told him about how confused I felt when I first saw an ancient swastika carved on a temple in Thailand in my post-college backpacking days. And how the symbol, which originally had a positive, sacred meaning in Hindu, Buddhist and other traditions, was turned on its side (literally) by the Nazis and became a mark of Aryan supremacy.

This led to a discussion of Hitler's view of a master race, which is pretty tough to explain to a blonde-haired, blue-eyed Jewish child (a friend fondly refers to him as "the Jewish Viking"). I was careful not to alarm him, but I wanted to be accurate and honest.

I am admittedly not an historian nor an expert on current day hate symbols, but we seldom wear our professional hats when talking to our children anyhow. What I began to see was that he needed to have a of sense of control over what he had just seen. My telling him I was going to call the City's 311 hotline to report it wasn't going to be enough.

"So what do you want to do about the swastika?" I asked.

"Let's get a can of black spray paint and cover it over," he suggested.

"That might feel good," I said. "But wouldn't we be destroying something that doesn't belong to us?"

"We could put something good over it," he said thoughtfully.

I couldn't imagine what that could be, but listened anyhow. Sometimes a child's internal compass points them to their own true north, and it's best for us adults to get out of their way. Armed with colored paper and markers, he came up with this... 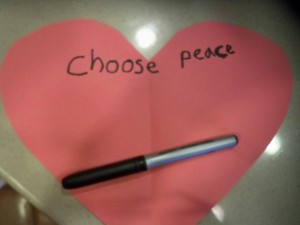 Which I lifted him up to tape on the billboard the following day... 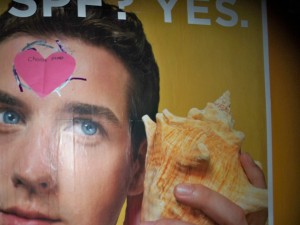 Clearly this is just a beginning. Anti-Semitic acts will not vanish over night, and our conversations and responses will evolve with each passing day. But the important thing is to keeping talking and to always, always respond.

The Anti-Defamation League has an on-line resource called Discussing Hate and Violence with your Children which includes advice from Dr. Donald J. Cohen, Director of Yale Child Study Center and Professor of Child Psychiatry, Pediatrics and Psychology at Yale University.