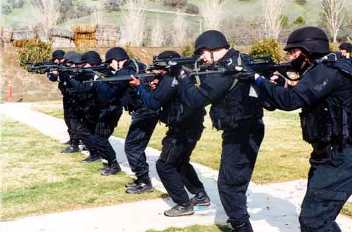 May was a bad month for SWAT. In Columbia, Missouri, a video of the SWAT team killing a dog in the presence of the Whitworth family's seven-year old provoked sustained local outrage and went viral on YouTube. In Polk County, Georgia, a County/DEA team after two years surveillance hit the wrong address, causing 76-year old Helen Pruett to havea heart attack. In Detroit, a SWAT team accompanied by a reality TV show crew, killed seven-year old Aiyana Jones as she slept on a couch. If police accounts are accurate, an officer and Aiyana's grandmother came into contact in the confusion of the raid and flashbang grenade detonations, and the officer's gun accidentally discharged. Police were after a murder suspect (he wasn't there) but had passed up the opportunity to arrest him earlier outside.

SWAT was created for the most dangerous situations -- hostages, snipers, barricaded suspects. 1980 saw fewer than 3,000 SWAT raids; but today, SWAT is deployed more than 50,000 times annually, mostly in routine drug enforcement. The proliferation of this aggressive, militarized tactic has seen a steady drumbeat of heart attacks, fires, and killings resulting directly from it. Compared with the total number of SWAT raids, killings of humans in them are infrequent. But every SWAT raid inflicts a trauma the people inside a home may never fully recover from, and carries the risk of such tragedy.

SWAT proponents disagree. Drug suspects are often armed, they point out, and surprise can allow officers to secure things quickly. Columbia Deputy Sheriff Tom Dresner told the Columbia Daily-Tribune, "As counter-intuitive as it seems, SWAT is the safest way we have come up with in American policing to guarantee the safety of all involved." In a different interview, Dresner cited proponents' other primary argument, preserving evidence for prosecution that suspects might otherwise be able to dispose of. "If we were searching for stolen televisions in [Whitworth's] house, there is no reason for SWAT. He can't flush televisions."

Both arguments fail scrutiny. While drug suspects are often armed, numbers fail to support drugs being an especially dangerous area of policing. Despite 1.5 million drug arrests per year, officer fatality reports compiled by FBI and police memorial groups find an average of 4.3 officers killed annually in drug enforcement in the past decade. Drug arrests led to officer deaths fewer than one in 350,000 times -- 2008 saw seven, 2009 none. This is an admittedly surprising finding, but consistent over many years. Drug dealers are in it for the money, and don't seem to include prosecution for killing a police officer in their life plans.

The warrant allowing officers to search Whitworth's home cited a "large" quantity of marijuana. A "large" amount of marijuana also can't be flushed away in the time needed to conduct a search conventionally. This is true even for more compact substances like cocaine or heroin.

But what if evidence were lost, prosecution foiled, drugs hidden and later sold? Would it make a difference? Decades of drug-fighting demonstrates no. Supply-side enforcement sets out to reduce the drug supply, to drive up price and reduce demand. But prices have dropped -- cocaine costs less than a fifth than in 1980, for example. Traffickers expect to lose supply, and plan for it, and dealers get replaced.

Tragically, two of 2008's fatalities suggest the opposite point of view to Dresner's -- SWAT tactics place officers' lives in dangers not otherwise existing. In Chesapeake, Virginia, Ryan Frederick, in fear for his life when his home was taken by storm, fired through a door, killing SWAT team member Officer Jarrod Shivers. In Pennsylvania, FBI Agent Samuel Steele Hicks was killed by a wife's suspect, who fired blindly at the sudden intruders whose nature she did not know. Shivers and Hicks would be alive if police had served the warrants conventionally. Clearly the dogs CPD SWAT was so quick to fire on would not have gotten so excited without the dynamic entry.

SWAT proponents are undoubtedly sincere in their beliefs. But a closer look suggests SWAT's proliferation has more to do with the influence of federal funding, and with the militaristic climate of the drug war, with the justifications coming later. Grants and equipment giveaways help an agency start a SWAT team. SWAT officers then want something to do, and police chiefs want something to show to justify further funding. The result is something dangerous, abusive, and unjust, with the failing drug prohibition no justification.

Community leaders may indeed want to have SWAT available in case it should ever be needed. But they should hope that it's never needed. With only rare and specially-purposed exceptions, SWAT should be limited to true emergency situations.