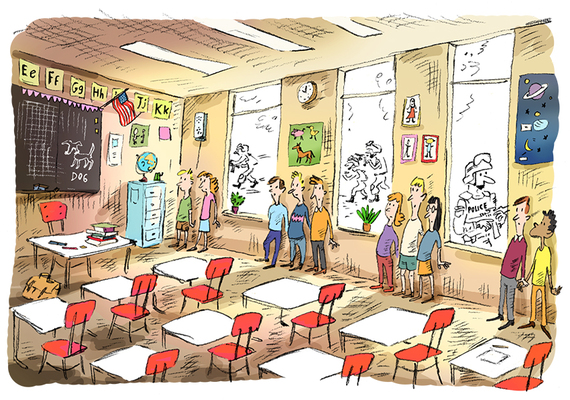 Last week our local elementary school received a disturbing phone call. In a pre-recorded voice, the speaker said that he was armed and preparing to attack the school.

The local SWAT team was on the scene almost before the call ended. In Holland, we have SWAT teams, too -- Special Weapons and Tactics -- but they are more familiar here, thanks to Ferguson and now Baltimore. Soon they were swarming around the school -- squads of men in military fatigues, black helmets, goggles, radios, and carrying rifles and assault weapons. Over the loudspeaker crackled the command: Shelter-in-Place! Within seconds, the kids were carrying out what they had learned in many safety drills. They stood with their backs against the outside walls, out of sight from the windows. Teachers closed the doors and windows and shut off the lights. The school looked empty.

It says something about our times that we are learning a strange new vocabulary to describe threats we can barely grasp. While the little kids huddled in Shelter-in-Place, my kids at their nearby schools were told: Closed Campus. That meant that no one could enter or leave the premises. Via text messages on their cell phones, they quickly realized that this was not a drill -- they were threatened by an Active Shooter.

Two hours later I received the following email message from the principal: "Dear parents, this morning we received a report that an armed individual threatened our children. Police have investigated and suspects that it is a 'swatting' hoax. Someone sends a message to an institution with a false message that there is a serious threat, so the SWAT team goes into action. Our school has followed all the correct procedures according to the protocol of the police. We want to thank the police and staff for their adequate response to events. We all worked together to ensure the safety of your child. The police will continue to be alert in the neighborhood, but you can be assured that we continue the day in a calm and productive learning environment. "

I was hardly reassured. It had the same chilling effect on me as the first scenes of the propaganda film, Duck and Cover. It was released in 1951 by American Federal Civil Defense Administration, in consultation with Security Committee of the National Education Association. Maybe you've seen it. It begins with a cartoon of a turtle named Bert cheerfully walking down a street. A monkey is dangling a firecracker with a smoking fuse above his head. It explodes, but Bert has already ducked and covered in his shell. Bert nothing will happen, because he knows that he only needs to listen to the government. What applies to Bert, as the narrator explains, applies to us all. We are safe as long as we listen to the instructions provided over all the telephones. The kids of the 1950s did not have to worry about nuclear explosions, it seems, since the instruction to Duck and Cover would protect them. All the children would have to do is crouch under their desks with their hands above the heads. Duck and Cover would have to protect them from a nuclear bomb.

Today my kids learn to deal with equally senseless attacks and murderous individuals. Once again, the vocabulary of measurement is dusted off. They practice the difference between Code Red, Code Green, and Code Yellow, and the instructions Lockdown, Closedown, Closed Campus and Shelter-in-Place. We wrap them in a warm blanket of nouns to protect them from danger, like chanting magical spells.

That night I lie awake. I see images floating in front of me of the Sandy Hook Elementary School in Newtown, CT where in 2012 an armed man invaded and within five minutes shot dead 26 people. The Lockdown procedure the kids had practiced the week before tragically worked in favor of the killer. They were caught in a trap.