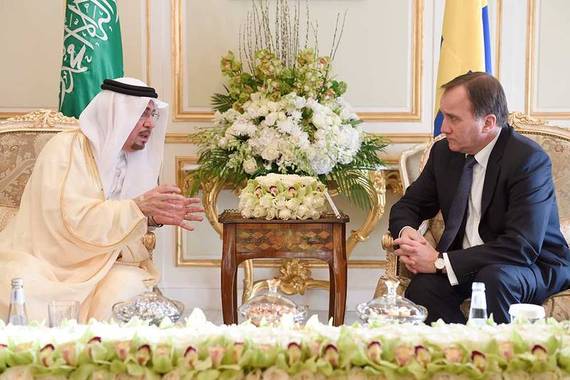 *Swedish media tends to criticize the Swedish-Saudi relation denouncing Sweden's desire to be an ally to Saudi and pointing out that it is a dictatorship that lacks any free political life and a country that commits massive human rights violations. But it is time to update that perspective: Saudis' record in human rights violations have exceeded its borders.

Ahead Swedish Prime Minister Stefan Löfven's visit to Saudi at the end of last month, Wikileaks tweeted that top Swedish arms dealer Marcus Wallenberg "accompanied" Swedish PM Löfven to Saudi. This is plausible as Saudi is one of the top clients of Sweden's weaponry industry. In its 2016 report, Control Arms Coalition named Sweden as one of the countries having reported licenses and sales to Saudi Arabia in 2015. Saudi won't obtain all these weaponry unless there is a flourishing market. Saudi is the world's third-largest spender in military expenditure index. Despite that Sweden has announced last year its military cooperation with Saudi was not renewed, Saab remains able to continue selling arms to Gulf countries - which are active actors in the ongoing conflict in Yemen.

The Saudi-led coalition intervention in impoverished Yemen that began in March 2015 was only possible because of the high level of arms imports made to the coalition 10 Arab state members, headed by oil-rich Saudi. In 2011-15 Saudi Arabia's arms imports increased by 275 percent compared with 2006-10. In the course of Yemen war, at least 10,000 people have been killed and the UN reported that the Saudi-led coalition is responsible for most civilian casualties. Human rights groups which include Human Rights Watch and Amnesty International have both documented dozens of unlawful coalition airstrikes, some of which may amount to war crimes. Schools, hospitals, weddings, funerals among many other civilian targets were not exempted from the coalition airstrikes.

In parallel, calls for countries to stop selling weapons to Saudi are raised. The calls include Sweden who had little or nothing to state in condemning the atrocities in Yemen. I became well-aware of Sweden's indifference when Sana'a funeral attack happened in which 140 people were killed and over 500 were injured by a double-tap airstrike by the Saudi-led coalition earlier this month. Sweden's foreign minister, Margot Wallström showed no condemnation statement, whatsoever, while she usually rushes to condemn terrorist attacks elsewhere. Seemingly, Sweden's silence over the Saudis' war in Yemen is relevant to Sweden's arms sales to the kingdom.

Last year, Sweden had a strong stance against Saudi over its terrible human rights violations record, then why the silence today? What has changed now? Why the silence over Saudi's role in the suffering in Yemen? Sweden's revival of the Saudi-Swedish ties comes as a step into Swedish preparation for its seat on the UN Security Council in the beginning of next year and with that Sweden seems to be willing to compromise & ally itself with the Saudis. Sweden had to re-establish its good relation to the Saudis and gain Saudis' support in the council.

In that seat, Sweden actually is becoming increasingly relevant to peace in Yemen - it must honor the international laws and exert efforts to ensure peace; which both Saudi is violating in the war in Yemen. However, Sweden's indifference over the potential use of its weapons in causing the suffering in Yemen undermines Sweden's future role in ensuring peace. If Sweden doesn't condemn Saudi war crimes now, then when will it do so?

It is time to refresh our view on the problem with Sweden allying Saudi considering Saudi's war crimes record in Yemen war and therefore call upon that Sweden suspend any of its arms sales to Saudi- unless, Sweden would like to be on the wrong side of history.