STOCKHOLM -- In the summer of 1938, at the initiative of U.S. President Franklin D. Roosevelt, 32 nations convened in the beautiful French resort of Evian to agree on a common refugee program to save the desperate Jews of Germany and Austria. After nine days of deliberation they agreed on nothing of the sort. Instead, they all went home and for all practical purposes closed their borders. One of the nations doing so was Sweden, even begging Nazi Germany to stamp the passports of Jews with a large "J" in red, to facilitate the process of weeding them out.

Even as war broke out and Germany sealed its borders and the number of Jews knocking on the doors of Sweden trickled down to a few hundred, the doors largely remained closed. Only in October of 1943, when the winds of war had turned, and 7,000 Danish Jews were shipped across the straits of Öresund to knock on the doors of their neutral Swedish neighbors, were they to open. And this time generously so.

And so they did again in the summer of 1945, when Sweden agreed to offer temporary refuge to some 30,000 survivors of the Nazi concentration camps, among them a young man who had survived Auschwitz and who was to be my father.

This turned out to be a new beginning not only for my father but for Sweden as well. Within a few years, a country deeply averse to foreigners was transforming into a country actively recruiting them for work in its booming industries. In the 1970s a policy of active labor immigration was replaced by a welcoming refugee policy, and by the early 1990s Sweden had more foreign-born inhabitants per capita than the United States and most European countries.

Today almost every sixth inhabitant of Sweden is foreign-born, a majority of them having arrived as asylum seekers or as part of Sweden's program for family reunion.

Today almost every sixth inhabitant of Sweden is foreign-born, a majority of them having arrived as asylum seekers or as part of Sweden's program for family reunion. This year alone the Swedish Migration Agency is bracing for up to 100,000 asylum seekers, mostly from Syria, amounting to almost one percent of the total Swedish population.

In the wake of the U.S.-led war on Iraq in 2003, the small town in which my father settled and where I grew up, Södertälje, received considerably more refugees from Iraq in total numbers than did the United States as a whole.

"We did not start the war in Iraq, however we assume a huge responsibility for those people who are affected," the mayor of Södertälje at the time, Anders Lago, tersely remarked in a rare address to the U.S. Congress in April 2008.

In the town where once I was the rare dark head on the block, more than half of the population now originates from Christian communities in the Middle East, with every third inhabitant being foreign-born, many of them seeing Södertälje as the cultural capital of a diasporic Assyrian/Syrian nation, arguably making my hometown a somewhat spectacular case in what so far has been an exceptional nation when it comes to receiving and settling refugees. At least, no other nation in Europe comes even close to Sweden in refugees per capita -- that is, relative to the size of its small population. It has taken more than twice as many as, Switzerland, four times more than Denmark and Germany, five times more than France, 25 (!) times more than United States.

If the EU as a whole, with a population 50 times that of Sweden, had received refugees in Swedish proportions it would certainly have made a difference.

Or more specifically, if the number of asylum applications approved by Sweden in 2014, exactly 31,220, had been proportionally extrapolated to the EU as a whole, the total number of settled refugees that year would have exceeded a million, to be compared with the actual figure of 183,365, to which Sweden contributed nearly a fifth while several member states contributed near to nothing.

This is not to say that a "Swedish" proportion of refugees is possible or even desirable on a EU-scale, only to say that in a situation when Europe is facing its worst refugee crisis in our era, with millions of people fleeing war and persecution in the Middle East and Africa, it might be worth contemplating what has so far made the difference between, let's say, Sweden and Denmark.

Let me suggest that it might have something to do with how nations view themselves and what they take pride in being seen as. I will not venture into the national psyche of Denmark, but I would argue that post-war Sweden during 44 years of uninterrupted Social Democratic dominance, not having been at war since 1814, had come to pride itself of being a model society based on universal tenets of social justice and human rationality. A national narrative based on memories of a distant past was effectively replaced by a narrative based on memories of an ongoing success story. Similarly, the moral ambiguities of Sweden's neutral position during the war were happily subdued by a sense of moral clarity in neutral Sweden's positions after the war, offering a "third way" between Soviet communism and U.S. capitalism, supporting anti-colonial movements in the "third world," happily touting the universal applicability of the Swedish model, generously opening its doors to the persecuted and oppressed.

Since then, the world has changed and with it the political and economic preconditions for Sweden's exceptionalism. Instead of the world becoming more Swedish, Sweden is rapidly becoming more like the world.

With one conspicuous exception, the refugees.

There is little reason to believe that this exception will last. Not when anti-refugee parties are having their day all over Europe.

There is little reason to believe that this exception will last. Not when anti-refugee parties are having their day all over Europe. Not when such a party has become the third largest in Sweden. Not when even a modest redistribution of some 40,000 refugees among the member states of EU cannot be agreed upon.

A beginning of sorts would perhaps be for European leaders to remind themselves and their nations of Evian 1938.

Although not every nation might share the peculiar "moral" self-image of Sweden, every nation ought to remember that a Europe that was once unable or unwilling to shoulder and share its human responsibilities and legal obligations towards those seeking its protection, soon became a Europe unable to prevent its own moral and political self-degradation and self-destruction.

By sleepwalking towards Evian all over again, Europeans should at least know that this is what they are doing -- and make a consorted effort to wake up.

© Goran Rosenberg. This article was first published in Granta. 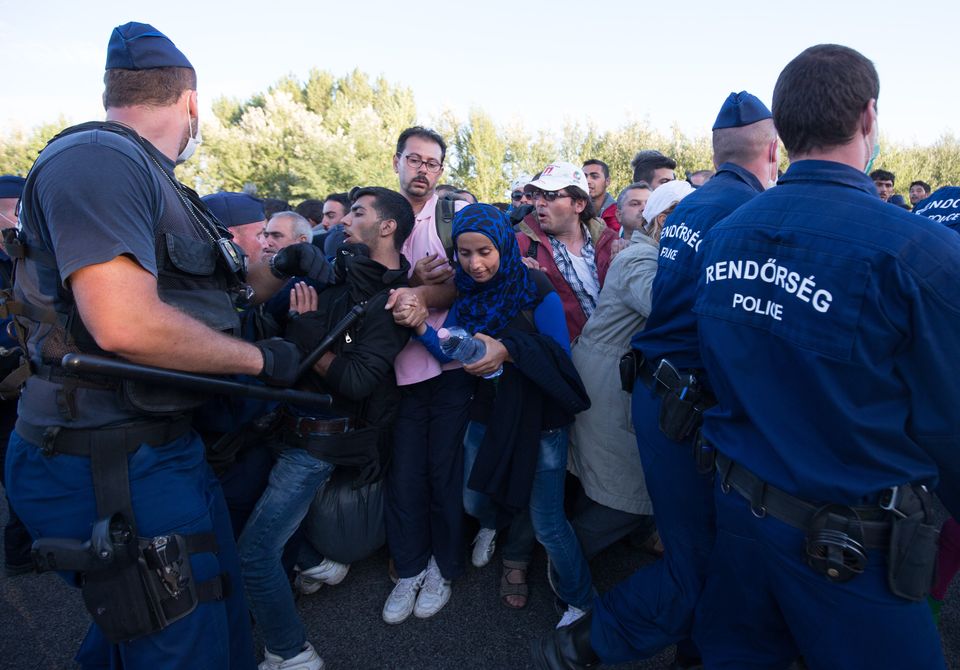 1 / 20
Migrants Continue To Arrive In Hungary
BUDAPEST, HUNGARY - SEPTEMBER 07: Police try to hold back migrants who have refused to travel to the Roszke registration centre and have ran onto the nearby motorway on September 7, 2015 in Roszke, Hungary. As the migrant crisis in Europe continues, an estimated 18000 people arrived in Germany over the weekend and thousands more are following in their wake along the Balkan route. (Photo by Matt Cardy/Getty Images)
Matt Cardy via Getty Images