President Donald Trump seemed to suggest to his supporters at a rally on Saturday that something horrible had happened the previous night in Sweden, when no such incident had occurred.

Swedish media, along with many online, mocked Trump’s misleading statement. Former Prime Minister Carl Bildt asked “What has he been smoking?” in a post on Twitter, while others ridiculed the speech using the hashtag “#LastNightInSweden.”

But even before the president made a vague reference to an awful event in Sweden, the Nordic country had an avid dislike for Trump. A Pew Research Center survey released during the U.S. presidential election campaign last year showed that 92 percent of Swedes had little to no confidence in Trump to “do the right thing regarding world affairs,” a higher number than in any other nation polled.

The June 2016 survey looked at attitudes toward the presidential candidates in 10 countries across Europe, as well as four Asia-Pacific nations and Canada. Although support for Trump was low across the board, Sweden edged out other countries, including the Netherlands and Germany, to hold the highest percentage of “no confidence” respondents. 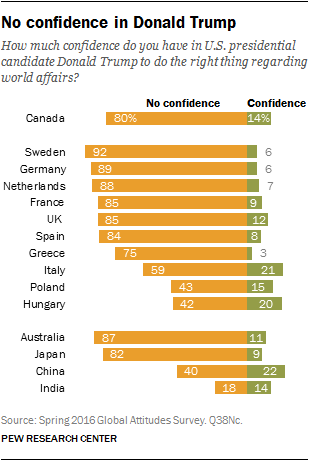 Pew’s poll doesn’t give a reason for why Swedes had such an unfavorable opinion of Trump’s world affairs acumen. Sweden does have a number of policies that are ideologically opposite to Trump’s, however, especially when it comes to refugees.

Sweden took in almost 200,000 asylum seekers amid the mass migration of people to Europe from conflict zones such as Syria, including 163,000 refugee claimants in 2015 alone. The surge in migration led to Sweden putting in place stricter rules for asylum claims last year, and reluctantly giving up some of its status as one of the world’s most accepting nations for refugees.

A common narrative among anti-refugee and right-wing groups is that Sweden’s acceptance of immigration has led to a surge in crimes, notably sexual assault. False stories of refugees committing rape have been circulated on social media and subsequently been debunked. Swedish criminologists have also disputed the link between immigration and sex crimes.

Trump previously described Sweden’s experience with refugees in hyperbolic ways to make his case for temporarily banning Muslim immigrants from entering the United States. In an interview last May with ABC’s George Stephanopoulos, Trump used a line extremely similar to the one said during his Saturday night rally.

In other instances, Trump has said it “wasn’t people from Sweden who blew up the World Trade Center.” Trump also claimed in his book The Art of the Deal that his grandfather was Swedish, but this was later proven to be untrue.

The Trump administration put an incident in the city of Malmo, Sweden, on its list of terror attacks it said the media did not sufficiently report. The so-called attack was actually a minor case of arson at an Iraqi community center that authorities did not describe as terrorism.

Earlier this month, however, Swedish police did arrest three neo-Nazis who were planning a bomb attack on an asylum center.

UPDATE: Deputy White House Press Secretary Sarah Sanders told reporters on Sunday that Trump was “talking about rising crime and recent incidents in general, and not referring to a specific incident.”

Sanders added that the president had been “referring to a report he had seen the previous night.”

Trump himself weighed in shortly thereafter to clarify that he was indeed referring to the Fox News segment about immigration in Sweden:

My statement as to what's happening in Sweden was in reference to a story that was broadcast on @FoxNews concerning immigrants & Sweden.