A few lucky workers in Gothenburg, Sweden, will scale back to a six-hour workday this summer as part of an unusual government experiment.

The test group of government workers will work a six-hour day beginning July 1, while a second control group will continue to work an eight-hour day, according to The Local, an English-language news site.

The government hopes to find out whether shorter days will translate into higher productivity per hour and fewer sick days. After one year of the test, the government will decide whether to extend the program to other sectors of the government.

Pilhelm also told the AFP he believed the shorter shifts would lead to an increase in worker efficiency. Longer shifts, he believes, require employees to take more breaks.

"Every time you have a break, it takes 10 to 15 minutes to get back to work, because you have to see where you were when you left off," he said, adding that a Gothenburg Toyota factory had seen promising results after testing a six-hour workday.

Another Swedish town, Kiruna, long ago decided to test out the six-hour workday. But the town decided to end the 16-year experiment in 2005 after some complained that a compressed workweek actually put more pressure on workers who struggled to increase the pace of their work.

Gothenburg's new experimental policy stands in contrast to the the United States’ “cult of overwork," where employees are often expected to exceed the 40-hour workweek. A 2013 survey found eight in 10 Americans feel stressed about their jobs; common woes include an increasing workload and decreasing work-life balance.

There is some evidence to support the notion that productivity declines as work hours increase, but real-world applications of reduced workweeks yield mixed results.

France is seen as something of a champion of a worker's right to leisure time. Recently, the nation approved a labour agreement that obliges consulting and technology employees to "disconnect from remote communications tools" at the end of the workday.

And though France is sometimes known as "the land of the 35-hour workweek," the reality is often quite different. For instance, 50 percent of blue-collar workers put in paid overtime in 2010, and a Reuters report found that French middle managers worked an average of 44 hours per week.

On the flip side, German workers put in an average of 394 hours less than Americans each year, and still manage to have the world's fourth most productive economy. But even there, some companies have been quietly renegotiating 40-hour work weeks.

If Sweden's latest foray into shorter workdays pays off, harried American employers could take a lesson from this experiment in Scandinavian ingenuity. But we're not getting our hopes up.

Sweden already has some of the shortest work hours among OECD countries. The chart below shows the average number of hours worked per year in 31 nations; Sweden comes toward the end of the list. 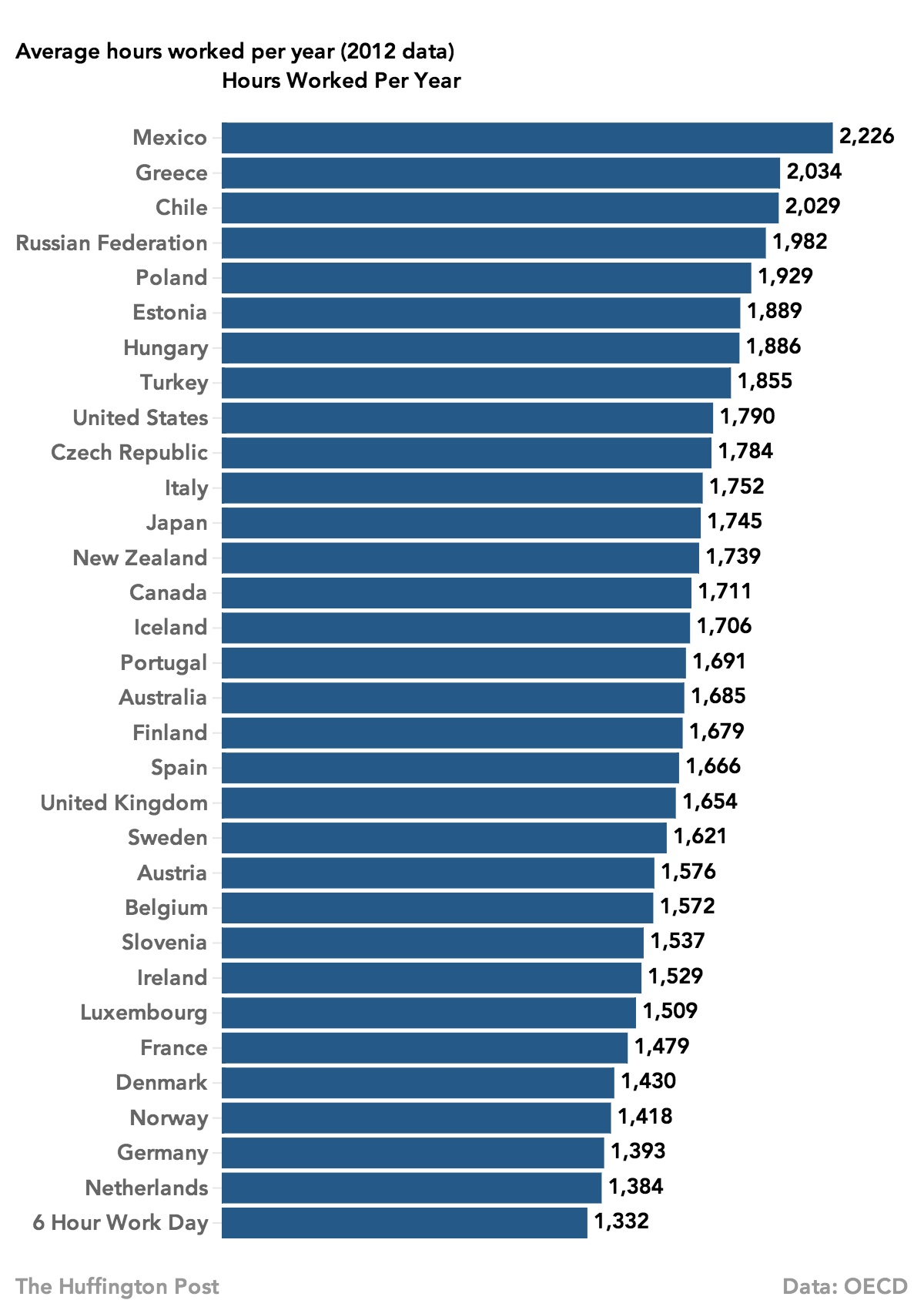