A 5,500-year-old tomb possibly belonging to a Stone Age chieftain has been unearthed at a megalithic monument in the shape of a ship called the Ale's Stenar (Ale's Stones). The tomb, in Sweden, was likely robbed of stones to build the Viking-era ship monument.

"We found traces — mostly imprints — of large boulders," said lead archaeologist Bengst Söderberg of the Swedish National Heritage Board. "So my conviction is that some of the stones at least, they are standing on the ship setting."

Perched on a seaside cliff in the village of Kåseberga stands the Ales Stenar, also called Ale's Stones, 59 massive boulders arranged in the 220-foot (67-meter)-long outline of a ship. Most researchers believe the 1,400-year-old ship structure is a burial monument built toward the end of Sweden's Iron Age. Local legend has it that the mythic King Ale lies beneath the site.

The Ales Stenar megaliths, some of which weigh as much as 4,000 pounds (1,800 kilograms), have distinctive cut marks similar to ones found at Stone Age sites. So researchers wondered whether the stones were stolen from an even older monument, Söderberg told LiveScience. [See Photos of Ale's Stones & Tomb]

In 2006, archaeologists used magnetic sensors and radar to map the area's underground terrain and found a larger circular structure about 541 feet (165 m) in diameter, with a 65-foot by 25-foot rectangle at its heart.

Last week, the team finally dug a small trench through the center of the circle and unearthed the imprints of giant boulders that had been removed long ago. Though the team didn't find a skeleton, the imprints suggested the site was a Neolithic burial chamber called a dolmen — several upright stones with a horizontal boulder on top in which a body would be placed.

"All of the stones had been taken away. And I would say, most probably they are standing 40 meters away from the dolmen where the ship setting is situated," Söderberg said. 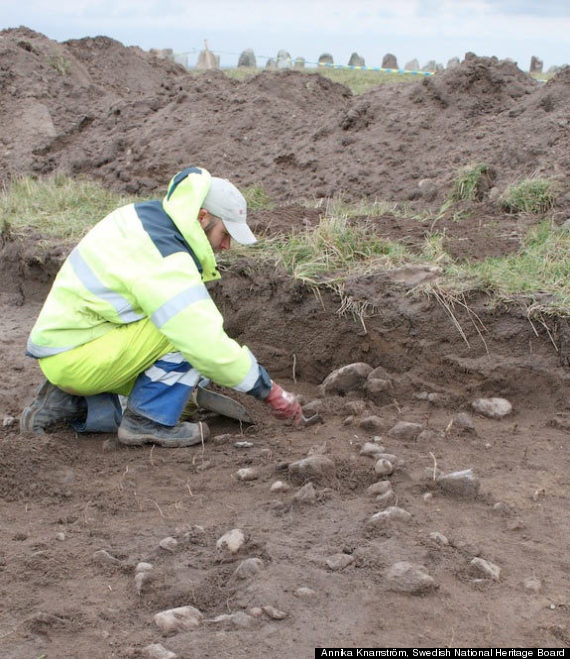 The team unearthed the imprints of giant boulders that had been removed long ago.

Based on the layout, the dolmen may be up to 5,500 years old — possibly older than Stonehenge. The large burial chamber likely belonged to a local chieftain or the head of a clan during the Neolithic Era, he said. Because there was very little evidence from the outer ring, the researchers aren’t yet sure what it was used for or whether it’s as old as the dolmen.

Thousands of dolmen sites are scattered throughout Scandinavia, though later civilizations stole many of the boulders to build churches and other structures, he said.

The giant rock monuments suggest that even our Stone Age ancestors had a sense of posterity and permanence, said Magnus Andersson of the Swedish National Heritage Board in an email.

The new tomb also shows that this particular spot, with its dramatic cliffs overlooking the Baltic Sea, has inspired people in many different ages, he said.

"The scenic place on the ridge must have attracted people in all times," he said. "It shows that people over a long period build their monuments and perform their ceremonies on the same sites.”