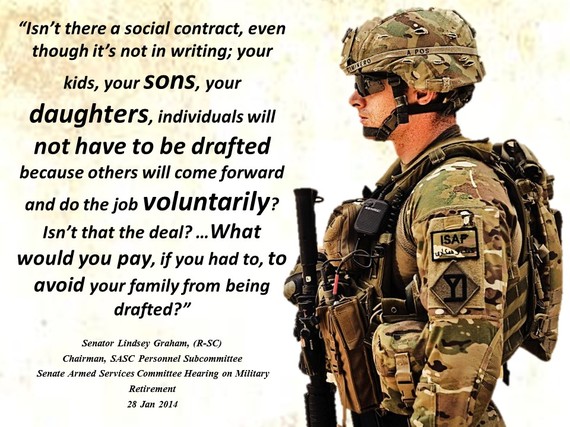 Senator Graham's question is about to be pondered in a way that has not happened since the draft ended 42 years ago. This will be a game changing debate.

The Military Compensation and Retirement Modernization Commission (MCRMC) is set to release its report this Thursday, the 29th of January. Our nation will have to grapple with the commission's conclusions and the implications to our All-Volunteer Force (AVF).

What is the MCRMC and Why Does It Matter?

The MCRMC was mandated by the 2013 National Defense Authorization Act (NDAA). The MCRMC is overseen by nine commissioners that directed a staff to look at what type of military pay and compensation package would ensure the feasibility of an AVF, now and in the future.

Five Things to Consider when the MCRMC Report is Released

*A note to those not connected to the military community; we need your support. Don't make the mistake thinking this won't impact you or your family. Think about Senator Graham's quote and what your son or grandson (or possibly daughters) would like to do in the future. Our service members and veterans are exceptionally proud of their service, but it certainly isn't for everyone.

How the MCRMC Came to Its Conclusions

Over the past year and a half, the MCRMC commissioners and staff have met with and surveyed tens of thousands of service members, retirees, veterans and groups that represent them, in order to better understand what it is that makes the all-volunteer force tick.

The MCRMC wanted to hear from the entirety of our community; the E-4 with two kids stationed at Ft. Hood as much as the single O-6 inside the beltway, Reservists and Guardsman as well as active duty, retirees and veterans. They spent considerable time at dozens of bases and met with many military family members and groups that represent all of the above .

While I am certain many think this was simply a cost cutting exercise, the MCRMC goals and comments to date don't support that contention. As reported last November, MCRMC Commissioner (and former Representative) Steve Buyer said,

We're going to work on what's important to properly recruit and retain and resource the force necessary for the war after next. I have told leadership at the Pentagon that their present budget issue is not my problem. Don't look to me (as a commissioner) to solve your present budget problem. If you've got issues with sequester, then you deal with that with the Congress. That's not my job.

How You Can Take Action for Change

So, what's next? You need to take action today, after you read this piece. Contacting the Congress prior to the report coming out; telling them you intend to watch every hearing, every speech, and every vote they take on this issue will make an impression. Make sure they understand you will hold them accountable in 2016 if they fail to listen to you. You'll need to do it again once you've digested the report. Even if you don't have time to absorb what I suspect will be a lengthy report, take the time to read others analysis.

The House and Senate Armed Services Committees (HASC and SASC) are where these issues are going to be heard first and foremost, to include, I suspect, multiple hearings on this topic (some as early as next week). To reach members of the HASC and SASC, we've put together a list of Twitter handles and direct emails to the primary POC in each office on military related issues (usually the military legislative assistant): If your Representative or Senators aren't on either committee, use this link to contact any member of Congress.

If the Congress thinks we aren't watching or that we don't care, DoD's voice, supplemented by the rest of the military-industrial complex, is liable to be the loudest in the room. Tell your Representative and Senators your story and help them understand your opinion on the MCRMC's findings. They represent you ....make them do their job.

Conclusion
I realize there will be plenty of naysayers about this commission's conclusions. But, stop and think about what you've heard the past 4 or so years from DoD leadership regarding military personnel and their pay and benefits:

"we have to slow the growth in pay."

"I truly believe it will raise discipline. And it will raise it because you'll have better spending habits. You won't be so wasteful."

And this is from people who are supposed to have our backs?

"Military retirement is unfair and unaffordable."

It's almost as if DoD Public Affairs is coordinating their message within the Pentagon, these think-tanks (many who receive money from DoD) and journalists.

Retired Admiral John Harvey said this towards the end of 2013,

We are sending the force that is serving today, the one that fought two wars in the last decade, and the force we are depending upon to re-enlist tomorrow the wrong signal. We're telling them they just cost us too much, that they constitute a "ticking time-bomb," and that they're "eating us alive."

We are telling them that we are looking for a way out of fulfilling our commitments to them. Is this how you characterize those who volunteered to serve in time of war? ... The current nature of the debate over the current and future cost of the All-Volunteer Force is inadequate for the magnitude of the issues at stake.

We must make some fundamentally different choices on how we frame these issues and make our decisions. We must focus on the required level of investments in the human capital needed to sustain the force we have chosen send in harm's way and fight for us.

The entire piece and a follow-up are worthy of your time.

I am of the opinion that the MCRMC process met Admiral Harvey's recommendation for reframing this issue more appropriately than we've seen coming from the Pentagon these past four years. Once the MCRMC recommendations are published, we must continue this dialogue on Capitol Hill, focusing on what's required to maintain a robust AVF.

Just as important as listening to the Admiral's recommendation on framing the issue is some sort of end game for this discussion. Recently, former Army Chief of Staff, General Gordon Sullivan, said,


Soldiers and their families are being worn down by constant discussion about cutting pay and benefits, to the point where the conversation might be more damaging than the outcome.

He is exactly correct. Are the MCRMC recommendations a perfect solution? No; but perfection isn't attainable. The MCRMC's recommendations may be the most reasonable offer we are likely to hear and one that I am hopeful imposes a certain amount of finality on the topic. We as a nation either are willing to provide the funds to sustain the All-Volunteer Force or we aren't. If we aren't, then a different discussion needs to take place and we better make sure our Selective Service System is ready to go.

Make no mistake about it; reforms are coming to the compensation package of our military force. What that package looks like depends in large part on what choice you make next. I think there are two primary choices: You can seriously consider this independent commission's goals and provide feedback on their conclusions to your elected representatives, or you can do nothing and watch as DoD continues to "nickel and dime our people to death" for the foreseeable future.

Either way, you have to decide what action you will take. In the end, many of us may differ on what the final military pay and benefits package should look like...what I want more than agreement is your involvement. Sitting this one out isn't in yours or our nation's best interest.

This article was originally published at USMCLife.com.