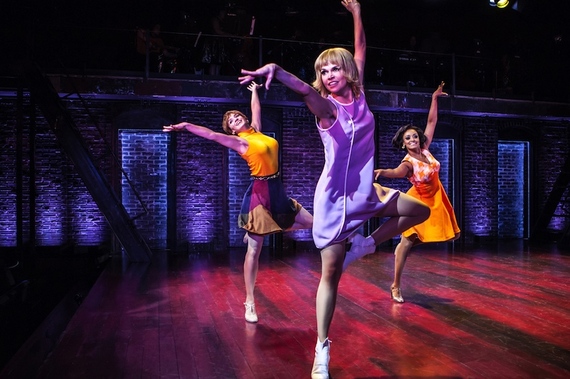 When they build the musical theater equivalent of Mount Rushmore, I know who one of the faces will be. My only complaint about the inimitable Sutton Foster is that I have a hard time figuring out what she does best. Flawless dancing? Check. Stunning singing? Yup. Hilarious physical comedy? For sure.

But the thing that puts the cherry on the Foster cupcake (and makes her latest, a small-scale revival of the 1966 Cy Coleman-Dorothy Fields-Neil Simon musical Sweet Charity, so brilliant) is that while doing all that singing and dancing and laugh-generating and even gymnastics (just watch this), she manages to imbue every moment with a depth of character that most performers don't attain even without the high kicks and tumbles. The psychological and emotional progression of the story doesn't stop for the musical numbers, rather, thanks to Foster, they are expanded by it.

This revival is not as sweet as Charity usually is. Director Leigh Silverman, has reconfigured things a bit. The big brass band of an orchestra has been whittled down to a six-member all-woman band. She has re-inserted some of the Fellini grit from the source material, the 1957 film about a hopeful hooker, Nights of Cabiria. The film became the 1966 Broadway show directed and choreographed by Bob Fosse and starring his then wife, Gwen Verdon, as the goofy and good-hearted dime-a-dance girl, Charity Hope Valentine. The show then morphed into a 1969 film directed by Fosse and starring Shirley Maclaine. And now the New Group has taken on the task, with a modest stage, pared-down set, and reduced cast that somehow manages to make you believe there are about three times more of them than there are.

This Charity, like all the others, is an irrepressible romantic. But unlike her predecessors, she has begun to suspect that something may have gone seriously wrong. Director Leigh Silverman has wisely amped up the sorrow at the center of all that singing and dancing, a smart move in a time when a musical about a woman who is taken advantage of and serially used by men might not seem so hilarious.

She's also moved the deeply affecting song, "Where Am I Going?" to the close of the show, and jetissoned the positive-attitude ending of the original and the movie, both of which closed with the words "And so she lived hopefully ever after" before us.

The performances are uniformly superb, with well-deserved shout-outs to Joel Perez who plays four different characters with such remarkable distinction that I didn't realize until I looked at the program that it was Perez in every role. Nikka Graff Lanzarone reveals similar skill in a passel of female roles, and Asmeret Ghembremichael and Emily Padgett are terrific as Charity's friends and fellow dance hall pals, Nickie and Helene. They help Foster turn the show's most memorable number, "Big Spender," from a sexy come-on into an angry, dark dare. And, of course, the always-welcome Shuler Hensley is marvelous as Charity's sad-sack schlub of a boyfriend Oscar, who captures, and then breaks, her Tootsie Pop heart.

My only quibble is the ratty shag wig and pale lavender dress that Clint Ramos has designed for poor Charity. Yes, I know she's not a princess. But did they have to try to make her look like she's been sleeping in the gutter? She's a dime-a-dance girl, not a charwoman.

But minor, I know, next to everything this production brings to the stage. There's talk of it moving to Broadway in the spring, and I hope it does. A bigger stage won't dampen this Charity's charms, it will only expand them.

The Rockettes Shine in the Radio City Christmas Spectacular