When we heard Cheetos was releasing "Sweetos," or sweet Cheetos, our hearts dropped. Cheetos are pretty much perfect. Why mess with perfection? And not only that -- why do it by eliminating the best part about Cheetos, the cheesy powder that gets everywhere and impels us to lick our fingers? To us at HuffPost Taste, Cheetos Sweetos were an immediate sin. (We also couldn't stand the name.)

In Cheetos' 67-year-history, Sweetos are the first and only sweet flavor to ever be introduced. We wrote them off as a massive mistake, until we tried them.

Having apprehensively tasted Sweetos, which resulted in polishing off the whole bag, we can now safely say we stand corrected. Sweetos aren't so bad at all. In fact, they're kind of really good. The sweet Cheetos are cinnamon sugar puffs, which, although they sound like a snack for babies, are strangely good and somewhat addictive.

The sweet snacks have got a satisfying crunch and they're light enough to plow through an entire bag. The cinnamon powder is reminiscent of Cinnamon Toast Crunch, which is never a bad thing. We weren't the only ones to be pleasantly surprised by Sweetos either. A round of HuffPost Editors who tried the snacks had similar reactions: "Not bad," "I actually like these." Even though the resounding response was that everyone would have just preferred classic Cheetos, nobody hated Sweetos, and some came back for seconds and thirds.

They look kind of weird, but so do original Cheetos. We'll say it. 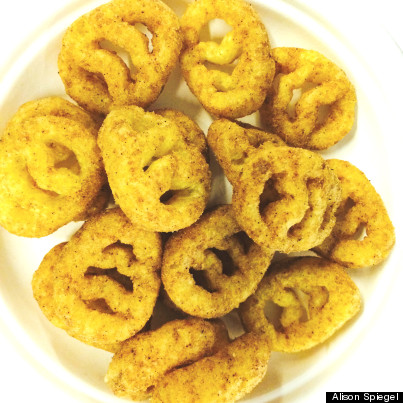 While we can admit we were wrong, we will say that our inclination to hate Sweetos at first glance was justified. Cheetos has made some bad mistakes. (Ahem, Cheetau, Cheetos perfume.) Not only that, but the Pavlovian response when we see Chester and the word "Cheetos" is to want the classic -- a big bag of original Cheetos. We don't want dessert.

The key to liking Sweetos is two-fold: One, go in with low expectations like we did, and two, put cheesy Cheetos far out of your mind. Do not compare the two. If you can do both of those things, we suspect you'll fall for sweet Cheetos as hard as we did.

They're almost as good as that time Cheetos looked like stuff (no really, they looked exactly like things, like a T-Rex, the Loch Ness Monster and the Flux Capacitor).

We should never have doubted you, Chester. 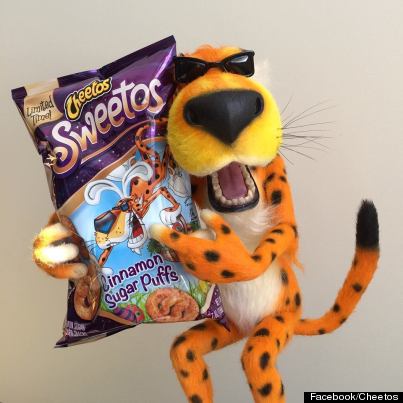 But we'd still rather eat a bag of original Cheetos.

Cheetos Sweetos will be available at retails stores starting in mid-February for a limited time only.