"Demographics are destiny" is a political cliché largely because it's true. In the wake of President Obama's resounding reelection last November, the pundit class has become more attuned to the demographic shifts that twice helped put states like Florida, Virginia, Nevada, and Colorado into the Obama column. Even before the last confetti fell on Election Night 2012, Democrats had affixed their eyes upon Texas. The Lone Star State, many correctly argue, is undergoing the same fundamental demographic shifts as several of the Southwestern states that went blue in 2008 and 2012. And a Blue Texas, Democrats swoon, would virtually ensure a continued Democratic hold on the White House.

Texas is no doubt becoming more Democratic by the day, and groups like Battleground Texas are already hard at work smartly building the infrastructure to help make Texas competitive. However, demographic and election data indicate the same trends that will make Texas a swing state will even more immediately put Georgia's 16 electoral votes in play, expanding Democrats' paths to an electoral vote majority.

In both 2008 and 2012, Georgia was one of the most competitive states won by the Republican nominee.

Georgia is not only among the more competitive GOP-leaning states, but also has become more competitive each of the last two cycles. John Kerry's share of the vote in Georgia lagged his national vote share by 6.9 percentage points, despite sharing his ticket with a native of neighboring North Carolina. In 2008, Obama narrowed that gap by a full percentage point to a 5.9 percent disparity in his Georgia vote (46.99 percent) and national performance (52.93 percent). Obama's Georgia vote share declined in 2012, as did his national vote share. However, the Obama vote share decreased less in Georgia than it did nationwide, and Obama's 2012 Georgia performance came even closer to his nationwide vote share (5.57 percent vs. national) than did his 2008 performance (-5.99 percent). 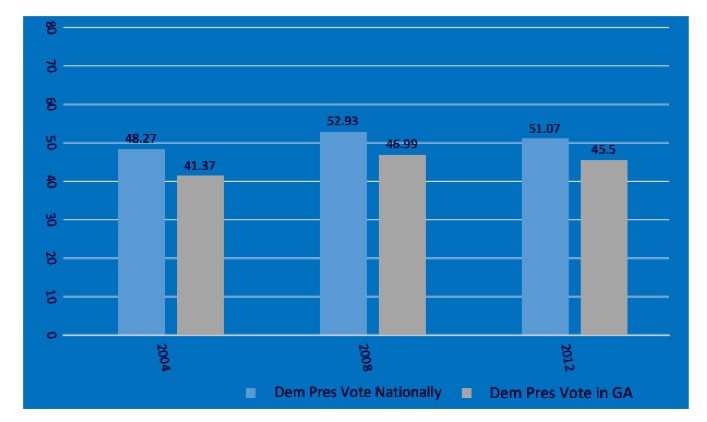 As Georgia was not perceived to be a swing state in either 2008 or 2012, the Obama campaign did not invest in significant paid communications or field activity. No amount of Obama investment in Georgia would have been likely to put the state in the Democratic column in 2012, and if it were truly competitive, Republicans would have countered with spending of their own. However, if the Obama campaign had allocated just a fraction of the $24 million spent on television adverting in North Carolina to Georgia, it is almost a certainty that Romney's single-digit margin in Georgia would have been even narrower.

What is driving this steady shift toward Democrats?

Most fundamentally, Georgia is quickly becoming less white and less rural. In 2000, Georgia's population was 63 percent white; as of the 2010 Census the state's population is 56 percent white. Of the state's 1.5 million new residents between 2000 and 2010, more than 80 percent (1.2 million, or 81 percent) were non-white.

Over the past decade, the 6 percent growth among Georgia's white population pales in comparison to the 26 percent growth rate among African Americans. This is in stark contrast to the growth patterns of the 1990s, when Georgia's white population grew by more than double that rate (16 percent). Since 1990, Georgia has gained more than 1.2 million African-American residents and has served, according to The Wall Street Journal, as a "magnet for black professionals" from other parts of the country.

However, Georgia's increased competitiveness is not driven solely by African-American voters. Georgia's Hispanic population grew by 96 percent over the last decade -- a growth rate double the national average and second only to North Carolina's. From 1990-2010, the state's Hispanic population has risen from roughly 100,000 to more than 800,000 -- now totaling 9.1 percent of the state's population. Additionally, Georgia's Asian-American community grew by 81 percent from 2000-2010 and has almost quintupled since 1990. 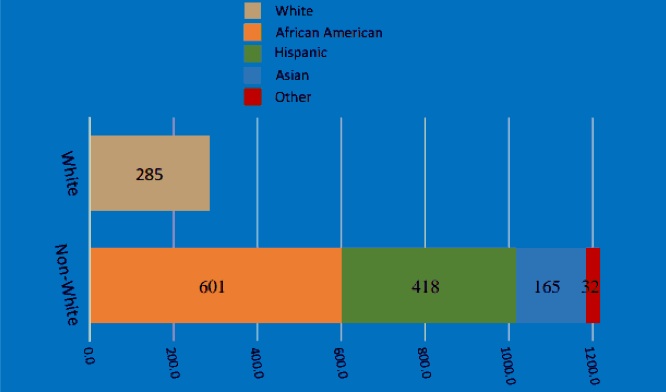 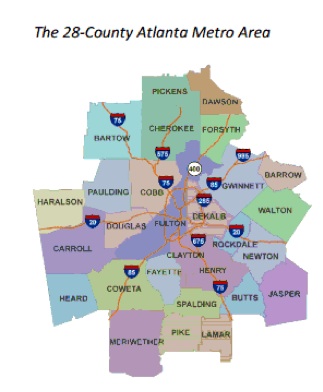 The epicenter of these demographic changes is the Atlanta metro area. As this area grows more diverse, it is becoming more Democratic and expanding its footprint on the state's body politic. Metro Atlanta (map to left) comprised roughly 52 percent of the electorate in the 2000 presidential race, but 54 percent in the 2012 election (and likely 56 percent in the 2020 election). Of metro Atlanta's roughly one million new residents over the past decade, 90 percent are non-white (54 percent African American / 31 percent Hispanic). This growth reduced the metro area's white percentage from 60 percent in 2000 to 51 percent in 2010. Conversely, African Americans (from 29 percent to 32 percent of the area's population) and Hispanics (from 6 percent to 10 percent) have undergone a population boom. The electoral effects have been unmistakable. In 2012, Obama actually took a majority (50.3 percent) of the two-party vote in the metro area, roughly six points higher than John Kerry's 44 percent in 2004.

Gwinnett County highlights Georgia's dramatic demographic shift over the past decade. In 2000, Gwinnett County (the second most populous in the state) was 67 percent white. Now it is majority-minority (44 percent White / 24 percent African American / 20 percent Hispanic) due to a 143 percent increase in the African-American population and 153 percent Hispanic increase over the past decade. While Al Gore lost 2:1 in Gwinnett County (Gore 33 percent / Bush 67 percent of the two-party vote share), Barack Obama ran just 10 points behind Mitt Romney in Gwinnett in 2012 (Obama 45 percent / Romney 55 percent). Obama even grew his vote percentage in Gwinnett from 2008 to 2012 despite losing ground nationally and statewide, clear evidence of a continuing trend. This is also not solely an Obama-driven phenomenon: controlling for national performance, Gwinnett County has shifted a net 6 points more Democratic per presidential election cycle since 2000. 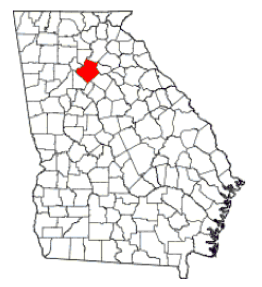 Based on current population trends, Gwinnett County will be Georgia's most populous county by 2020 with more than one million residents. And, again assuming current trends continue, a Democratic candidate with a narrow 51/49 national popular vote margin would be likely to also carry Gwinnett County in that year. Certainly Gwinnett County is not a precise microcosm of the state, and some of the demographic shift in Gwinnett is driven by white voters moving from suburban Gwinnett to exurban counties like Forsyth. However, other metro Atlanta boom counties have also trended Democratic over the last few cycles. In 2012, Obama carried Douglas County by 4 points, though it gave just 37 percent to Al Gore in 2000. And while Henry County gave George Bush a greater than 2:1 margin in 2000 (32 percent Gore), Barack Obama nearly fought Mitt Romney to a draw in 2012 by taking 48 percent of the vote.

Within a few years, these trends could dramatically alter Georgia's political DNA.

Over the next ten years, Georgia will likely add 500,000 more Hispanic and 600,000 more African-American residents. The 2008 electorate (that yielded just a 5-point McCain win), is on track to be several points less white (from 65 percent to 61 percent), more African American (from 30 percent to 32 percent) and more Hispanic (from 3 percent to 5 percent). These projections indicate that a 2020 Democratic nominee who performs the same among each racial subgroup as Obama did in 2008 (according to exit polls) would take roughly 50 percent of the statewide vote, reminiscent of the Obama campaign's narrow victory in North Carolina in 2008.

In the summer of 2013, Georgia might not seem an obvious target for the next Democratic nominee for President, yet the same factors of non-white and metropolitan growth are largely what caused Virginia and North Carolina to enter the swing-state lexicon in 2008. African-American and Hispanic growth outpacing white growth and the increased footprint of Northern Virginia and the Research Triangle metro areas thrust those two Mid-Atlantic states to the top of both parties' target lists in 2008 and 2012.

This data points to Georgia being poised to enter that rarefied political air of a swing state over the next couple of cycles. Of course, Georgia's continued drift toward Democrats isn't guaranteed: the demographic trends in Georgia could slow or reverse, and African-American voters could revert to lower turnout rates and Democratic margins once Obama is no longer on the ballot. But at the same time, things may look even better for Democrats in Georgia than we've outlined. Our analysis doesn't take into account the potential for a non-Obama Democrat to attract more Southern white votes. We also assumed demographic trends will stay constant, when in fact in the last decade Georgia's white growth slowed while its non-white growth rate accelerated.

While Georgia Democrats have struggled in recent statewide elections, Democrats have a solid bench of rising stars including Atlanta Mayor Kasim Reed, Congressman John Barrow, state legislators Jason Carter, Stacey Abrams, Scott Holcomb, and non-profit founder/CEO Michelle Nunn, among others. (Disclosure: Kasim Reed and Jason Carter are Anzalone Liszt Grove clients). Such Democratic candidates will be well-positioned to run for Governor or Senate as the state's political hue shifts from red to purple. And while the Atlanta-media market is very expensive, a statewide television buy in Georgia is roughly the cost of a North Carolina buy and 20 percent less expensive than a statewide buy in Virginia. A Georgia buy is also just one-third the cost of a statewide broadcast buy in the Lone Star State. As Georgia's political winds shift, Democrats should be able to field strong candidates with the ability to marshal the necessary resources to communicate with voters in a robust way over the next decade and beyond.

For Republicans, it's likely Georgia or Bust.

Certainly, Democrats flipping of a mammoth state like Texas would reshape the electoral map as we know it and, presumably, cripple Republican presidential nominees in the short term. While Texas' 38 electoral votes form the foundation of any GOP-majority, Georgia was the second-most populous state in the Republican column in both 2008 and 2012. Georgia's 16 electoral votes give it more clout than swing states like Virginia, North Carolina, Colorado, and Wisconsin. In fact, Georgia's electoral votes are equivalent to those of Iowa, Nevada, and New Hampshire combined -- and Georgia's likely to have even more electoral votes after the next census due to further population growth. While it is virtually unthinkable to imagine a Republican President winning the White House without Texas, it is almost as difficult for a Republican to reach an electoral-vote majority without Georgia's 16 electoral votes. If Georgia had gone Democratic in 2012, for example, Republicans could have won all of their Rust Belt/Great Lakes targets of Pennsylvania, Ohio, Wisconsin, Michigan, and Minnesota and still would have lost 274-264.

Given the demographic shifts underway nationally, there are several opportunities for Democrats and several headaches for Republicans. Population trends can change and parties can re-position themselves, but after a decade of states like Virginia, North Carolina, and Colorado becoming legitimate swing states, Georgia could certainly be the next state to move from red to purple -- and potentially blue.

Zac McCrary and Brian Stryker are Democratic pollsters at Anzalone Liszt Grove Research, a public opinion research firm that polled for the Obama campaign in the swing states of FL, NC, and VA in 2008 and 2012.