Nothing ever seems to go wrong on Rosh Hashanah. In fact it's just the opposite. Kind of like Tiffany's. According to Holly (Audrey Hepburn) Golightly, the "mean reds" turn to loveliness as soon as you enter, right down to the engraved crackerjack ring. That's how it is with me and Rosh Hashanah. From cooking to meteorology. The running joke throughout my childhood? "The smell of gefilte fish is in the air, and the weather always turns beautiful for Rosh Hashanah."

When I was growing up, the Jewish New year -- aka Rosh Hashanah -- always meant brisket, apples and honey cake. I can still remember watching my Mom slicing the hard-boiled eggs, pounding the fried onions and livers in a huge cherry wood bowl. The suspense mounted until we got the long-awaited afternoon treat: spoonfuls of warm chopped liver on seeded rye bread. Oy, I can still taste it.

Ok, so I know it's not all about food and cholesterol, but it is about remembrance, family, forgiveness and all things sweet . So when I was spontaneously invited to a service at the Bitter End, I thought -- well, life is all about contradictions! Nothing better than a "bitter-sweet" celebration.

And so I dashed down Bleecker Street to the Bitter End, the legendary 60s hangout for the likes of George Carlin, Pete Seeger, Joni Mitchell, Arlo Guthrie, Woody Allen and Lenny Bruce. 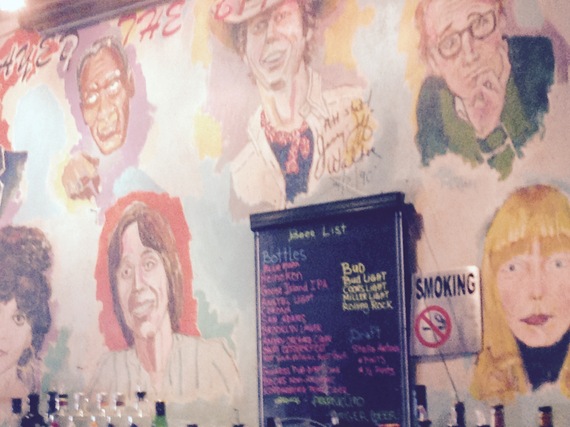 If they could get their start there, why not start off Jewish New Year No. 5776 there? I walked in a few minutes late, quietly sliding onto a barstool, half expecting Bob Dylan to come out and do a set. Instead, I was engrossed in a Jewish jazz service -- a mix of melancholy and joy, humor and solemnity, lament and laughter -- run by the mesmerizing singer/songwriter/rabbi/cantor Steven Blane, and Hebraic harbinger of new traditions.

Feeling the twinge of sadness in the remembrance of Jewish holidays past, celebrated with my parents, I was approached by a charming woman behind the "bar" named Carol. When she asked if I was comfortable, I felt her warmth beam out a soothing Rosh Hashanah light. Turns out she's the rabbi's wife. A Logistics Maven, she seemed the mastermind producer, landing me a prime "orchestra" seat, managing the "act," handling theatrical logistics and monitoring the on-line streaming of the service. 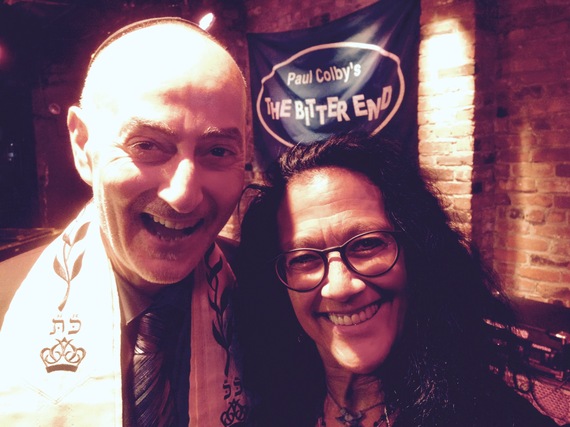 I observed this tall, slim figure, an upbeat combo of Steve Jobs, Jules Feiffer and Howie Mandel, wrapped into one energized, musicalized, spiritualized package. Ironically, we were 200-plus bodies facing the renowned brick wall of The Bitter End; facing the rabbi's hip jazz quartet -- and facing East, towards Jerusalem!

Rabbi Blane comes out of the traditional "brick and mortar" synagogues; he is the quintessence of global community and acceptance. His thing? Blending liturgy and music to create a "space for joyous spiritual renewal." His brainchild? Sim Shalom, an international online synagogue in 25 countries, offering "a new paradigm for worship" and Jewish education. Yup, if you don't want to schlep to a synagogue for Friday night services, you can lounge at home with your PC laptop in your flannel p.j.s and participate in song, prayer and live chat. Blane is also the founder of JSLI, Jewish Spiritual Leader's Institute. 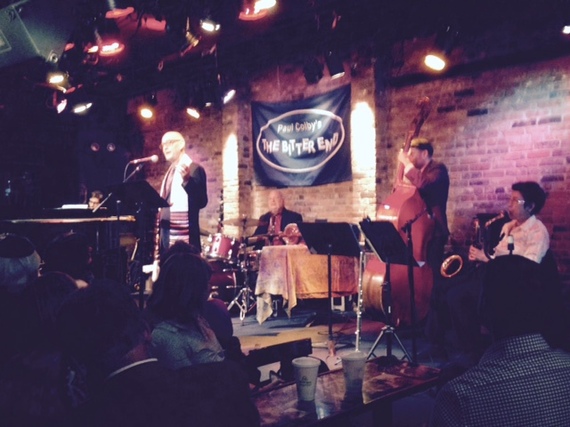 Watching Blane, I was suddenly that wide-eyed, 10-year old girl, back in the 1960s, attending the Young People's Concerts at Lincoln Center, led by maestro Leonard Bernstein. 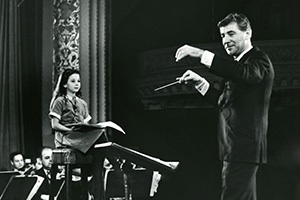 Bernstein and Blane are born conductors of life; both men are firestorms of energy tapered with the tender voice of knowledge and mentoring. Listening to Blane introduce the ancient Mt. Sinai melody Ochila La'El, and explain the liturgy (the chazan/cantor prays for the gift of eloquence of speech in the community), I heard echoes of Lennie's mellifluous words as he answered the question, "What is a melody?" and taught us a lesson on "Musical Atoms: the Study of Intervals."

Whether he's introducing Aleynu, a prayer where rabbi and cantor are on bent knees, bowing in worship to the King of Kings, or teaching us about Job and Bildad, Blane is the ultimate professor, an educator with soul -- "from a serious text we have a very joyous song," a prayer for peace: Oseh Shalom. As Blane speaks of 10th century martyr Rabbi Amnon of Mainz and his poetic chant Un'taneh Tokef, I feel the solemnity of Rosh Hashanah, the frailty of life, the fear of what tomorrow brings. Remembering yesterday's medieval tale of religious torture, I feel connected to today's migrants stuck at the Hungarian border fence and the beheaded victims of Isis persecution.

But wait a bissel. Don't think it's all gloom and doom, fear and judgment. Nope. In the spirit of Jewish humor, Billy Crystal and Bitter End comics, Rabbi Blane is also a jokester. First, there's the one about Moshe the tailor being knighted by the Queen, who asks "Why is this Knight different from all other knights," and then, of course, "A Priest, a Minister and a Rabbi walk into the woods..."

On Rosh HaShanah, the Day of Judgment, it is written: who will live and who will die, who by fire, who by water... though penitence and prayer might soften the decree. We Jews aim to be inscribed in the Book of Life. After all, who wouldn't?! Rosh Hashanah literally means "Head of the Year" in Hebrew. It falls in the month of Tishrei, the seventh month on the Hebrew calendar. The first calendar month is Nissan (when it's believed the Jews were freed from slavery in Egypt); Tishrei is the month God created the world -- the anniversary of the creation of Adam and Eve. I guess you could say Rosh HaShanah is the birthday of the world. So I figured let's go crazy... let's celebrate the world's birthday in a big, unique, bebop-blues-y bossa Bitter End way.

Along with the brisket and cholesterol, Rosh Hashanah brings us the sounding of the shofar -- the ram's horn for reflection -- and a new fruit. It's usually pomegranate, but I opted for papaya. Maybe it's just that triple vowel thing. 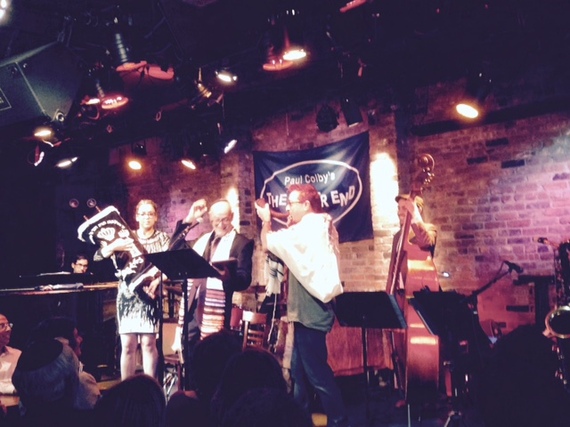 There's a bit of an AHA theme running through this holiday. It's an open mind (a jazz Jewish New Year service) and an open mouth, as you pronounce these words ending in AH -- Rosh Hashan AH. There's my Italian friend Frankie, who did a mitz-vAH by inviting me to hear the band. There's the traditional symbolic, holy scrolled laws of God in the TorAH. The mouth-watering, braided sweet bread Chall-AH (yup, the one the Greek diners use for perfect French toast). And then the quirky assertiveness of human ChutzpAH. 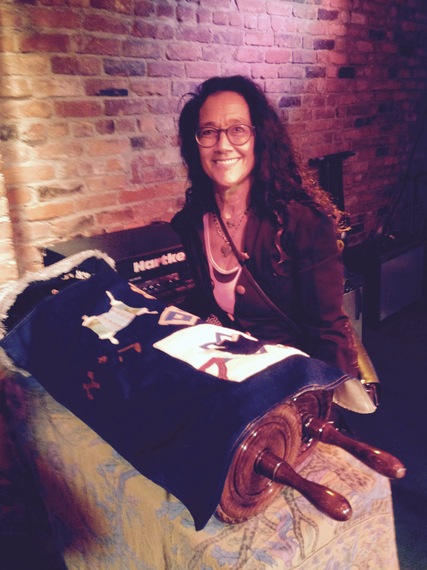 Rosh HaShanah is observed on the first two days of Tishrei. Jewish tradition teaches that during the High Holy Days God decides who will live and who will die during the coming year. On the days between Rosh HaShanah and Yom Kippur, Jews examine their lives, striving to make amends for any wrongs they have committed during the previous year, making plans for improvement in the coming year. This process of repentance is called teshuv-AH. Another AHA moment! Rosh HaShanah is all about making peace and striving to be a better person. Despite the life/death theme of Rosh HaShanah, it is a holiday filled with hope for the New Year.

After the service, I had an uplifting lunch with my dear friend Frankie Stix, the Italian drummer in the band who'd invited me to the Jewish gig. We sat at a sun-drenched corner table of the hip Silver Spurs diner on LaGuardia Place and Houston, ordering eggs over easy and English muffin as if we'd been on a "morning after" breakfast date. Almost like Tiffany's. We discussed everything from modern millennials to the difference between mid-western Jews (voices as flat as the Nebraska plains) and East Coast Jews (as volatile as the Coney Island Cyclone) to Woody Allen's joke about relationships (Annie Hall, final scene): "They're totally crazy, irrational, and absurd, but we keep going ... because we need the eggs."

From there I strolled over to the Vesuvio Bakery on Prince Street, informing a group of friendly Israelis who helped me take a photo, that this is year No. 5766. The shaloms were as extended as the selfie stick. Then onward to my own personal goddess: Water. Off to the Hudson River and my rooftop pool for some solemn, sweet reflection. 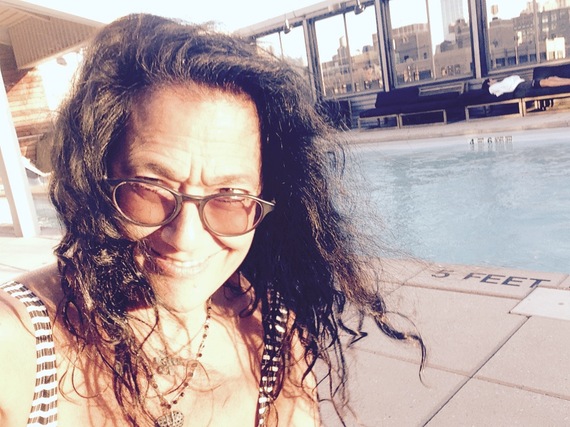 The final touch? A trek to the Soho and Meatpacking District Apple stores -- both so overbooked that I couldn't get my concave warped i-phone fixed. From Silver Spurs to silver linings. That frustrating, tech-y logistics debacle catapulted me into a totally spontaneous visit to Bubby's Highline on Gansevoort (www.bubbys.com), for divine matzoh ball soup (okay, it's not my Mom's, but it came real close). The broth was warm, the matzoh balls just the right balance of sinkers and floaters.Then, as I approached my apartment, I noticed that my satchel (incuding my charger, my journal, and my notes for this article) was missing. I called Bubby's. Not to worry. Yup, sweet Sir Giovanni -- Barista Extraordinaire of soda fountain and take-out service fame -- had held it for me safe and sound. 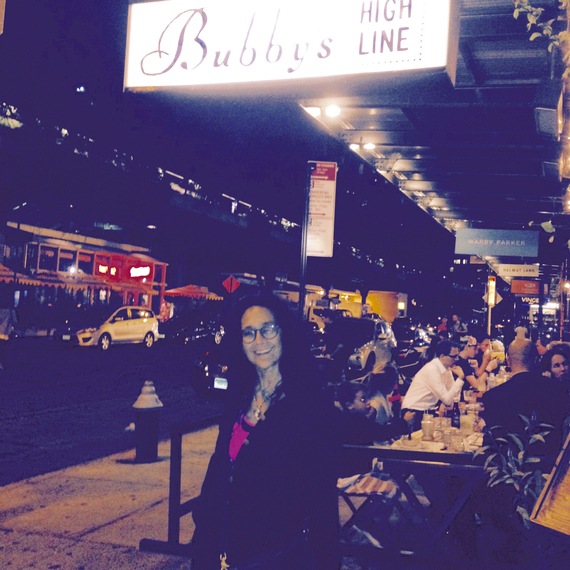 Rosh Hashanah may be paired with apples and honey, but through sweet serendipity, Bubby's recently discovered a sour cherry tree ripe for picking, outside a transplanted farmhouse on the cobblestoned corner of Charles & Greenwich, the site of a garden filled with fig trees and magnolias. The majority of tart cherries were quickly baked into cherry pies. As we speak, the rest are being steeped in vodka for a wintry cocktail: cherry cordial liqueur. Just in time for Hanukkah? 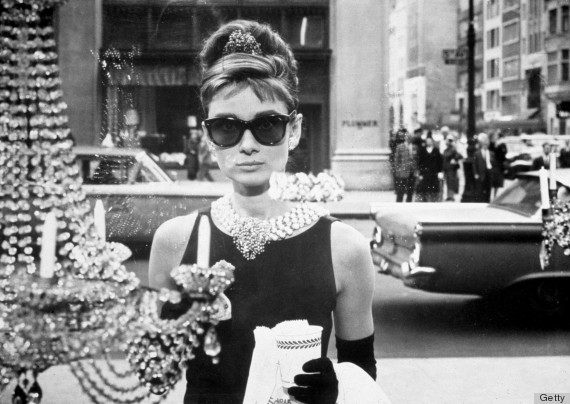 Yes, it was a perfectly divine Rosh Hashanah. Okay, so it wasn't a traditional synagogue, but it was my own personal Breakfast at Tiffany's/Bitter End and Bubby's Jewish New Year, a gala birthday-of-the-world celebration. A good and sweet year. Yes, Holly Golightly: "ShanAH Tov-AH."