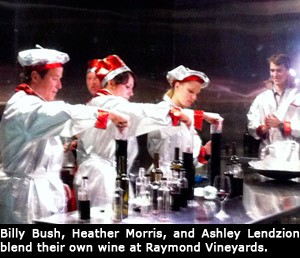 The best ideas are the obvious ones and that applies to bringing a film festival to Napa Valley. Who wouldn't want to attend a festival held in the valley with arguably the best restaurants and wine in the world? The inaugural Napa Valley Film Festival was a raging success. With venues spread from Calistoga to Napa, filmgoers and filmmakers literally enjoyed the fruits of the land.

I stayed in Yountville, where I could walk to restaurants run by some of the most famous chefs in the world, amongst them Redd, Bouchon, Bottega and French Laundry. The moment I got there I knew wanted to eat at all of them and fortunately (or unfortunately) I did. There were winetasting parties at various wineries, including a party at the Mondavi estate, which had a huge swimming pool in the living room. My personal highlight was an extravagant dinner party for sixty-five people at Raymond Winery. We dined among wine vats, crystal chandeliers, S&M mannequins, La Dolce Vita projected on the walls and a few stars such as Adrian Grenier. I was talking to a director of a short film when someone came up to her and told her she looked just like "Brittany" in Glee. Well, it so happens she was indeed the actress who plays "Brittany" in Glee!

Oh, and if one could find the time to see movies, there were some good ones including Clint Eastwood's J. Edgar starring Leonardo DiCaprio and The Descendants with George Clooney. But it was lower-profile films such as Mamitas that won the Audience Award and Best Narrative Feature, and Kumaré that won for Best Documentary Feature, that really got me excited about independent films. My other favorites include Wild Horse, Wild Ride that won Audience Award for Favorite Documentary Feature and The Other F Word which won Favorite Lounge Feature.

While there, I met the owner of a winery who explained to me that the wineries don't compete but rather they work together and this is how Napa grew into what it is today. Isn't this a great microcosm for the world? There is a charity that started in Napa Valley called Roots for Peace - Mines to Vines which helps remove land mines overseas and teaches farmers how to restore the soil and grow new crops. Specifically in Afghanistan farmers are learning that it is more profitable to plant grapevines than opium poppy. I'm pleased to say that I learned about this at the Film Festival Tribute Program. It was truly an illustrious, and informative, event.