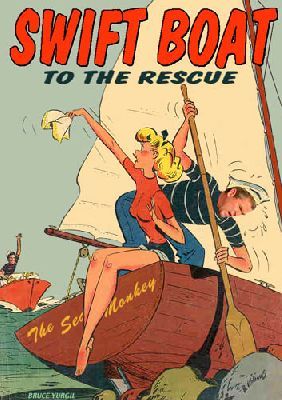 Swiftboating is something I know a lot about. I've written on it for years. The latest efforts by the wingnuts began in January with Fox "News" and Steve Doocy. It continued in February with the Malcolm X hit. In March it was Roger Ailes. April came Townhall. Now, as the primaries close in, it's the Washington Post.

Obama is being swiftboated yet again. It's despicable. It's not surprising, because this is what wingnuts do best. Get scurrilous whisper campaigns inside the hack pack press, long after they've been debunked. South Carolina is known for this stuff. That The Washington Post is revealing it through a long winding piece is journalism at its worst. If it came as a warning on what's on wingnut radio that would be one thing. But what it actually does is provide a platform for a rumor campaign, not to mention a preview of things to come for Democrats. It's John Kerry revisited, the religious version.

Conservative talk-show hosts have occasionally repeated the rumor, with Michael Savage noting Obama's "background" in a "Muslim madrassa in Indonesia" in June, and Rush Limbaugh saying in September that he occasionally got "confused" between Obama and Osama bin Laden. Others repeatedly use the senator's middle name, Hussein.

The rumors about Obama have been echoed on Internet message boards and chain e-mails.

Bryan Keelin of Charleston, S.C., who works with an organization of churches there, posted on an Internet board his suspicion that Obama is a Muslim. "I assume his father instructed him on the ways of being a Muslim," said Keelin, who described himself in an interview as a conservative Republican who will vote for former Arkansas governor Mike Huckabee.

"The Muslims have said they plan on destroying the U.S. from the inside out," says one of the e-mails that was posted recently on a blog at BarackObama.com, the campaign's Web site, by an Obama supporter who warned of an attempt to "Swift Boat" the candidate. "What better way to start than at the highest level, through the President of the United States, one of their own!" ... ..

Foes Use Obama's Muslim Ties to Fuel Rumors About Him

Mr. Obama has to have a signed letter attesting to his Christian faith for assuage Iowa voters? Excuse me, but I'd tell them to go pound sand and so should Obama's team. The Post using this is disgusting. It's even worse than the flag pin hit.

Staggering lack of impulse control and messaging by the Post. But it gets worse.

Obama aides sharply disputed the initial stories suggesting that he was a Muslim, and in Iowa, the campaign keeps a letter at its offices, signed by five members of the local clergy, vouching for the candidate's Christian faith. Aware that his religious belief remains an issue, Obama has denied a separate charge: that he does not hold his hand to his heart during the Pledge of Allegiance. This rumor stemmed from a photo that was taken while the national anthem was being played.

The phony pledge picture was just another attempt to paint Obama as not sufficiently patriotic. I've never kept my hand over my heart while singing the national anthem.

Oh, and by the way, CBS has picked up the story. Our liberal media at work.