Swine flu came to international attention within the past two weeks.
Now, almost as quickly, it seems to be fading from the attention of the
news media at least. This roller coaster has little to do with emerging
infectious disease realities.

To be sure, many questions remain unanswered -- public health experts are
still working 24/7 to clear the fog associated with rapid outbreak
investigations. And they will!

The outbreak investigations are complicated, in part, because they
cross international boundaries. Yet two foremost questions remain:
Will there be a Swine flu pandemic? And, if so, how severe will it be?

There are three key factors that will ultimately govern Swine flu's
pandemic potential.

1. Transmissibility or the ability to pass from infected persons to
susceptible persons. At this point, Swine flu has proven that it can be
transmitted from person to person. When a susceptible person comes into
close contact with a Swine flu-infected person, the chances of transmission are
about 20% according to preliminary reports by outbreak investigators in
North America. This figure will be refined with more data but it appears
sufficient to sustain a pandemic. 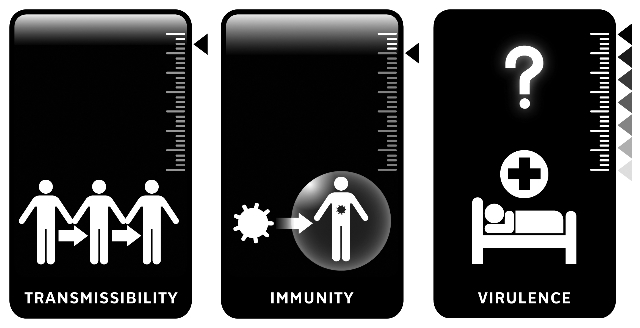 2. Immunity or the ability to protect against infection once exposed.
Swine flu appears to be a new influenza strain for many if not most
people. In other words, most humans worldwide are susceptible and have
little, if any, prior existing immune protection. Whether past influenza
infections or vaccinations will offer any benefit to certain individuals
remains unclear. It is nevertheless clear that Swine flu will require a
new vaccine to reduce human susceptibility on a worldwide scale. The
lack of widespread prior immunity makes conditions sufficient to sustain
a pandemic.

3. Virulence or the ability of the virus to morbidity and mortality. For
unknown reasons, Swine flu appears to be more deadly in Mexico than in
other countries, including the United States. Yet investigators do not
have good explanations for these difference. Is it related to:
Nutritional factors? Baseline health of certain populations? Access to
health care? Access to medications? More undetected infections than
realized with some causing deaths? Counting deaths not caused by Swine
flu? Intensive outbreak investigations are underway to solve this riddle.

The current predicament: Swine flu has already fulfilled two criteria --
efficient transmissibility and limited prior immunity worldwide -- to
sustain global spread. The often used definition of a pandemic is that
25% of the world's population becomes infected by the same influenza
strain. The new Swine flu certainly has that potential.

The World Health Organization's pandemic alert levels signal the spread
and distribution of Swine flu cases. Yet they do not signal how bad a
pandemic might be. These levels are more a reflection of transmission
and immune vulnerability, rather than an indicator of severe outcomes.
There are six WHO alert levels, numbered one to six.

Before the Swine flu appeared, the alert level was set at 3. After the
Swine flu spread in North America, it escalated from 4 to 5 within days.
Alert level 5 reflects spread of a new strain to at least two countries
or one continent -- we are there. Alert level 6 reflects community level
outbreaks in multiple countries and continents -- we are almost there.
News reports indicate that Swine flu has been seeded in 21 countries,
with total WHO-reported cases at 1,409. There are indications that WHO
may declare Alert Level 6 very soon, especially if a large outbreak
cluster is documented on another continent.

This is no time for complacency. We must remain vigilant. The new H1N1
Swine flu remains a real, unpredictable and worldwide threat.