This week was a busy one for the Swiss Global Artistic Foundation (SGAF), led by the elegant and effervescent Heather de Haes, its president and founder. Two Upper East Side events were held back-to-back: a performance at the Swiss ambassador's one night, followed by a gala at the Lotus Club the next. 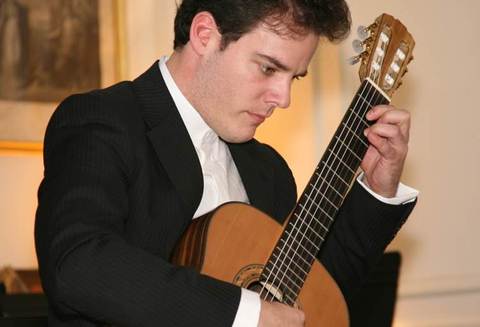 The Foundation supports and nurtures the careers of fine musicians from around the world. Heather stated during the dinner that her goal was not only to inspire young artists, but to also inspire ourselves. The institution is now in its 11th year under Heather's capable leadership.

I was particularly impressed with Simon's mastery of the classical guitar. Simon explained the critical role the Swiss Global Artistic Foundation has played in his career:

Over the past four years SGAF has afforded me a variety of opportunities and experiences. Functions, events, and performances have helped me build contacts and grow as a musician. Teaching in the Playhouse Project was one of the most inspiring collaborations with SGAF. It provided an opportunity for me to pass on knowledge and experience that I have been fortunate to receive.

Simon displayed outstanding sensitivity and a musical maturity that was worthy of any professional concert platform. I know we will be hearing much more from this young man, who now resides in New York. 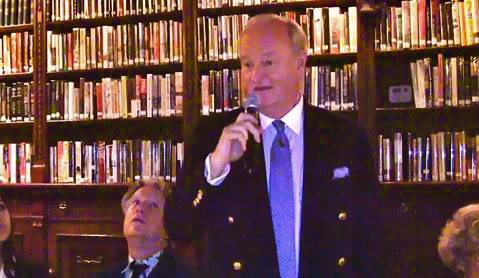 It is a privilege for me to work with an organization that identifies my passion: music. As a young man, I had intentions of pursuing a career as a tenor: the arena of business intervened, but the music stayed strong. As the president of the American Friends of the Swiss Global Artistic Foundation, I am focused on developing and strengthening the USA support for this wonderful cause.

At the Upper East Side residence of H.E. Ambassador François Barras, Consul General of Switzerland in New York, Simon Powis performed classical guitar and Riko Higuma the piano. Matthew Garrett sang tenor with Nesic Djordje playing piano. Sébastian Jacot then performed his magic wooden flute. Riko told me her family is from Sendai, hard hit by recent events, and I felt her performance was spectacular given the concerns she must have. I felt she played in honor of the tens of thousands who are no longer there. 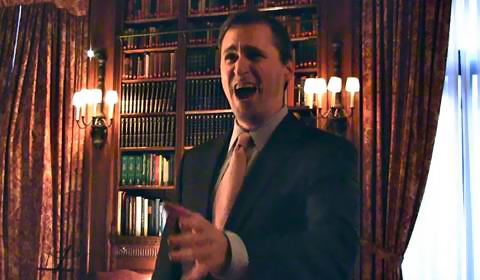 At the next night's gala at the Lotus Club, with its theme "Feel the Art," the simple yet elegant dinner centerpieces reflected the down-to-earth yet other-worldliness of the Foundation's founder, Heather de Haes. I knew I was in store for a treat as I ascended the grand staircase of the Beaux-Arts mansion.

The glorious event began with Matthew Garrett singing tenor, first singing Donizetti's aria "Una Furtiva Lagrima" from L'elisir d'amore, but then singing the less classical but equally spectacular "Maria" from Lenny Bernstein's West Side Story. We then adjourned into the library with its 20-foot ceiling, replete with a table for 36. The warm wood-paneled room, with its velvets and lace curtains and floor-to-ceiling bookshelves seemed to embrace the many talented performers. 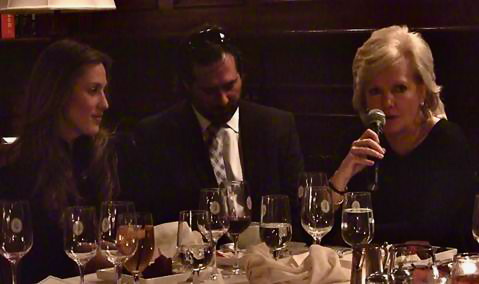 Sébastian's playing particularly captivated me. The young flautist, dressed in his classic black-and-white tuxedo, played excerpts from Carmine with both expertise and enthusiasm. The notes seemed to fly out of his instrument, and the dinner crowd exploded in applause when he bowed.

Being a generally European group, the musician was referred to as a «flau-tist,» not "flut-ist" as is common here. With portraits of the historical club's founders staring down on the proceedings with gravity and approval from their gilded frames, it seemed a perfect evening. 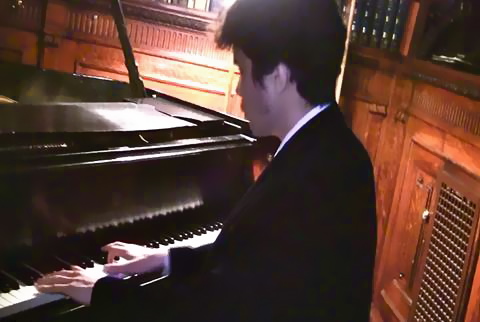 Stephen Whale, a young concert pianist studying at Yale, did a stellar job of explaining to me the complexities of music. As a former literature major, I appreciated the insight for a non-specialist. Stephen explained that music, like other the arts, tells life stories. But rather than using specific places, people, and events like in the visual arts or theatre, it tells stories in tones and rhythms, songs and dances. Through the elements of melody, rhythm, harmony, textures, and instrumental colors it conveys progressions in states of the soul. He continued:

Melody is the primary element of the folk or popular song and it is the most human aspect of music. It conveys most directly the emotional expression of the musician. The way melody works is by creating shapes and colors according to the highs and lows of the tones, as well as the quality.

Rhythm is what gives vitality and motion to melody. Underlying any piece of music is some kind of meter, a regular alternation of beats into groups of two and three, with a downbeat and an upbeat. This reflects not only dance but the basic process of our bodies and the earth. Think of the 'da-dum' of the heartbeat and the inhalation and exhalation of breathing.

Harmony provides a wider world for melody and rhythm to play in. Harmony gives emotional expression a range of colors in a similar way to melody, but the palette is more vast. In a pop song such as "Yesterday" or a Beethoven symphony, the harmony ebbs and flows between darker and lighter colors, tension and relaxation, detachment, and involvement. 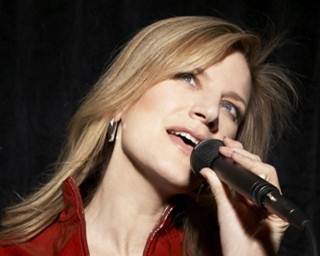 The people present at the luxurious dinner were also heavy hitters. Giancarlo Bruno, a director of the World Economic Forum, told me from his Italian perspective:

Organized with flawless Swiss rigor and exquisite Anglo-Saxon elegance, the Swiss Global Artistic Foundation dinner tonight was a true pleasure. The sophisticated cadre of the Lotus Club, with its historical mansion flair where all forms of art have always been loved, was the ideal home for a truly enticing soiree dedicated to all forms of music, from classical to jazz to blues.

Young impressively talented musicians from all over the world shared their dinner and their art with all guests, bringing them to cheerful celebrations all the way to heights of emotion. With understated elegance and eclectic artistic sensitivity, the SGAF's president Heather de Haes managed to blend musicians and New York society in the most enjoyable of mélanges. 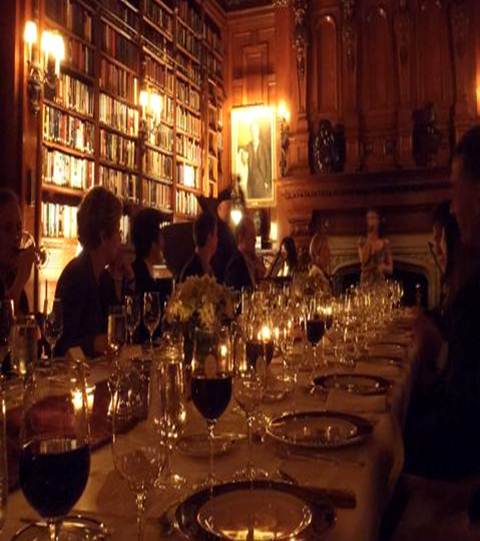 Young 13-year-old pop vocalist, Amanda Barbarise, performing for the guests. Photo: SGAF.
One musician commented how honored she was to be part of the gathering, not separate from it. "I appreciate an event so much when the musicians are treated as human beings, not wait staff."

The Swiss Consul General, François Barras, commented to me:

What I really liked about tonight was the combination of classical music and jazz as well as the wonderful energy of the young musicians. It was a perfect tribute to New York as a great cultural city attracting the best talents. Heather really knows how to create magical moments. 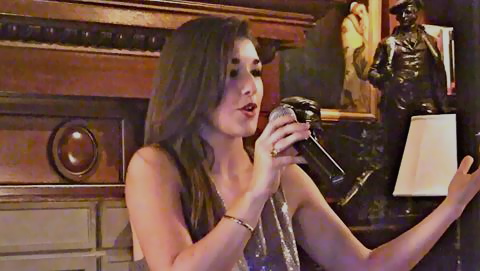 Another diplomat in attendance was the Australian Consul General, Phil Scanlan. In an interview after the gala, he told me:

Former U.S. Defense Secretary Bill Perry once said, after attending the ground breaking concert by the New York Philharmonic in Pyongyang, "You cannot demonize people when you are listening to their music. Providing North Koreans with a taste of real American culture through music demonstrates why music and the creative arts should -- and deserve -- to be supported.

The Swiss Global and the Australian Music Foundation are geared to enhancing this theme of global unity -- bringing people together to feel the art and touch their senses.

Australian Aboriginal culture, for example, is one of the oldest continuous cultures in history, in which we are witnesses to the progressive incorporation of traditional stories with modern music and dance.

Through the foundation, young Australian musicians are inspired to come to New York and work and play with their fellow best from around the world, and in so doing they inspire all of us.

The institution's founder Heather de Haes shared with me her impressions of the back-to-back evenings:

The music was of the highest standard and this evening showcased the diversity and artistry of the Swiss Global Roster. It was an honor to be part of this event and I hope to see this foundation prosper and grow in the future. 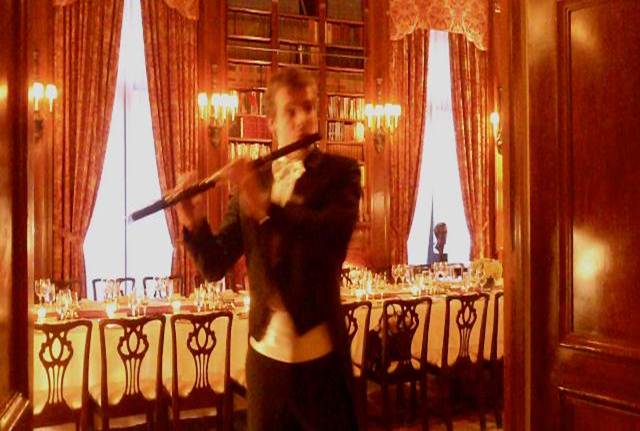 Heather, originally from Australia, formed the Swiss Global Artistic Foundation (SGAF) in 1999 as the Anglo-Suisse Artistic Foundation. Changing its name in 2006 to reflect international growth and broadening horizons, the foundation holds charitable status in the United Kingdom, Switzerland and the U.S.

With London, New York, Geneva and Montreux as its centers of support, the foundation includes an internationally-selected artists' roster as well as a worldwide network of Friends' organizations. SGAF maintains a global reach across Europe and Asia, including Australia -- where Heather de Haes is originally from. In its nine years of existence, the foundation has assisted over 60 artists from 18 countries, and produced as many artistic events.

It is generally accepted that organizations such as the Swiss Global Artistic Foundation are essential to the continued vitality of the cultural values and traditions which enlighten our lives. The foundation is unusual in its ability to benefit young artists while providing resonant cultural experiences for its friends and supporters. The Swiss Global Artistic Foundation "Tree" illustrates how the Foundation has been structured in order to attain its objectives. 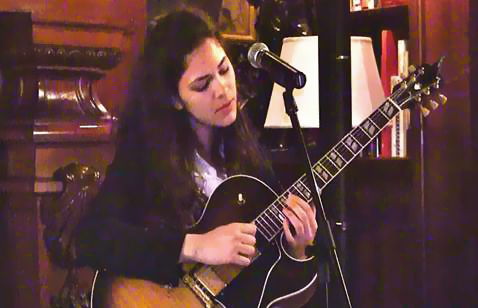 Other Swiss Global Foundation artists include three pianists from around the world: David Fung of Australia and Ryo Yanagitani of Canada, and Jean-Sélim Abdelmoula of Switzerland. Another foundation alumnus is my favorite violinist, Hahn Bin, whose debut at Carnegie Hall I covered.

Towards the end of the evening, Michael Murdoch addressed the group, stating that the next Foundation event would be in Palm Beach, where the hosts would accommodate 40 from New York. He also mentioned that proceeds from that event would generously go the organization I founded, Orphans International Worldwide (OIWW). 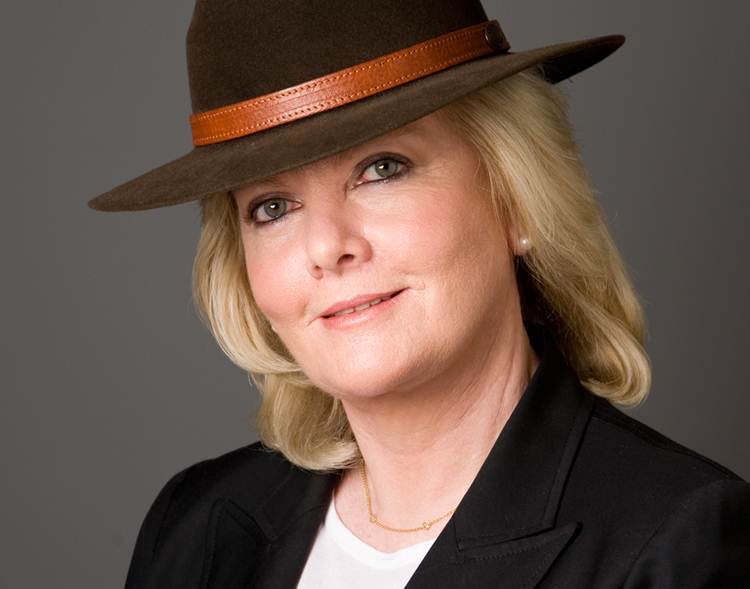 I was so pleased to be introduced to the Swiss Global Foundation in such an elegant evening, and so appreciative to Michael for introducing me to its spirit and founder, Heather de Haes. Heather shared with me her concern:

SGAF provides opportunities for musicians in a world where the arts are increasingly endangered. Since the global economic crisis, the arts have been plunged into a deepening crisis, which is exemplified by the recent bankruptcy of several orchestras. Budget cuts by the government and a strained philanthropic society have meant lean times for artists of all disciplines. It is for just this reason that foundations such as SGAF are so important.

It is thought leaders and global citizens such as Heather that allow for humanity to cleanse itself from the poverty and despair of the world around us. Through her celebration of life and art, and her sensitivity to the needs of the less fortunate, she provides the perfect balance of civilization. 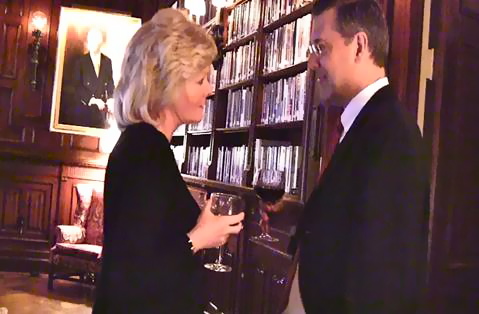