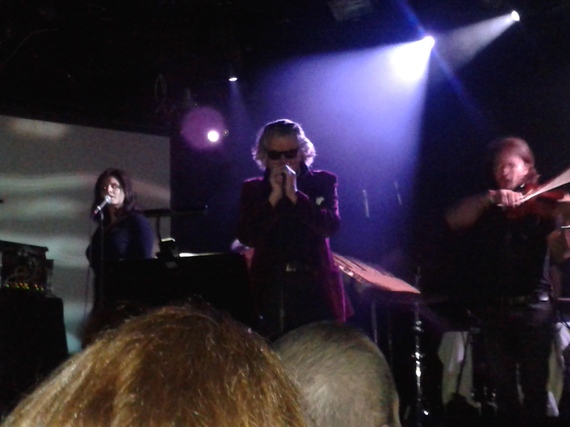 Meier, strolling out in a red velvet jacket and shades, looked like he could play the regal vampire Tom Hiddleston's uncle in Jim Jarmush's Only Lovers Left Alive. Dieter Meier, the legendary voice behind the Swiss electronic pop pioneers Yello, renowned for the '80s underground hits "Oh Yeah" (featured in Ferris Bueller's Day Off and The Simpsons) is a true Renaissance artist, making films and writing books; in 2013 he was the subject of a solo exhibition, "Dieter Meier and the Yellow Years," at The Watermill Center in Long Island. His music is a combination of Brecht, Weill and Leonard Cohen. Though raised in a banking family, he has redeemed himself by being a poker player, an activist and now runs an organic sheep farm with the decidedly Swiss viticulture in Argentina.

His presence in New York is due to the generosity of Zürich Meets New York: A Festival of Swiss Ingenuity, a week of events highlighting the contemporary relevance of visionary movements and ideas born in Zurich and their impact on American culture. It is all building up to the 100th anniversary of the Dada movement and Zurich's role as a 21st century hub for artist and scientific innovation.

One of nice surprises of this festival, besides falling in love with Dieter, was sitting next to a real live Nobel Prize Winner... Kurt Wüthrich, the 2002 winner for chemistry. Never happens at Starbucks.

At another Swiss Fest event, Elizabeth Bronfen, Professor of English and American Studies at the University of Zurich, talked about her latest book, Night Passages, which maps the cultural history of the night in literature and films. She was joined on the New York Film Academy stage by Anastas Michos, cinematographer of Freedomland and Mona Lisa Smiles. Unfortunately it was hard to hear her some of her serious thoughts but Michos was enlightening, sharing the artists' approach to shooting darkness and delivering the right look for a scene. He, analyzed the film clips of Taxi Driver along with his own Freedomland and Untraceable. Moderator Ben Cohen could use a new adjective to substitute for his exhausted 'fantastic,' though he did mention that his new film with penis in the title is soon to (ouch) come.