First I was married to a man who was totally wrong for me. He hid behind the newspaper for hours and ignored me when I tried to talk to him. He was an absent father to his two adorable daughters. He hated anything to do with household chores or gardening, so it all fell to me. I became bitter and resentful and felt very sorry for myself. On Valentine's Day, as other wives got flowers, I got zippo.

Now I am married to a man who loves me to my toes, who brings me his special homemade latte in bed every morning along with the paper, who takes his turn doing the dishes or cooking when we're home, and when he sees a certain look on my face that says the kitchen is closed, suggests we go out to dinner and a movie. He could not be more wonderful. Oh yes, p.s. I get fresh flowers every couple of weeks.

Oddly enough, it's the same man.

We married each other before our brains were fully formed. He was twenty-one, I barely twenty. On our dates, he was attentive and fun. We liked the same things: movies and great food in fun restaurants. After he graduated, we wanted the security of each other, so without giving ourselves a minute and thinking it through, and without my even being pregnant (without even having sex yet - imagine that), we committed to each other for life. We had no idea how different we really were and what we wanted from each other.

I wanted passion, and play, and romance, and I wanted him to bring me flowers, like in the movies. He wanted to get the bills paid and to make sure our life insurance policies were the best ones. I made picnics for us to share by babbling brooks; he wanted to stay home and discuss tax-free municipal bonds with his broker. It felt as if I was fifteen and he was sixty. But that was just the beginning of the surprises to come.

I assumed our marriage would look like my parents' marriage, in which, on weekends, my hard-working father mowed the lawn and planted flowers while my mother made him a fluffy coconut cake. We get these pictures in our minds, especially when we're young and dumb. On the first warm weekend in spring, I started assembling the ingredients for coconut cake.

It was then he appeared with his golf clubs just long enough to say goodbye and good luck, and that was the program all summer. When it was wintertime, the time my father spent in the basement in his workroom repairing things, my husband grabbed his skis and left. It was a total surprise to him that I expected him to shovel the walks, as he informed me then that his mother had always done that job.

Over the next few years I had two baby girls, and we were abandoned almost every weekend. This made me very cranky, lonely, and desperate for another partner who realized I was alive and who cared about us and who could actually be there for his little girls.

I went to a psychiatrist and told her I wanted to run away. I told her all the reasons why I could not stay married to this man.

She asked if maybe she could meet this dreadful person and see if we could change him or if I should just run away. She said she had helped several women get out of marriages to truly psychotic, abusive husbands, and she'd be delighted to help me too. "But just to get a reality check on the situation, would you ask him to come to me for one hour?" she asked.

To my surprise, he agreed to go.

"Well," she said, when it was my turn again, "I have to tell you that a lot of very inadequate men have come through this door and sat in this chair over the years. Your husband is not one of them. Frankly, he is a very mentally healthy man, and a peach of a guy. I think perhaps," she said, looking hard at me over her glasses, "we should work with you." He had obviously fooled her.

On the off chance that I could learn something, I decided to give her one more chance to see things my way.

She had work in store for me. "I want you to catch him doing something right, will you, please? Any little thing. And thank him like you mean it."

Since he was in town all week, I noticed that he helped me clear the dishes, which he'd done every night he was home, but I had just taken it for granted. "Thank you for doing this," I said to him. "It's a big help." He looked startled.

The next night he took us all out to dinner.

I thanked him for bringing in the mail. I thanked him for taking the girls for a walk. Catching him doing something right had a peculiar effect on him. Now and then he actually did the dishes. The things we discussed had changed, too. Instead of whining to him about all the repairs he was neglecting, I told him the good news of the day and he stopped ignoring me. After several months of visits to the shrink, she told me I was doing a good job of changing my husband. Finally, it dawned on my razor-sharp mind that I was changing me. It's a rule we all know but forget so often: catch someone doing something right, thank the hell out of them, and you will have them in the palm of your hand.

"You've done a lot of work and I congratulate you," said the shrink. "Now it's his turn. You've earned it."

He agreed to go again. "Do you want to stay married to this woman?" she asked him.

"Well, of course," he said, glancing at his watch.

"Then we need to discuss your family trips. Your vacations center around skiing or golf, things you love."

"Well, that's easy. I don't like beaches. All that sand. And I hate to swim. I'm not a good swimmer." He glanced at his watch again.

"Okay. Then let's go back to the first question."

He stared at her. "Well of course I want to stay married to this woman."

"Look at me, not your watch, you stubborn bastard!" she shouted at him. "Try to grasp this concept! Your marriage is at stake! Beach. Warm water. Fish. Scuba. Snorkel. Make some reservations. Now. Or shall I just go ahead and call the lawyers?"

He staggered out of her office a newly terrified man.

That afternoon, he made reservations for a Hawaiian vacation for four. We had the time of our lives. He learned to scuba dive with me, and he is the one who has to pull my fin when it's time to go up, as I could live down there and finally run out of oxygen. Perhaps our shrink, listening to my childish romantic fantasies, realized that what I need is a responsible guy to keep me from floating away completely, and what he needed was a romantic butterfly to get his head out of his income taxes and have some new adventures.

I don't know if our marriage will make it yet, but we're coming right onto fifty-two years, and we agree that around forty of them have been wonderful. He still loves his golf, and when he's skiing, our two daughters and four granddaughters race right past him.

"Remember, the hard work of staying together is an investment," the shrink had said. "It doesn't take much to catch your partner doing something right and thanking him. If you can do it, you'll discover the joy of sharing the same grandchildren." Was she ever right.

Oh, yes. About the flowers. Of course he still doesn't buy them. I decided to grow up and buy them for myself when I go to the grocery store. I always pull out a few and put them in a bud vase on my husband's desk.

I have come to realize what is a really sexy sight: an earnest, responsible man paying his bills and paying his taxes. I have taught him the joy of underwater life. He has taught me the sexiness of tax free municipal bonds. If that's not love, I don't know what is. I'll take it in a heartbeat.

Below, a photo of Terrell and her husband on the French Riviera. 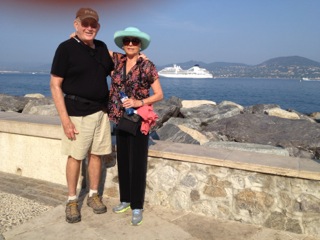