A good character arc with a life-changing event and a hint of nostalgia can be a powerful thing, regardless of how mediocre the film that enables it may be. Coming-of-age films generally blossom from the crossroads of youth and adulthood, so the SXSW Film Festival, with its tradition of supporting Mumblecore and other young American (filmmaking) bodies, has always had plenty such films on offer. However, as more "adults" delay growing up and the idea of extended adolescence takes root, that seminal moment when one comes of age appears to have been postponed. While the high school or college kid who is never the same after one crazy summer/school play/love affair is still kicking around, now there are also driftless 20-somethings just trying to figure out what they want to do with their lives, busy 30-somethings afraid to contend with marriage and parenthood, and the coming-of-middle-age story, in which those 40+ are either still trying to get their shit together, or forced to confront the consequences of their choices.

The genre is also finally including more female protagonists whose experiences are not solely catalyzed by the events of a relationship. In Robbie Pickering's Natural Selection, Linda's (Rachel Harris) oppressively religious husband confesses to having an estranged son outside of their marriage, but it is her journey to find the boy, rather than her husband's betrayal, that changes and empowers her. The festival jury (including Roger Ebert) showered this film with awards, and while I was not quite as bowled over, I appreciated the unusual path of the narrative, as well as the frank portrayal of a middle aged woman's sexual and marital frustration. In Annie Howell and Lisa Robinson's Small, Beautifully Moving Parts, tech-obsessed 30-something Sarah Sparks (a wonderfully natural breakout performance from Anna Margaret Hollyman) is forced to confront her issues with commitment and abandonment on the heels of an unexpected pregnancy. In a twist on the traditional, Nine Months-type gender roles of parental coming-of-age stories, Sarah's supportive boyfriend is thrilled about the child while she mulls over her broken relationship with her irresponsible mother. 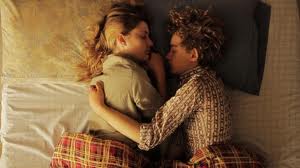 Back in the land of the 20-somethings, Alison Bagnall's The Dish and the Spoon features Greta Gerwig fleeing her cheating spouse and taking up with a young runaway. Female anger is rarely explored onscreen, but Bagnall has Gerwig raging, shouting, and blowing her way through her stunned teenage paramour's life like a hurricane. What changes this character is not the failure of her relationship but her ability to connect with her anger. Unfortunately, the meandering plot and twee little details make this film less satisfying than its refreshingly feminist politics. In Evan Glodell's Bellflower, Woodrow (played by Glodell) comes of age by fantasizing about his anger rather than giving into it. Woodrow and Aiden (Tyler Dawson) are childhood friends whose aimlessness in day-to-day life is matched only by their passion for building flame-spewing machinery to "prepare for the apocalypse." When Woodrow is burned by his first love, Glodell trades in the surprisingly well executed bro banter for a lengthy sequence in which his hero imagines the twisted, uber-violent series of events that would occur were he to seek revenge on the girl who broke his heart. In other words, the only apocalypse in sight is an emotional one, a metaphor for the devastation a failed relationship leaves behind. 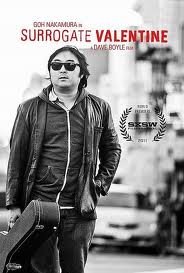 If The Dish and the Spoon and Bellflower explore the need to express anger, David Boyle's Surrogate Valentine does just the opposite, following an older musician whose friendship with the actor cast to play him in a film jolts him out of his social torpor. The film has a touch of that documentary/fiction straddling that is all the rage nowadays; the appealingly moon-faced Goh Nakamura is a very talented real-life musician essentially playing himself, and the script is based on a conversation he and Boyle had about their inability to sustain relationships while constantly focused on creating work and being on the road. The film's more contemporary sense of narrative style and character development, with the loose plot and minimalist dialogue, contrasted nicely with the elegant black-and-white cinematography, which was a pleasant throwback to the 90's indie movie.

Somewhere between Woodrow's aggression and Nakamura's inertia are the group of friends who come together once a year to play football in Kyle P. Smith's Turkey Bowl. Rather than approaching adulthood over the course of the film, Smith's realistically neurotic characters find themselves dealing with the mixed consequences of having accepted it; issues like flagging friendships, tension over new relationships, and the expression of long repressed insecurities. While the film is sometimes repetitive in its play-dialogue-play pattern, Smith's debut film features beautiful camerawork and a confident handling of the tricky construction, quotidian, overlapping conversations and naturalistic style that already have critics pegging him as the next Robert Altman; a not inaccurate comparison, and one I feel the filmmaker might live up to when he comes of age.