Music has become something we consume in the background while we do a million other things. When was the last time you put on an album and listened to it intentionally? Daniel Burwen, creative director of Cognito Comics, posed this question at the "Reinventing the Graphic Novel for the iPad" panel at SXSW.

The book is the one thing that most profoundly counters this fragmented culture. When you go on vacation you take a book with you to detach and unwind. But books, too, have gone digital. So how can we add value to our media when we go digital?

Burwen's perspective on this question changed when he read "Overthrow" and "All the Shah's Men" by investigative journalist Stephen Kinzer, which got him thinking about telling the stories of other countries and people, instead of stories about Tony Hawk (which was the type of thing he'd generally been doing until recently). He placed this in the context of comics after he read "Torso," a graphic novel by Brian Michael Bendis. "It changed my thinking on what a comic could do," Burwen said. 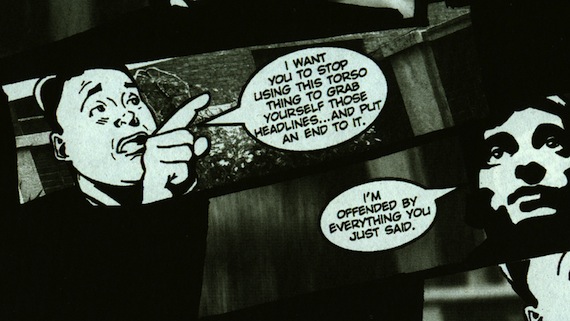 Burwen started work on "Operation Ajax," a graphic novel retelling of Kinzer's "All the Shah's Men" that took three years to complete.

In making the conversion from page to screen, they kept in mind the most important part of a comic's language -- the page turn, which requires every page to end on a cliffhanger. This turns into a challenge when you want to put a page of comics on a phone screen.

On "Ajax," they sought to add motion and sound to heighten the drama, while preserving the soul of the comic. With each tap of the screen, you move from one panel to the next (each page in a graphic novel is composed of multiple panels). The content dynamically recomposes itself as you change panels -- the music slightly alters, as do the images. There's a faint soundtrack, a siren can be heard ringing if it's in the text, speech bubbles pop up all over the screen as the crowd chants -- it creates a film-like setting that aims to enhance the experience without interfering with the reading.

During the Q&A, a woman said she found comics difficult to read when she was young not because of the storylines or quality of illustration, but because there was simply too much information on the page. She found something to distract her attention at every turn. The iPad motion comics, she said, seem to be a solution to that problem. Burwen nodded, and said when he read and watched "The Watchmen," he hadn't been nearly as engaged by every individual panel as he was going through the motion comic (cheesy voice-over not withstanding).

Now we're wondering: could the iPad actually improve on the graphic novel, in the way Bjork's Biophilia app seems poised to revolutionize albums?

Watch the trailer for "Operation Ajax":

CIA : Operation Ajax for the iPad from Cognito Comics on Vimeo.