Blistering sun. A stunning, unforgiving landscape. Crippling boredom. A vague but constant sense of menacing danger. Such is a day in the life of three border patrol agents stationed at a remote southern outpost as depicted in first-time writer/director Greg Kwedar's bold and provocative debut, Transpecos, which premiered this week at the SXSW Film Conference in Austin, Texas. 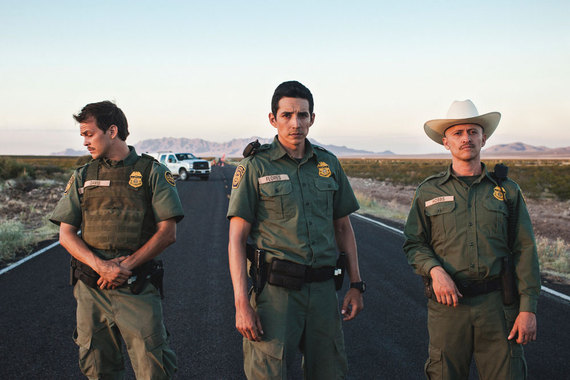 The agents in question are portrayed by the stellar lineup of Clifton Collins, Jr., Gabriel Luna and Johnny Simmons. The three are enjoying an easy camaraderie, breaking up a monotonous shift with their companionable ribbing and makeshift batting practice, when suddenly that vague danger shifts into sharp focus with an explosive burst of violence. The agents dig themselves into deeper and deeper holes, testing the limits of their friendship and fraternal bonds as they burrow into the heart of desert darkness.

Never overtly political--especially given our current border debates--but always wholly humane, Transpecos simmers with the slow burn of quiet desperation. Kwedar's bold debut is an exploration of the shifting borders between right and wrong, loyalty and dishonor, all brilliantly set against the backdrop of Jeffrey Waldron's wondrous cinematography.

We caught up with Kwedar, his co-writer and producer Clint Bentley, and actors Clifton Collins Jr. and Johnny Simmons in Austin a few hours before their world premiere. The four were thoughtful and engaged, eager to examine the themes of the film. What becomes clear is that terms like "ours," "theirs," "us," and "them" are human constructs, ripe for misunderstanding. What's even more clear is that Kwedar is a talent to watch.