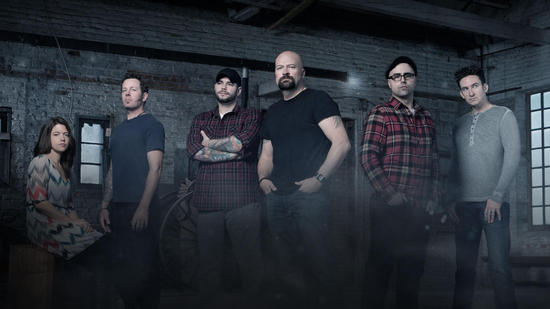 Onto the next? Not on Syfy, at least. After more than 200 episodes, and nearly 14 years of seeking proof of the paranormal, Ghost Hunters will be ending its run on the network following Season 11, which premieres Aug. 3, according to its star.

In the post, Hawes said, "With heavy heart we want to inform everyone that we are choosing at this time to end our relationship with SyFy channel."

He went on to write, "We've been one of their top rated and top watched shows since TAPS and Pilgrim Films decided to join forces and create the show Ghost Hunters."

He also added Ghost Hunters may return in another form: "There are some huge things in the works with TAPS, Ghost Hunters, Pilgrim Films and so much more."

Debuting in 2004 on the erstwhile Sci-Fi Channel, the legacy of the docusoap, where a team of investigators (The Atlantic Paranormal Society) seek to debunk or affirm claims of ghostly activity, cannot be ignored. The show was a hit for the network for a while, and at its peak, pulled about three million viewers per episode. It is heretofore Syfy's longest-running series, and ushered in an era of similarly-themed reality-TV shows. But the series, arguably with the exception of Travel Channel's long-running Ghost Adventures, is the only one to truly become part of the pop culture lexicon and break through to the mainstream.

Co-founders, and original co-leads, Grant Wilson and Hawes (famously Roto-Rooter plumbers by day, busters by night) appeared on late-night talk shows and The Today Show, and the series was spoofed on Saturday Night Live, and South Park. It spawned spinoffs, live episodes, merchandise, apps, and ghosthunting events at famously "haunted" landmarks. The Ghost Hunters lingo, and use of night vision cameras, and other gadgets, could also be felt throughout movies and scripted TV, such as Paranormal Activity, The Conjuring, and Supernatural, among others.

However, the end of the series comes as no surprise as Syfy has shifted away from the paranormal reality-TV craze and re-centered its focus on scripted science-fiction programming. And while still a solid performer for the network, Season 10 averaged 880,000 viewers with a peak of 1.15 million viewers.

As for the announcement itself, Hawes' post suggests it was his and production company Pilgrim Films' choice to wrap the show's run on Syfy, instead of being canceled by the network. Thus far the network has not made a statement.

Regarding the promise for what's ahead, it is possible the show could have a life elsewhere. For example, the Discovery Networks channel Destination America has shifted to a primarily paranormal programming slate. Plus, while it may not fit on Syfy any longer, the brand itself is strong enough (and relatively inexpensive to produce) that a streaming network looking for unscripted shows could conceivably swoop in and pick it up.

Speculation aside, the end of Ghost Hunters at Syfy is an end to an interesting era at the network. The existence of the paranormal may not have ever been conclusively proven on the show, but the series leaves behind evidence of a Syfy legacy.